This article discusses the various types of number plates that are currently used in Nigeria. In Nigeria today, having a vehicle-specific number plate attached to the front and rear of the vehicle is one of the requirements for it to operate on our roads. The Federal Road Safety Commission (FRSC) is in charge of assigning number plates to eligible drivers. Number plates in Nigeria typically measure 6.0 x 11.8 inches and feature the Nigerian flag, coat of arms, State name (Abuja, the FCT inclusive) and motto, and a special ID number. There are various types, though, and they serve various purposes as we shall see below. Also check out our article on how to verify number plate in Nigeria. 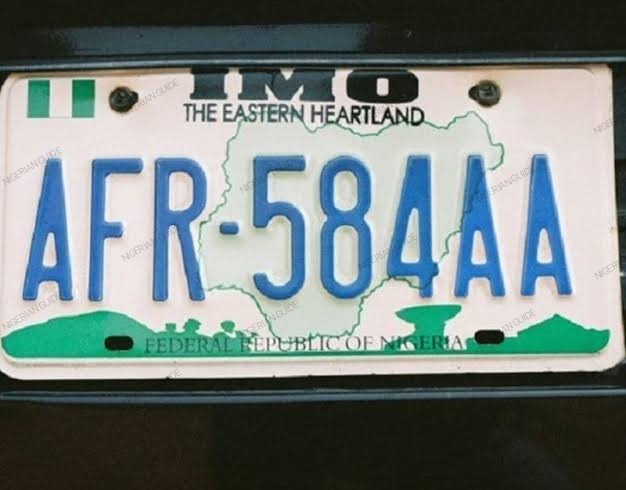 The following are the various types of number plates available in Nigeria today:

Vehicles intended for commercial use receive commercial number plates from the Federal Road Safety Corps (FRSC). Within Nigeria, these vehicles may be used to transport goods or passengers. Common vehicles with commercial license plates in Nigeria include: rental cars, taxis, delivery vehicles, school buses, cargo vans, flat beds, moving trucks, fire trucks, septic trucks, construction vehicles, and other heavy vehicles. Commercial number plates issued by the Federal Road Safety Commission (FRSC) can be identified by their white background and red lettering; the name of the State and its slogan, however, are printed in black.

The FRSC issues private number plates to people who have cars that are only used for personal transportation. In situations where there would be no fee for the transportation, vehicles with private number plates attached may be used to move either goods or people. Private license plates have a white background with blue lettering, but the State’s name and slogan are printed in black.

In Nigeria today, powerful people, famous people, and anyone who can afford it can request a Special number plate, also known as a customized number plate from the Federal Road Safety Commission (FRSC) for a variety of reasons, including making their cars stand out and be more easily recognized, conveying an air of style and class, and promoting a brand. Profane, offensive, or obscene messages are not allowed to be written on special number plates, but the owner of the vehicle is free to write whatever they want. On the highways, it is a sign of status. The only difference between this type of number plate application and those for other types is the price.

In Nigeria today, there are three different types of diplomatic number plates: Corps Diplomatique, Corps Consulate, and Corps Technique. The Corps Diplomatique number plate is given to ambassadors and other diplomatic representatives of nations with which Nigeria has bilateral ties. Since it is distinct from the other types of number plates covered in this page, this sort of number plate is simple to identify. This kind of number plate has “CORPS DIPLOMATIQUE” written in place of the State name. Theirs has a neon purple backdrop instead of a white one, with white text. The country of the car’s owner is indicated by the first two or three letters of the number plate, which are followed by two further letters and a number.

Only vehicles intended for use by the paramilitary and armed forces of Nigeria are given this type of license plate number. These number plates are distinguishable by their black writing and white backdrop.

Registering for any of the aforementioned plate numbers in Nigeria is a simple process. Filling out the application form at https://nvis.frsc.gov.ng/VehicleManagement/RegisterVehicle/ is the first step in the procedure. Then, visit the closest Vehicle Licensing Office with the completed application form, a copy of your driver’s license, evidence of your residence address, proof of the vehicle’s registration, and any other required supporting documents as directed. To find the approved centers in your State, go to https://nvis.frsc.gov.ng/Home/approvecenter.

The pattern “XYZ234AB” is unique for number plates in Nigeria, where “XYZ” stands for the Local Government Area where the car was registered. Every vehicle has a different set of the following alphanumeric characters: “234AB”.