In this article, we have compiled a list of the top 5 richest medical doctors in Nigeria this 2023. These doctors have distinguished themselves in their medical careers and some have gone on to achieve great success in other fields while amassing mind blowing wealth in the process. While some were educated abroad and still practice there till date, others were trained at some of the best universities to study medicine in Nigeria. 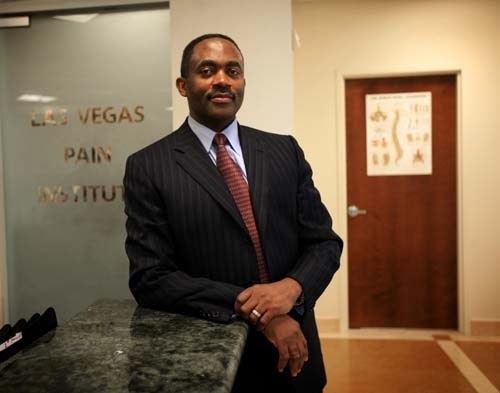 The field of medicine is a very diverse one and in it, there are many accredited medical courses in Nigerian Universities that one can choose to major in. Apart from the prestige that is attached with studying medicine or any medical related course in the country, one thing that catches the eye is medical doctors salary structure in Nigeria, something that ensures that medical practitioners earn comfortable pay while on the job. Fresh graduates in the medical field are not left out as housemanship salary in the country also guarantees that starting your career in the medical world isn’t a painful one.

LIST OF THE TOP 5 RICHEST MEDICAL DOCTORS IN NIGERIA 2023

Below are the 5 richest medical doctors in Nigeria 2023:

Dr. Godwin Maduka is a renowned Nigerian medical doctor based in the United States. He is one of the richest medical doctors in Nigeria worth several billions of Naira and he is the founder of the Las Vegas Pain Institute and Medical Center, a prestigious hospital with several branches in the USA. Godwin Maduka was born in 1959, he is a native of Umuchukwu town in Anambra State and he is an accomplished businessman and philantropist.

While growing up, Dr. Godwin Maduka attended the Nawfia Comprehensive Secondary School and All Saints Grammar School, Umunze, for his secondary education and after getting his SSCE, he got provisional admission at the University of Port Harcourt to study Medicine and Surgery but because of financial constraints, he could not go on to study his dream course. He later got an opportunity through a friend to study at Rust College, Mississippi, USA on a scholarship that covered half of his tuition and was supported financially by his younger brother and uncle in order to move to America in 1982.

Godwin Maduka graduated in 1984 with the highest distinction in chemistry from Rust College and got another scholarship to study pharmacy at Mercer University, graduating in 1988. Upon graduation, he briefly worked as a pharmacy technician, before getting a full scholarship to study medicine at University of Tennessee, where he completed an internship and graduated in 1993. He proceeded to Harvard Medical School and Beth Israel Deaconess Medical Center for his post graduate training and residency in anesthesiology, critical care and pain management, graduating in 1997.

Dr. Maduka, upon successful completion of his studies, moved to Las Vegas in 1997 where he got a job where he was paid $8,000 as an advance payment. He worked as an anesthesiologist at Desert Spring United Methodist Church, Nevada and other hospitals, before starting his own practice at Red Rock Medical Group, Nevada. In 1999, he founded Las Vegas Pain Institute and Medical Center, a hospital that is well recognized in the United States and has since expanded to six branches altogether. He is a clinical faculty supervisor and adjunct professor of pain management and anesthesiology at Touro University Nevada. He is also a clinical assistant professor of surgery at UNLV School of Medicine.

Back home in Nigeria, Dr. Godwin Maduka is responsible for constructing the largest medical research centre in West Africa, A 17-storey ultramodern research facility that is dedicated to the advancement of medicine and medical sciences in Africa. This building is located in his hometown of Umuchukwu in Anambra State. Dr. Maduka, through his foundation, The Godwin Maduka Foundation runs a philanthropist organization that has impacted lives, within and outside his home state. He is responsible for investing over $20 million in various community development projects in his community such as: building of churches, hospitals, police college and academy, over 100 standard houses for widows and the less privileged in his home town, primary and secondary schools with buses donated as well, police station, magistrate court, monasteries for churches, town hall, palace for the monarch, civic centre, houses for clerics, Five star hotel known as Lion of Africa Resort to mention but a few.

While Dr. Godwin Maduka’s net worth is over ₦500 billion and he owns many landed properties in Anambra State and the estate where he lives in Nigeria cost quite a fortune. It is reported that the seven residential properties he bought in Nevada cost more than $7 million and that the complex which houses the Las Vegas Pain Institute and Medical Center is estimated to cost just over $5 million. The Institute has more than 80 employees on payroll. Dr. Godwin is married to Stella Maduka and they have five children.

Dr. Ambrose Bryant Chukwueloka Orjiakor, widely known as ABC Orjiako is another top medical doctor in Nigeria that is very popular and is worth several billions of Naira. He is the Chairman and co-founder of Seplat, a leading Nigerian independent oil and gas company listed on the London and Nigerian stock exchanges with a strategic focus in the Niger-Delta region of Nigeria.

Dr. ABC Orjiako was born on October 2, 1960 in Calabar, the Cross Rivers State Capital. He is a native of Umuchima, Uli, Anambra State, Nigeria. His primary and secondary education were completed Uli and he majored in the sciences while in secondary school, passing out with Grade 1 in the process. A highly cerebral student, Orjiakor proceeded to study medicine and surgery at the University of Calabar, becoming the best graduating student in 1985, his graduation year.

Dr. ABC Orjiakor, upon successful completion of his medical studies, proceeded to the Lagos University Teaching Hospital (LUTH) and thn the National Orthopedic Hospital in Igbobi, Lagos to be trained in orthopedic surgery and trauma management, his specialty. Over the course of his medical career, he became a Fellow of the West African College of Medicine and the Nigerian Postgraduate Medical College.

In 1996, Dr. ABC Orjiakor ventured into full time business, investing in the oil and gas, pharmaceutical, shipping, banking, and insurance sectors of the economy. He is the Chairman/CEO of Some of the following companies:

He is also a board member of the Nigerian Chamber of Shipping as well as Green Resources ASA, a Norwegian company investing in Tree Farms in East Africa. The company for which he is well known for is Seplat Petroleum Development Company Ltd, an oil and gas firm he co-founded in 2010 which took over the operation of a Join Venture asset from Total, Eni, and Shell, the first indigenous company ever to achieve such feat.

In September 2017, Dr. ABC Orjiakor officially became the first tenant of the Eko Atlantic City, when the Alpha 1 Office in the international commerce city was acquired for use by his company Seplat Petroleum Development Company. He is currently worth over ₦400 billion.

Not many people expected to see Bukola Saraki in this list and many Nigerians do not have the slightest clue that he is a medical doctor. Dr. Bukola Saraki is the Former President of the Nigerian Senate (2015-2019) and also a former Governor of Kwara State (2003-2011). He is an astute politician and a medical doctor by profession.

Dr. Olubukola Abubakar Saraki was born on December 19, 1962 in London, to the Saraki family. His Father, Olusola Saraki was a strong man in Kwara politics as well as a one time Senator of the Federal Republic of Nigeria between 1979 and 1983. Dr. Bukola Saraki attended the Corona College, Lagos, before proceeding to King’s College, Lagos to complete his secondary education in 1978. Between 1979-1981, he attended the Cheltenham College, a high school affiliated to the Church of England in the United Kingdom where he obtained his high school certificate.

Upon completion of his high school education, Bukola Saraki proceeded to the London Hospital Medical College of the University of London to study Medicine and Surgery between 1982 to 1987 from where he obtained his Bachelor of Medicine, Bachelor of Surgery (MBBS). He briefly worked as a medical officer in London from 1988-1989 and returned to Nigeria to venture into politics.

During his time as Governor of Kwara State, Bukola Saraki introduced new health programmes, including a statewide campaign in 2008 to reduce maternal and child mortality from malaria. This included distribution of insecticide-treated nets and free malaria drugs to pregnant mothers and to children under the age of five. A statewide programme of hospital development was also implemented, leading to the redevelopment of hospitals in Afon, Pategi and Lafiagi.

Other measures included improved training and re-training for medical staff; refurbishment of hospitals and staff living quarters; and employment of qualified medical doctors and other health workers. Many of the primary care programmes were sponsored by international agencies such as WHO and UNICEF.

While Dr. Bukola Saraki’s net worth is unknown, he is one of the top politicians in Nigeria presently and as a result of his journey into politics, serving as governor of his state and as the Senate President of Nigeria, his wealth has increased significantly over the years and it is rumoured to run into several billions of Naira.

Dr. Chris Nwabueze Ngige is the former Governor of Anambra State (2003-2006) and a former Senator of the Federal Republic of Nigeria, representing Anambra Central Constituency (2011-2015). He is the current Minister of Labour and a Medical Doctor by profession.

Born on August 8, 1952, Ngige attended the University of Nigeria, Nsukka where he graduated with a Bachelor of Medicine, Bachelor of Surgery (MBBS) degree in 1979. He immediately went into the civil service, serving at the National Assembly and State House clinics at different times. Dr. Chris Ngige retired from the medical profession in 1998 as a Deputy Director in the Federal Ministry of Health.

He is still very active in politics and continues to take up one role after the other, significantly adding to his net worth. As of 2022, Dr. Chris Ngige is reported to be worth $70 million which is just over ₦39 billion.

Dr. Olurotimi John Badero is the world’s first and only fully trained cardio-nephrologist (heart and kidney specialist). He was born in Lagos, Nigeria to Chief Eliab Olufemi Badero and Mrs. Stella Taiwo Badero. His father was a fashion designer who later became a typist and administrative manager at Scoa Motors while his mother worked as a secretary with Barclays Bank in the early 1970s.

Dr. Rotimi Badero attended St. Mary’s Private School in Lagos before receiving his secondary school education at Federal Government College Odogbolu, Ogun State. After completing his undergraduate studies at the Obafemi Awolowo University, Ile-Ife, Osun State, he enrolled in the Medical School. He went on to work at General Hospital Isolo in Lagos state before relocating to the United States.

Life in the United States was not easy as he had to come to terms with the harsh reality of survival in a foreign country. He did menial jobs to make ends meet while focusing on how to succeed in his profession in the States. He eventually passed the U.S National Medical exam for foreign-trained doctors and completed a three-year internal medicine residency training at the State University of New York (SUNY) Downstate Medical Center in 2004.

When he’s not practising medicine from his full-fledged medical practice in Brooklyn, New York or travelling the world teaching others, he serves as the assistant pastor of the Redeemed Christian Church of God, Vine Chapel in Jackson, Mississippi. His current net worth is unknown but he sure lives a comfortable life in the service of God and man.