In this post we take a look at the top 10 best and most popular museums in Nigeria currently in this year 2023 and their locations. These are the best museums in the country that you need to visit in your lifetime and etch that memory in your head for future references. The list of these museums in Nigeria that you must see are packed with so many interesting pieces of history that can be found in no other place other than them, so whenever you have the chance, you should make out the time to go see any one of these top tourist destinations in the country. 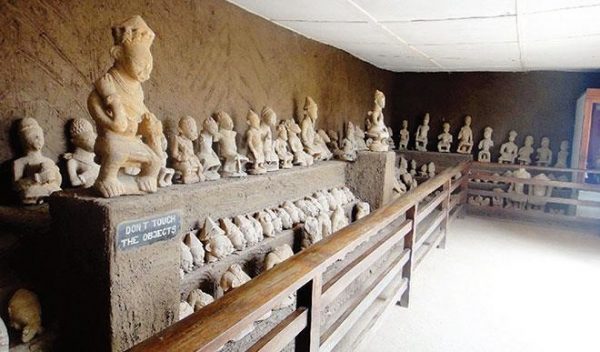 Museums are places where priceless art works, scientific specimens, or other objects of permanent value are kept and displayed. They house the very important history of a people and preserve their cultural heritage for generations yet unborn to take a a full view at the past in order to know how those who came before them lived their lives and how so many events that they may have previously heard of in history class actually played out. In summary, what museums actually do is to take us back in time to help us appreciate the past, understand the present and anticipate the future.

As we proceed, we will look at the top museums in Nigeria, the best 10 in no particular order and we will briefly explain a thing or two about them. The existence of museums in Nigeria can be traced to the 1950s when numerous institutions were created to preserve valuable Nigerian art and culture. However, several years before the 50s, some houses were already preserving artworks and artefacts in the country. These institutions collected valuable ancient artefacts and chose to preserve them at the places where they were found and as this continued, it lead to the emergence of full-fledged museums.

TOP 10 BEST MUSEUMS IN NIGERIA AND THEIR LOCATIONS 2023: FULL LIST

The following are the 10 best and most popular museums in Nigeria this 2023 and their locations:

The National Museum in Lagos State is located at Onikan on the Island of Lagos. It was established in 1957, and since that time to date, it has continued to preserve historical artefacts. It is one of the museums in Nigeria that boasts a wide collection of art works, archaeological excavations and exhibits of ethnography. Whenever you visit this museum, you automatically connect with history. The museum is also home to the car of one of Nigeria’s former Head of State, General Murtala Muhammed. The Mercedes Benz Saloon car is being preserved with its original black colour and bullet holes that serve as evidence of Murtala’s assassination in 1976.

The Jos Museum was established in 1952 and it is located in Jos, the Capital City of Plateau State. The Museum houses so many artworks from Nigeria’s pre-historic times, chief of which are the of Nok terracotta heads and artefacts dating from between 500 BC to AD 200. The Jos Museum also includes the Museum of Traditional Nigerian Architecture which displays life-size replicas of a variety of buildings ranging from the walls of Kano and the Mosque at Zaria to a Tiv village. Some of interesting articles from colonial times relating to railway and tin mining can also be found on display at the museum. A School for Museum Technicians is attached to the museum, established with the help of UNESCO. The Jos Museum is also located beside the zoo.

The National War Museum is located in Umuahia, Abia State and it was established in 1985 and was nominated as one of the seven wonders for tourists in Nigeria. The museum houses relics from the Nigerian Civil War such as war tanks, ships and aircrafts from Nigeria and Biafra alike.

This museum is located in Benin City, the Capital of Edo State and it was established in 1973. The museum houses original Benin bronze sculptures which remind one of the ancient Benin Empire. It also places on display terracotta and cast iron artefacts which have huge history accompanying them.

This museum was founded in 1975, it is located in Kaduna, the Kaduna State Capital and things on display here include interesting ethnographic and archeological artefacts such as statuettes made of bronze and terracotta. The museum premises also serve as the home of traditional village of artisans.

This is the one of the oldest museums in Nigeria, located in Calabar, the Cross River State Capital and it was built in 1884. The museum used to serve as the headquarters of the administration of colonial authorities during the British Colonial Rule in Nigeria until it underwent a transformation into what is presently. The museum houses sound information about the colonial and pre-colonial times in Nigeria. It also displays relics from the slave trade era in Calabar.

The Esie Museum is located in Kwara State and it was founded in 1945. It is  one of the oldest museums in Nigeria and some of the artefacts on display in the museum are simply amazing, breath-taking and captivating. The stone figures displayed at this museum are said to rank among some of the largest in the world and they always capture the attention of people visiting the museum. In the Esie museum, there are two types of gallery which are the ancient and modern galleries situated in it. It is reported that there are about 2000 artefacts that are housed and displayed at this museum. The new gallery houses other items besides the ancient stones. In April every year, there is a festival of monuments at the museum.

The Gidan Makama Museum is located in Kano, the Kano State Capital. It was built in the 15th Century and it served as temporary palace of Kano before the current palace, Gidan Rumfa was constructed in the 15th century. The museum houses important art collections, crafts and items of historic interest related to Kano. The Gidan Makama Museum is the oldest museum in Nigeria and it is located in a 15th-century historical building which is recognised as a National Monument by the Federal Government of Nigeria. It is divided into 11 galleries which include the main entrance hall with displays of traditional materials, city walls and maps of Kano, the history of statehood, Kano in the 19th century, the Civil War, economy, industry and music.

This museum was built in 1863, in Badagry, Lagos and it is a very important museum in our history as Nigerians and Africans. The museum houses many relics from the slave trade of the colonial era and it gives great insight on the events that happened in that time frame, carrying the mind on a journey to the past to connect with our ancient history and appreciate the freedom which we now enjoy.

This museum is situated in Oron, Akwa Ibom State. It houses some of the oldest exhibits on the continent and there are unique relics of the Civil War on display here, most notably the bunker of Dim Chukwuemeka Odumegwu Ojukwu, former military governor of the Eastern Region and the first president of Biafra. The museum was build around 1958/59 but was vandalized and plundered during the civil war, thus preventing it from fulfilling its cultural function. The museum was however rebuilt in 1975 and it houses restored figures of wood which serve as reminders of the culture of the local population in the region.

Igbo Ukwu Museum is located in Anambra State. Igbo Ukwu town is very notable for three archaeological sites where bronze artifacts from a highly sophisticated bronze metal working culture dating back to the 9th or 10th century have been found through excavations. Little wonder the siting of the museum in the town. Artifacts that have been found over the years in Igbo Ukwu, many of which are preserved in the museum located at Aguata include jewelry, ceramics, different bronze, copper, and iron objects, etc.