This article is about the top 10 most popular caves in Nigeria and their locations. Our country, Nigeria is blessed with some of nature’s finest landmarks such as rocks, waterfalls, etc, that serve as important tourist destinations and historical sites. Part of these natural landmarks include caves which in ancient times served as shelters for early settlers as well as hideouts during wars. Kindly continue reading to find out about some of the best caves in the country today and where they are located. 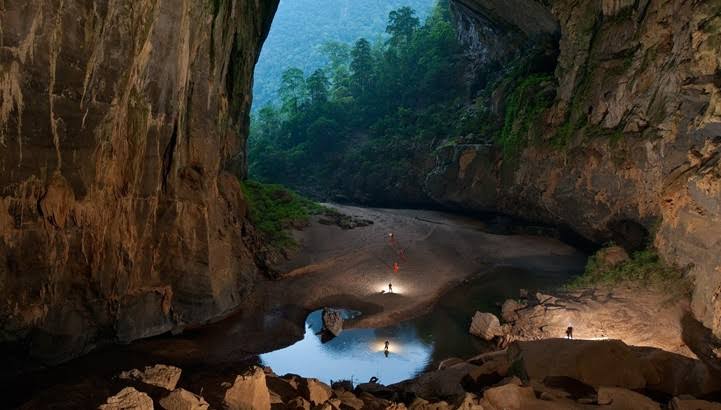 TOP 10 MOST POPULAR CAVES IN NIGERIA AND THEIR LOCATIONS

In no particular order, the following are the 10 most popular and most visited caves in Nigeria today and their locations:

Ogbunike Cave is located in Anambra State, and the beauty about it is that it is a network of caves that are interconnected or linked together by small tunnels and passageways. The Ogbunike cave is arguably one of the most frequented tourist attraction sites in Anambra State today.

Legend has it that this cave has for several years in times past, served as an escape route as well as a hideout for indigenes in times of war and that during the Nigerian Civil War, the cave played a significant role in once again giving shelter to people fleeing for their dear lives in that part of the country as the war raged on.

A stream flows out from one of the tunnels into a rapidly flowing River Nkissa, and every year in the month of May, a celebration known as ‘Ime Ogbe’ takes place to commemorate the discovery of the caves.

Olumo Rock Caves are part of the famous Olumo Rock in the ancient city of Abeokuta in Ogun State. The rock, as well as its many caves served as a natural fortress for the Egba people who were the original inhabitants of Abeokuta during inter-tribal warfare in the 19th century. It provided protection to the Egba people when they needed it and today, it is one of the most visited tourist destinations in the South-Western part of the country.

Owerre-Ezukala Cave is a limestone formation with waterfalls located in Orumba South Local Government Area of Anambra State. It is also known as the Ogba-Ukwu cave, and it is considered as one of the largest cave in West Africa. This particular cave in Eastern Nigeria is composed of four rock shelters, two waterfalls and other beautiful features that makes it truly special. Story has it that one of the compartments of the cave, accessed via the aid of stone steps, has an old elephant’s foot standing, long dead and dry.

Awhum Caves, also known as Ohum Caves, is located in Amaugwe Village, Awhum Town, Udi Local Government Area, Enugu State. The cave which is part of the Awhum Waterfalls, is a tranquil atmosphere for people who love to get away from the busy, noisy life that characterizes major cities. The Awhum Cave is a limestone cave that meanders through a stretch of steep-sided and picturesque hills, which had been dissected in different parts by channels of flowing streams. In the daytime, light sips through the cave from the roof of it through small sinkholes that illuminates the caves making for a beautiful sight.

Edegbake/Oghodoghodo caves are located near Fugar, Etsako Central Local Government Area, Edo State. These prehistoric caves are believed to have been the dwelling place of a community of early men. The smaller of the two caves, Edegbake, can conveniently accommodate 50 persons while Oghodoghodo, the larger one can accommodate about 200 persons. The presence of a slow flowing stream which runs through Edegbake cave makes it possible for amateur fishing in the area, and the place in general where the caves are situated is suitable for excursions, picnics, general relaxation, etc.

The Marshall Caves are located at KM 40, Bauchi-Gombe Expressway, Mainamaji Village, Bauchi State. The caves were discovered in the early part of the 20th century and are a collection of 59 dwellings which have been dug into sandstone escarpments. No ones knows for certainty who used the caves, but it is very obvious that they were once inhabited by people.

Legend has it that local indigenous people in this area used the caves to hide from slave raiders associated with the Emir of Bauchi and/or Arabic slave raiders coming down from the Sahara region. The Marshall caves feature rock paintings and engravings in various lines, presumably created by their initial inhabitants.

The Ihu-Ogba cave is located at the Ezeagu Tourist Complex in Enugu State and it was discovered during the Nigerian-Biafran civil war when the people inhabiting the surrounding area desperately needed hiding places which would also double as their dwelling places. Two major narrow tunnels with three chambers lead into this cave, and the local people believe that the cave is the dwelling place of the Ogba spirits.

Esa Cave is situated beside a mountain that is about 10,000 feet above the sea level. It is located in Ekiti State, south-western Nigeria. The cave is said to originally belong to the Ijoro family of Okesale area, Iyin Ekiti in Ekiti, and it was manned by their fore-fathers who discovered that a cave existed in that area, hence they made it their shelter many centuries ago.

Esa cave is located 6 kilometres away from Iyin Ekiti in Irepodun/Ifelodun Local Government Area of Ekiti State and about 3 kilometres away from Ado-Ekiti in Ado Local Government Area, the Capital City of Ekiti State. The Cave still maintains its natural look while evidence of human activity still exists there till today. It has demarcated rooms separated by low height walls made from mud bricks which has become strong and difficult to pull down.

Also, small boulders used as ‘pillows’ by old occupants still remain in the cave to this day. The cave has an age long history of having been the safe harbor for the Iyin and Ado-Ekiti warriors during the inter-township fight with the Ikere-Ekiti people of Ekiti State. The cave is the third most visited tourist destination after Ikogosi and Arinta Waterfall in Ekiti.

Iho Eleru Cave, also known as The Cave of Ashes is located 24 kilometres south of Akure, Ondo State. This cave is a rock shelter that was formed as a result of the overhang of a massive block of gneiss at the foot of an inselberg. Thurstan Shaw, a famous archaeologist, found the bones of prehistoric man in these caves in the year 1965, and the bones through radiocarbon dating were found to be over 8,000 years B.C. It is a must see tourist site for everyone who loves adventure.

The Amanchor Cave is located at Amanchor in Afikpo South, Ebonyi State in the south-eastern part of the country. The Cave is about 4 kilometres long and is one of the many tourist destinations in Ebonyi. The cave has an entrance with a natural step-like structure that is supported by a wooden ladder constructed by the community. The Amanchor cave is made up of three tunnels, the second of which is called the “window” that opens into its ground floor, and from the “window”, one can see the floor of the cave. The third opening in the cave is known as the “door”. An annual festival known as Orie-Ogba is usually celebrated in the cave on the last Orie market day of the year in December.