This is a list of the top 10 best Nigerian footballers of all time. Our country is a footballing nation that has seen legends come and go. We have produced some of the finest football players on the continent who have gone into the world stage to showcase what they can do in the beautiful game. 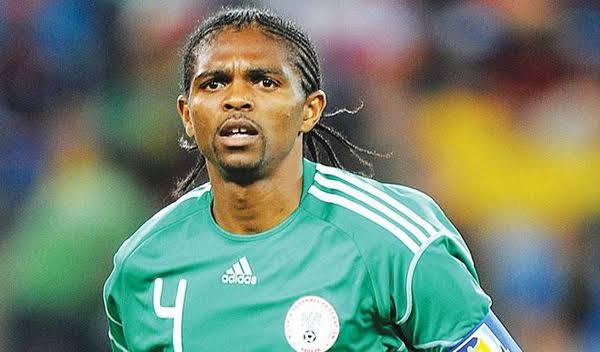 From the likes of Daniel “The Bull” Amokachi, Sam Okwaraji, Benson Iroha, Austin Eguavoen, Peter Rufai, Kadiri Ikhana to mention but a few, many of these greats have performed excellently well to put Nigeria on the map of footballing nations with a rich history but which among this long line of players, past and present, make up our all time list? Kindly read along to find out.

The following are the 10 best Nigerian football players of all time:

Nwankwo Kanu, popularly known as Papilo, is an all time great Nigerian footballer. Now retired, but during his active days, he was full of skills and tricks and was blessed with an eye for scoring goals. Kanu was usually deployed as a centre forward or as a number 10 for club and country and from those positions, he did great damage to opposing teams.

Kanu is one of the most decorated Nigerian players ever, having won major trophies such as the Champions league in Europe where he played his club football for Ajax. He also played for Inter Milan, winning the UEFA Cup there, and was part of the Arsenal “Invincibles” team that went 38 games unbeaten in their 2003-04 Premier league title winning season.

Other clubs he represented in Europe were West Bromwich Albion and Portsmouth where he won the FA Cup for a third time in his career. He also won important tournaments as part of the Nigeria National team such as the Atlanta ’96 Olympic gold medal, and the FIFA U-17 World Cup in Japan in the year 1993. Kanu is also a Nigerian Premier League winner with Iwuanyanwu Nationale (1992-93), currently known as Heartland Football Club of Owerri.

On an individual level, Kanu was named African footballer of the year twice in his career (1996 & 1999) and is highly considered as one of the greatest Nigerian soccer players of all time, if not the greatest.

So good was he that they named him twice. Austin Okocha, popularly known as “Jay Jay” is a former Nigerian international player and Captain of the Super Eagles. He played for the likes of Enugu Rangers, Borussia Neunkirchen, Eintracht Frankfurt, Fenerbahce, Paris St. Germain, Bolton Wanderers, Qatar SC and Hull City.

During his playing days, Jay Jay was often deployed as an attacking midfielder for club and country and was well known for his wizardry on the ball especially in Germany. He would carry on that form to PSG in France, where he served as mentor to a young Ronaldinho, and later to Bolton Wanderers where he was Club captain and icon.

Despite being so good and known for his confidence and trickery with the ball, technique, creativity, flair, close control, and dribbling skills, as well as his turn of pace and his use of feints, in particular the step-over and his trademark turns, “Jay Jay” was never crowned African Footballer of the year by the Confederation of African Football (CAF), still, many believe him to be one of the greatest to have played the beautiful game from Nigeria.

Teslim “Thunder” Balogun, was arguably Nigeria’s first professional footballer and because of his exploits in football which helped paved the way for many to follow after his footsteps today, the Teslim Balogun Stadium in Surulere, Lagos State was built in his honour to immortalize him.

Teslim Balogun had skills and very powerful shots at goal, that prompted his colleagues to nickname him the “Thunder”. He was a very sought after football player who featured a record seven times in the Governor’s Cup and the Challenge Cup finals. “Thunder” began his footballing career in 1947 for Marine, and in 1949 he appeared for Railway. Other clubs he features for in Nigeria include: Plateau in 1951, Pan Bank in 1952 and Dynamo in 1953. He was also a member of the cup-winning Ibadan team of 1959 and 1961.

Because he had played professionally in Europe, Balogun was disqualified from playing for Nigeria in the Olympic qualifying series in 1959. But he returned to play a few international games.

Playing for the Nigeria National Team, Teslim Balogun was part of the Nigerian Red Devils side that held Ghana to 1-1 draw on October 29, 1960, in Lagos. One month later, he also played in Nigeria’s 2-1 loss to the visiting Egyptian team. That football match was arranged to commemorate the inauguration of Dr. Nnamdi Azikiwe as the first indigenous Governor-General of Nigeria. It was Balogun’s last international match.

Despite being a legendary football figure in the country, Teslim Balogun had just six international caps. This is due to the fact that the Nigerian national team had fewer fixtures in those days. He did feature against some visiting foreign sides and produced some impressive displays that are still in the memory of many of those who lived in his time.

One of those matches was a November 5, 1960 football match between the Western Region side and the Congo Brazzaville national side. The tie ended in a draw. Five days later, a Lagos-selected side also invited Balogun to feature for it in the game against Congo Brazzaville. Lagos won 5-0. Expectedly, Balogun was the hero. His beautiful movements rocked the crowded Lagos City Stadium.

Sunday Ogochukwu Oliseh is a Nigerian former footballer who captained the Super Eagles for most of his career. He played as a defensive midfielder but was an early example of a more creative interpreter of this role, who focussed more on ball retention and passing rather than solely looking to win back possession. He was also coach of the Super Eagles after retiring from playing football.

Oliseh played 63 international matches for Nigeria and scored three goals in the process, the most memorable being that long range strike against Spain at France ’98 World Cup group stage match which Nigeria won 3-2. He is part of a select group of Nigerian players that have played for some of Europe’s biggest clubs; playing for the likes of Ajax, Borussia Dortmund and Juventus, among others.

Rashidi Yekini is another all time great as far as Nigerian football is concerned. His iconic goal celebration at USA ’94 where he was seen holding the back of the net after scoring against Bulgaria remains one of the proudest moment in Nigeria’s football history as it was the country’s first ever goal at the World Cup. Nigeria won that match 3-0.

Yekini was a striker who represented Nigeria 58 times, scoring an impressive 37 goals in the process. He was a prolific goalscorer who represented the country in five major tournaments, including two World Cups. He was named African Footballer of the Year in 1993, and was part of the country’s squad that won the Tunisia ’94 Africa Cup of Nations. His professional career spanned more than 20 years where he played for the likes of Shooting Stars of Ibadan, Vitoria Setubal of Portugal, Olympiacos of Greece, Sporting Gijon of Spain, Julius Berger of Lagos, among others.

Segun Odegbami is a Nigerian former professional footballer who played as a forward. He played 46 times for Nigeria and scored 23 goals in the process. Odegbami was part of the country’s first Africa Cup of Nations title triumph at the 1980 tournament which was hosted in Lagos. He scored two goals in the process, with Nigeria going on to beat Algeria 3-0 to lift their maiden AFCON title.

Chief Odegbami, during his playing days was nicknamed “Mathematical” due to his skill on the ball, speed and precision of his crosses from the right wing. Mathematical originated from his days at The Polytechnic, Ibadan, where he studied Engineering. Between 1970-1984, he spent his entire professional career playing for IICC Shooting Stars of Ibadan. His last game for the Club was the 1984 African Champions Cup final defeat to Zamalek of Egypt.

The legendary Stephen Okechukwu Keshi is another all time great who graces this list. He was Nigeria’s captain and manager after his playing days. Stephen Keshi played as a defender and appeared 60 times for the Super Eagles.

He was part of the 1994 FIFA World Cup squad that made the nation proud in the United States and he also took part in the 1994 Africa Cup of Nations in Tunisia, skippering the Super Eagles to victory. Much of Stephen Keshi’s professional career as a footballer spanned five countries in Europe, the most notable being Belgium, where he won the Belgian league championship with R.S.C. Anderlecht in 1991.

Emmanuel Amunike (Not to be confused with Emmanuel Emenike, another Nigerian footballer), is a former Nigerian footballer who played as a winger for the national team and his football clubs during his active playing days. At Club level, he played for the likes of Zamalek of Egypt, Sporting CP of Portugal, Barcelona of Spain and Albacete also in Spain.

At the height of his powers, he was one of the most feared forwards in African football, and was part of the Nigerian national team that dazzled the world at USA 94, scoring against Bulgaria and Italy at the world Cup. His performances at Tunisia ’94 Africa Cup of Nations, which Nigeria won, earned him the African Footballer of the Year award. Amunike was also part of the Atlanta’ 96 gold medal winning team, scoring the winning goal of the tournament.

Christian Chukwu is another all time Nigeria great that played as a defender during his active footballing days. He was the captain of the national team that secured Nigeria’s first ever Africa Cup of Nations trophy in 1980. Much of his professional football career was at Enugu Rangers where he is a club legend.

Mudashiru Babatunde, also known as Muda Lawal, completes this list of the top 10 best Nigerian football players of all time. He played as a midfielder for club and country, and scored the third and final goal at the 1980 Africa Cup of Nations that earned Nigeria her maiden continental title. Muda Lawal was a very reliable team member during his days as a footballer.

On a professional level, he played for Shooting Stars of Ibadan and helped them to their first ever continental title when they won the African Cup Winners Cup in 1976. Muda played 86 times for Nigeria and scored 12 goals in the process. He holds the record of being the only player in Africa to have appeared at five consecutive Nations’ Cup finals between 1976-1984.

He played his last match for Nigeria match on August 18, 1985, when Nigeria lost to Zambia in the 1986 African Cup of Nations qualifier. Other clubs he represented during the course of his football career include Stationery Stores of Lagos and the now defunct Abiola Babes of Abeokuta.

Other worthy mentions include: