In this article, we talk about the biography, history, profile, and net worth of Tiwatope Savage, and more information concerning her. Popularly known by her stage name, Tiwa Savage, this celebrity is a Nigerian music singer, songwriter, entertainer, recording artiste, stage performer, and actress. Regarded as the most powerful female musician in Nigeria currently and one of Africa’s best exports to the world. She is one of the richest musicians in Nigeria currently. 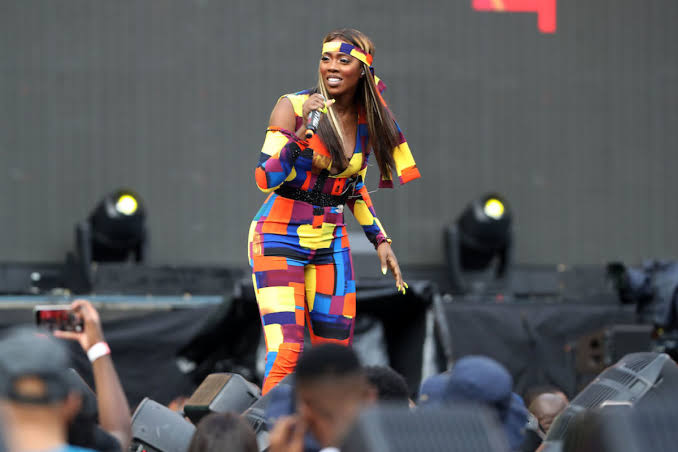 Tiwa Savage continues to blaze the trail in the entertainment industry, being in the process, a source of inspiration to many females out there who want to venture into music. She was signed to Sony/ATV Music publishing, one of the top music brands in the world in 2009 before moving on to one of Nigeria’s top music record labels, Mavin Records owned by renowned Nigerian music producer, Don Jazzy in 2012, before going on to sign for top international music label, Universal Music Group in 2019.

Tiwa Savage was born on February 5, 1980 in Isale Eko, Lagos Metropolitan Area, Lagos State, Nigeria where she was growing up until she turned 11 years old and emigrated with her parents to the United Kingdom. While attending secondary school in London, she mastered how to play the trombone and became an integral part of her school’s orchestra band. Tiwa Savage is an accountant, studied accounting and graduated with a degree in this course from the University of Kent, and started working at The Royal Bank of Scotland.

At the beginning of her music career, she did backup vocals for English singer George Michael at the tender age of 16, and lent vocals to other musicians such as Mary J. Blige, Chaka Khan, Blu Cantrell, Emma Bunton, Kelly Clarkson, Andrea Bocelli and Ms. Dynamite. In 2006, Tiwa Savage took part in the UK edition of The X Factor and advanced to the final 24, but ended up being the 12th person to be evicted from the programme. It was after this that sheproceeded to the United States, affording her the opportunity to grow up and experience a multicultural setting.  Tiwa Savage, because of her love for music, furthered her education by enrolling at the Berklee College of Music, Boston, Massachusetts in the United States and graduated with a degree in professional music in 2007.

In 2009, Tiwa Savage signed a record deal with Sony/ATV Music Publishing. The deal gave her more exposure in the American music industry as it enabled her to write songs for top music talents such as Babyface, Kat Deluna, Fantasia Barrino, Monica and Mýa. By the time her contract with Sony/ATV Music Publishing came to an end, she proceeded to return back to her roots in Nigeria to further develop the fast rising music and entertainment industry in the country.

Once she moved back to Nigeria, the competition in the music industry was stiff as she had to prove herself in a male dominated industry. The Nigerian music scene had better opportunities for her to shine than what was obtained in the United States but because her initial entry into the local music scene was done without some infusion of the local pidgin and vernacular languages, she found it difficult to break through and massively flopped on her first stage performance in the process.

Irrespective of her initial struggles back home in Nigeria, she slowly but steadily warmed her way into the hearts of Nigerians and became a massive fan favourite with the passage of time. Tiwa made corrections and improvements to her lyrics, accent and began to her native language in her songs and this made many Nigerians love her even more. In due time, she established her own record label, 323 Entertainment, with her former manager and estranged husband Tunji “Tee Billz” Balogun.

In 2012, she joined Mavin Records when her record label teamed up with Don Jazzy’s brand. Her debut single, Kele Kele Love became an instant hit upon its released in 2013, topping most major music charts in Nigeria. She followed that up with the release of her long-awaited debut album, Once Upon A Time. Under Mavin Records, she released many songs with the Mavin crew, chief among them being Dorobucci which was well received by almost every Nigeria and received massive air play.

To date, Tiwa Savage has three music albums to her name and two extended plays (EPs) which are:

Some of her songs include the following:

Tiwa Savage has some collaborations as well. She featured in Reekado Banks single Turn It Up, which was produced by Don Jazzy. While she was still at Mavin Records, she collaborated with the Mavins All Stars in the hit single “Dorobucci,” which was released on May 1, 2014. The same year, Tiwa Savage worked with Mi Casa, Lola Rae, Sarkodie, Diamond Platnumz, and Davido on a song for DSTV’s Africa Rising campaign, aimed at inspiring Africans to participate in community-based social investment projects.

During the 2014 MTV music award, Tiwa performed alongside Miguel, Flavour, Davido, Mafikizolo, Uhuru, Oskido and Professor. She was also featured in Flavour’s song Oyi (Remix) which won the Channel O Music Video Awards as the Most Gifted R&B Music Video of the Year.

So far Tiwa Savage has won many awards in her successful music career to date. They include the following:

Tiwa Savage married to Tunji “Tee Billz” Balogun. They held their traditional marriage on 23 November 2013, at the Ark in Lekki while their church wedding was held on April 26, 2014 at the Armani Hotel in Dubai. The couple announced that they were expecting their first child on January 1, 2015, and six months later, Tiwa gave birth to their son Jamil Balogun.

On April 26, 2016, Tee Billz accused his wife, Tiwa of infidelity and his mother-in-law of witchcraft. In a 45-minute interview conducted by This Day newspaper and Pulse Nigeria, Tiwa Savage extensively addressed her husband’s lengthy social media posts regarding their marriage. She debunked her husband’s infidelity claims and accused him of financial recklessness, drug addiction and abandonment. She said her marriage to him was over. Though not formally divorced, Tiwa Savage has since separated from her estranged husband and has been alleged to be in a romantic relationship with Wizkid, something both music stars have refused to either accept or reject.

Tiwa Savage is one of the most influential music stars in Nigeria presently. Her net worth in US Dollars is estimated to be $15 million this 2023. While the bulk of her net worth comes from her album sales, her other sources of income that has increased her worth significantly over the years include her stage performances, and endorsement deals with top companies in Nigeria such as MTN, Pepsi, Forte Oil and Maggi.