The Asaba Massacre is a part of the Nigerian-Biafran Civil War which occurred in the town of Asaba, the present capital of Delta State, on October 7, 1967, in what was part of the defunct Mid-Western State at that time. 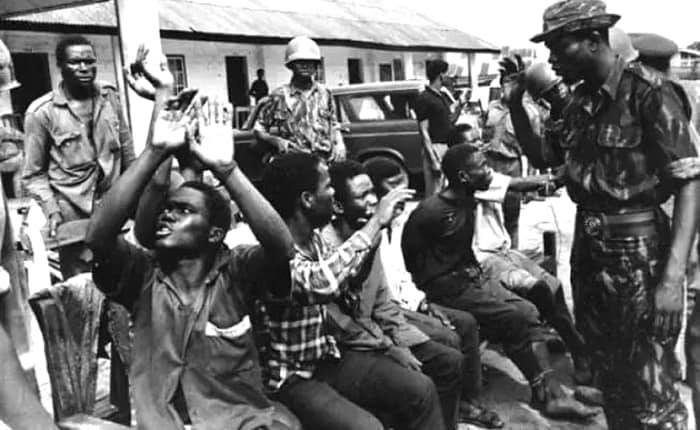 On August 9, 1967, the Mid-Western region was invaded through an offensive led by Colonel Victor Banjo, a commander in the Biafran Army. This was in an attempt to establish Biafran military presence there and repel the advancing Nigerian troops from getting closer to Biafra Land, with one eye on capturing Lagos, the Capital of Nigeria at that time. Colonel Banjo, in a surprise move, crossed the River Niger, via the Niger Bridge from Onitsha into Asaba town in Delta State. This battle between the Nigerian and Biafran troops lasted for five weeks and four days until it came to a conclusion at Ore, in present day Ondo State.

During the Nigerian Civil War, Biafran troops captured the Midwestern Region of Nigeria in early August of 1967, advancing westwards towards the Western region, and captured Benin City in the process, moving all the way to Ọrẹ. At Ore, the Biafran troops were repelled and pushed back by the Nigerian Army Second Division which was hastily established just for the purposes of this battle, under the command of Colonel Murtala Muhammed. The Federal troops, advancing eastwards, pushed back the Biafran troops advancing westwards, and because of their superior military might, largely due to the support of Britain and some other great powers, forced the Biafran army to retreat all the way back to the Niger, where they crossed the River Niger via the Niger bridge back into Onitsha.

Once the Biafran army reached Onitsha, they blew up the eastern spans of the Niger bridge, preventing the advancing troops of the Federal Military Government of Nigeria from pursuing them any further. This forced the Nigerian soldiers into Asaba and on getting there, the Federal soldiers thus transferred their aggression on the defenseless people of Asaba in one of the most awful show of brutality in the history of Nigeria. On October 5, 1967, the Federal troops under the command of Colonel Murtala Muhammed stormed Asaba in pursuit of Biafran soldiers who had earlier crossed Ore after taking Benin City and dislodging Nigerian troops there.

But because the Biafran soldiers had blown up the Niger bridge to prevent those on the Nigerian side of the Civil War from pursuing them any further, the Nigerian Federal troops then entered Asaba, and in a show of force, started going from house to house to kill people of the town who they accused of supporting the Biafran soldiers. They ransacked houses, killed defenceless civilians in the process, and labelled them Biafran sympathizers. The surprise advance and invasion of the Mid-West by the Biafran ‘liberation army’ necessitated the hasty formation of the Second Division of the Nigerian Army as earlier stated.

This Second Division would be responsible for the successful retake of Benin City from the Biafran army. At the time, the Second Division was commanded by Murtala Muhammed, a reason why it is generally assumed that Murtala ordered the killings. Though many ascribe the assumption to his belligerent and recalcitrant posture and role as the most senior Commander of the Division, there remains insufficient and non-subjective evidence to conclude so.

Coming back to the Asaba massacre, during the events that led to this tale of agony, sorrow and grief, many leaders of the town, on hearing about the brutal show of force by the Nigerian troops, summoned the townspeople to assemble on the morning of October 7, 1967, hoping to end the violence through a show of support for the much talked about “One Nigeria”. Hundreds of men, women, and children, many wearing the ceremonial akwa ocha (white cloth), paraded along the main street of the town, singing, dancing, and chanting “One Nigeria”.

At a junction, men and teenage boys were separated from women and young children, and gathered in an open square at Ogbe-Osawa village. Federal troops revealed machine guns, and orders were given, reportedly by Second-in-Command, Major Ibrahim Taiwo, to open fire and the men and young boys were sprayed with bullets. There are reports that at several other places in the town, these executions also took place, and by the time the Asaba Massacre was over, not less than 700-1000 people of Asaba were sent to their untimely death.

There were dead bodies everywhere. Most of them were later buried in shallow mass graves while the Nigerian troops still occupied the town afterwards, hunting down men and boys who escaped the October 7 massacre, raping and forcefully ‘marrying’ off women and young girls in the process. It is said that even 12 year old boys were not spared in the brutality, in addition to many more killed in the preceding days. Many extended families lost dozens of men and boys. Federal troops occupied Asaba for many months, during which time most of the town was destroyed and large numbers of citizens fled, many not returning until the war ended in 1970.

Ibrahim B. Haruna has sometimes been named as the officer who ordered the massacre, following a report of his testimony to the Nigerian Human Rights Violations Investigations Commission, known as the Oputa Panel (Vanguard, Oct. 10, 2001). This article quoted him as claiming responsibility (as the commanding officer) and having no apology for the atrocity. However, Haruna was not present in Asaba in 1967. He replaced Murtala Muhammed as C.O. of the Second Division in spring 1968. While there are no eye-witness reports of Muhammed ordering the killings, he was the Commander in the field, and many put the blame on him for overseeing this evil that will forever be known as the Asaba massacre.