This article is about the six (6) geopolitical zones in Nigeria and the various States that they make up. Our nation Nigeria is a Federal Republic that is made up of 36 States and its Federal Capital Territory which is situated at the centre in Abuja. All the States are grouped into six geopolitical zones namely: North West, North East, North Central, South West, South East and South.

Nigeria spans a total land area of 923,768 kmsq, sitting impressively in the West African subcontinent and having as its marked feature a large low plateau divided almost into two equal parts by major rivers, the Niger and Benue from the central region of the country where they meet to the Niger-Delta where they empty into the Atlantic Ocean. Our country shares her borders with the Republic of Benin in the west, Chad and Cameroon in the east, and Niger Republic in the north and its coast in the south lies on the Gulf of Guinea on the Atlantic Ocean.

Nigeria was divided into geopolitical zones by its former Head of State, General Sani Abacha in 1993 in order to carefully manage and allocate resources to every part of the country while demanding accountability from the zones with minimal stress.

Also, even if the nation is ethnically heterogeneous, there were found some similarities among the over 500 ethnic groups in the country and this formed a major reason to create manageable units in the form of geopolitical zones to classify similar ethnic groups together and allocate resources accordingly. 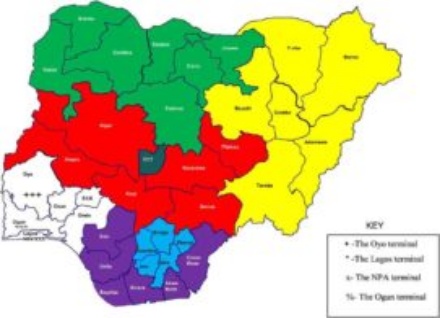 While each of the six geopolitical zones is made of people with some similar culture, it is important to note that the North Central is the most diverse of the zones. We shall be looking at the six (6) geopolitical zones, their states, ethnic groups, economic activities and other interesting details going forward.

The following is a comprehensive list of the six (6) geopolitical zones in Nigeria today and their various States:

The north-west geopolitical zone of Nigeria is one of the largest zones in the country with a landmass coverage of 216,065 kmsq making it cover 25.75 per cent of the total land area of Nigeria. It is also one of the most populous zones in the country. There are seven (7) States that make up this zone, and they are: Kano, Kaduna, Katsina, Kebbi, Jigawa, Sokoto and Zamfara States respectively. Major cities in the North-West include Kano, Zaria, Kaduna, Birnin Kebbi, Dutse, Sokoto and Gusau. The major ethnic groups in this geopolitical zone include the Hausa-Fulani, Kanuri, Gbagyi, Zuru, Jabba, Baju, Maguzawa, etc. The people here are mostly into agriculture and they are major producers of cash crops such as sorghum, maize, rice as well as other cereals and tomatoes.

The north-east geopolitical zone consists of six (6) States which are: Bauchi, Borno, Yobe, Adamawa, Taraba and Gombe. The most important economic activity in this zone is farming and animal husbandry. This zone together with north-west and north-central, are the major agricultural zones in the country and they provide most of the food that is consumed in Nigeria. The major cities in the north-west geopolitical zone of the country are: Potiskum, Yola, Bauchi, Maiduguri, Gombe and Jalingo and Damaturu. The major ethnic groups found in this zone include: the Kanuri, Mumuye, Fulfulde, Balewa, Tiv, Babur, Tangalawaja, to mention but a few.

The Yoruba dominated south-west geopolitical zone is located on the western upland otherwise known as the Yoruba Highland. It is made up of Lagos State, Ogun State, Osun State, Ondo State, Oyo and Ekiti States respectively. This is the zone with the highest number of academicians in the country. Major cities in this zone include the popular and fast growing Lagos, Ibadan, Osogbo, Abeokuta, Ado-Ekiti and Ogbomoso and Akure. The most important economic activity in the South-West zone is agriculture. There are two oil producing states in this region and they are Lagos state and Ondo state.

Just like the south-west, the south-east geopolitical zone is almost homogeneous with Igbo as the dominating ethnic group. States in this zone includes Abia, Anambra, Imo, Enugu and Ebonyi. Out of the five (5) States that make up the south-eastern region, only two can be said to be truly oil producing and they are Imo and Abia. The most important economic activity in the south-east is farming. A large number of its population also engage in trading. The Igbos are notable for producing the highest number of businessmen in the country.

The south-south is the 6th geopolitical zone in Nigeria and the largest oil producing region in the country. All the states in this region except Cross River are major oil producers. The six (6) States in the south-south geopolitical zone include: Akwa Ibom, Bayelsa, Delta, Cross River, Rivers and Edo. These States together with Abia, Imo and Ondo makes up the region known as the Niger-Delta region.