Ebelechukwu Agbapuonwu, popularly known as Salwa Eid Naser is a Nigerian-born Bahraini sprinter who represents Bahrain at international athletics competitions. She is a specialist at 400 metres races and is the current World Champion in the event, running a personal best time of 48.14 seconds, the third fastest time in history, to become the first African woman to emerge victorious at the World Championship event. 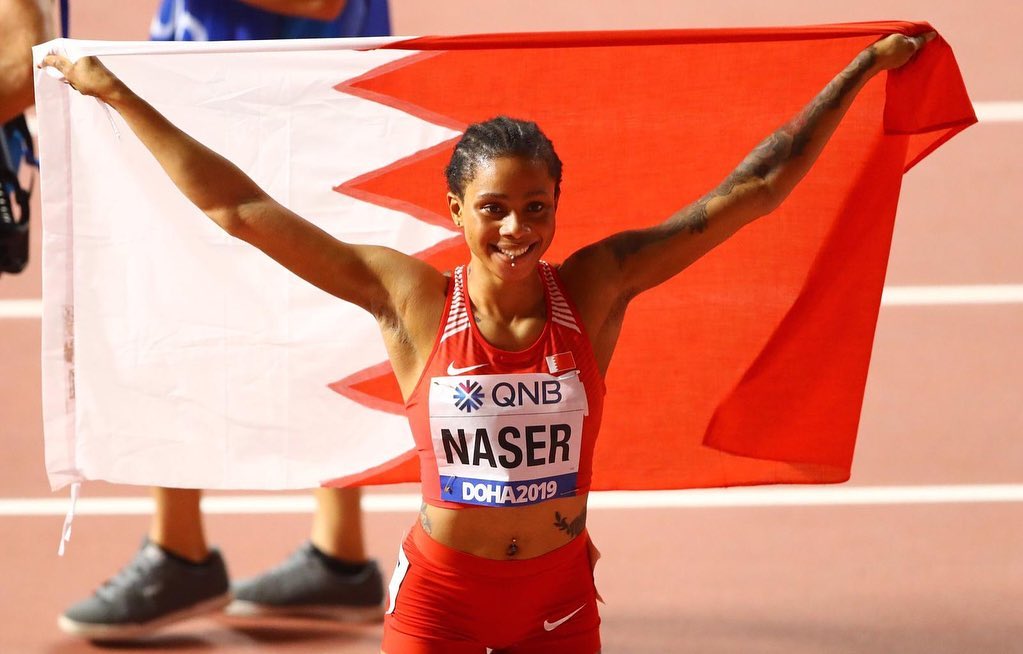 Salwa Eid Naser was born on May 23, 1998 in Onitsha, Anambra State, Nigeria to the Agbapuonwu family. She is of Igbo descent, Igbo being one of the most popular spoken languages in Nigeria. Her love for running started at a very young age and by the time she was 11 years old, and probably in secondary school, she began to focus on the 400 metres race.

In 2013, she emerged victorious as the Schools Champion in Port Harcourt, Nigeria and a year after this, at the age of 16, she switched allegiance to Bahrain, converted to Islam, and changed her name in the process. This she did because of how badly she was treated by the Athletics Federation of Nigeria when she wanted to represent the country as a sprinter at international athletics competitions.

In an interview about her switch of allegiance to Bahrain, she expressed happiness at the move and did not wish to dwell on her past experience with the Athletics Federation of Nigeria.

Her first athletics success came at the 2014 Arab Junior Athletics Championships which was held in Cairo, Egypt, where she took home the gold medal in the 200 metres and 400 metres categories respectively. This achievement made her consider athletics more seriously and it became evident that she was serious with her career in athletics when she set a new best of 54.50 seconds at the Asian Trials for the 2014 Summer Youth Olympics which was to be held in Nanjing, China.

Salwa Eid Naser continued to improve her best at the Summer Youth Olympics, clocking a time of 53.95 seconds in the first round before taking the silver medal with a much improved time of 52.74 seconds behind Jessica Thornton of Australia. After the competition, she began working with former Bulgarian athlete Yanko Bratanov, who also coached fellow Nigerian-Bahraini athletes Kemi Adekoya and Samuel Francis (both later banned for doping).

In early 2015, Salwa Eid Naser set national junior records of 11.70 seconds for the 100 metres and 23.03 seconds for the 200 metres while she was in Bulgaria, thus confirming her as Asia’s best runner in her age group with a gold medal at the 2015 Asian Youth Athletics Championships held in Doha, Qatar. She continued to prove herself among the best in the world at the 2015 World Youth Championships in Athletics held in Cali, Colombia. At the event, she defeated the competition’s favourite, Lynna Irby in the final stages of the race, setting up a lifetime best of 51.50 seconds to take home the gold medal.

She ran in a hijab at the final which came on the day after Ramadan, enabling her to eat normally before the race as she was fasting all through the qualifying rounds. The gold medal at the 2015 World Youth Championships in Athletics made her the second Bahraini woman to win a global-level title, after senior world champion Maryam Yusuf Jamal. Her tactical running was praised by decathlon world record holder Ashton Eaton, who invited her on an all expenses paid trip to train with him for three days.

Salwa Eid Naser’s first senior title came at the 2015 Military World Games held in Mungyeong, South Korea in October. She competed against 2012 Olympians Bianca Răzor and Nataliya Pyhyda, and won the 400 m title with a best of 51.39 seconds against her more experienced challengers, becoming the youngest ever winner of that title. In 2017, she won the silver medal at the IAAF World Championships which took place in London with a personal best time of 50.04 seconds, bested only by Phyllis Francis, after winning the heats and the semi-finals, each time improving her personal best.

She became the World Champion in Doha, Qatar in 2019, the youngest ever winner to do so in the 400 metres event, running the third fastest time ever which stands at 48.14 seconds, improving her personal best, set in 2018 when she won the 400 metres race at the IAAF Continental Cup held in Ostrava, Czech Republic, by 1.18 seconds. Salwa Eid Naser’s result of 48.14 seconds has been the fastest time since 1985, when Marita Koch set the world record and the second fastest at the World Championships, only behind Jarmila Kratochvílová who ran 47.99 in Helsinki, Finland, 35 years earlier.

According to Wikipedia, her medal records include the following:

Not much is known about her net worth but it is believed that she definitely has made it big in her athletics career and some of her endorsement deals. Currently, she is a top earner in the sport and this has a significant boost in how much she is worth.

She is currently single and is enjoying some of the best moments in her career. It is being reported by some sections of the media that she bleaches her skin, looking up some of her pictures on the internet should answer that for anyone who wants know. She also has tattoos and piercings on her body and she loves fashion.