This article is about the top 10 richest States in Nigeria this 2023. Our country is the richest country in Africa. The country has 36 states and a Federal Capital Territory. The wealth status of Nigeria is not distributed equally among these 36 states. While some have a GDP of more than $20 billion, others have a GDP of less than $5 billion. This post will discuss the list of top 10 richest states in Nigeria according to their GDP. The richest state in Nigeria this 2023 is Lagos State as we shall see in a short while. 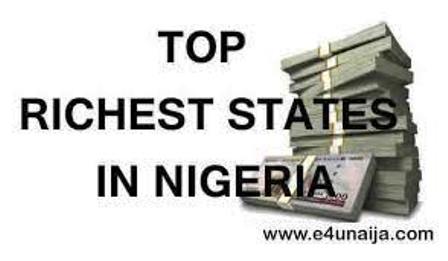 FULL LIST OF THE TOP 10 RICHEST STATES IN NIGERIA 2023

The following are the 10 richest States in Nigeria according to their GDP this 2023:

Akwa Ibom has steadily been on the rise for some time now and their economy is one of the best in Nigeria. The State is the second richest in the country with a total GDP of $13.27 billion. This State is the largest producer of oil in the country and the city of Uyo, one of the most beautiful cities is the capital of the state.

Rivers State is the third richest State in Nigeria this 2023, behind only Lagos and Akwa Ibom States, with a total GDP of $13.19 billion. It is located in the oil rich Niger-Delta region and home to two Nigerian oil refineries. The capital of the State, Port Harcourt is where these refineries are located. Rivers State is one of the most populated states in the country and apart from it being an oil producer, farming and fishing are also practiced in the State.

Delta state, just like Rivers State is located in the South-South Geopolitical zone of Nigeria. It is the fourth richest State in the country and is among the largest producers of crude oil in the country. Delta is home to Warri, a town where one of Nigeria’s oil refineries is located. The capital city of the State is Asaba. Apart from being an oil producer, Delta State is also a producer of agricultural crops in the country.

Bayelsa State is a South-South State located in the Niger-Delta region the country and it is the fifth richest state in the country with a total GDP of $8.14 billion. This State is the home of former President, Goodluck Ebele Jonathan and it was at Oloibiri in this State that crude oil was first discovered in commercial quantity ever in Nigeria. This 2023, Bayelsa topples the likes of Oyo and Imo States to make the list of top 10 richest States in the country.

With a total GDP of $7.95 billion, Anambra State is the richest state in the south-eastern part of the country this 2023. It unsits Imo State which has long held that title and this may be due to the effects of the coronavirus pandemic that has affected the revenues of many States in the federation. Its capital city is Awka. Anambra ranks sixth on the list of richest States in the country by GDP currently and while it is not a major oil producing State in the country, it has oil in commercial quantities. This State is home to majority of Nigeria’s top businessmen.

Ondo State is located in south-western part of Nigeria with Akure as its capital. The State is an oil producing State. It is the eighth richest State in Nigeria presently with a total GDP of $7.57 billion. Apart from oil, it is also blessed with other mineral resources as well as cash crops like cocoa etc.

Ogun State is the industrial base of Nigeria (Lagos is second). This State’s capital is Abeokuta and it is located in Southwestern Nigeria. Abeokuta is home to Olumo Rock, a major rock in Nigeria as well as a great tourist destination. With a total GDP of $7.25 billion, Ogun State is the ninth richest State in Nigeria currently.

Kaduna State is the second State from the northern region that made it to our list as it is the centre of learning in Nigeria and also one of the most diverse States in terms of ethnic group composition. It is also the home to the Nigerian Defence Academy, Nigerian College of Aviation Technology, Ahmadu Bello University, Nigerian Institute of Transport Technology, etc., and with a total GDP of $6.95 billion, it sits pretty as the tenth richest State in Nigeria currently.