The Nigerian Prisons Service, her ranks and salary structure this 2023 is the focus of this article. The Nigerian Correctional Service (NCoS), formerly known as the Nigerian Prisons Service (NPS) is the approved government paramilitary agency that is in charge of all the prisons in the country as well as prison affairs. This organization has its headquarters in Abuja, the Federal Capital Territory and it is under the Ministry of Interior. 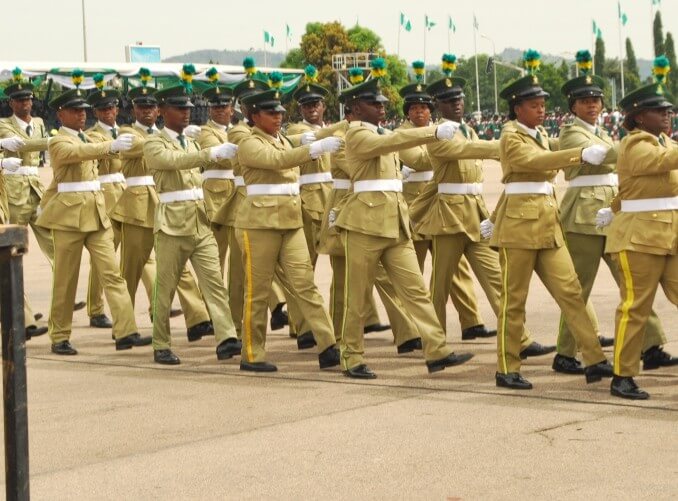 In Nigeria today, there are about 240 prisons located in several parts of the country. It is reported that the official capacity of these prisons is about 50,000 people but many of them are currently overpopulated by more than 75,000 people and are in really bad state. Most of these prisons need to be refurbished and the living conditions in majority of them need also be improved. Having stated that, it is noteworthy to mention that of the many people in prison in Nigeria today, most are males with an estimated number of more than 74,000 and the minority make up women, numbering close to 2000.

The Functions of The Nigerian Prisons Service (NPS) include:

TYPES OF PRISONS IN NIGERIA

This type of special prison is for offenders who are under the age of 18. They are regarded as juveniles or minors. Of the 75,000 prisoners in the country currently, 2 per cent of children account for young people who make up that number and they are in specialized correctional facilities to ensure that they turn out to be better citizens of the country when they grow older.

Juveniles or minors cannot be put in the same prison as adults so they are sent to juvenile correctional facilities situated in their home state or city. In certain cases however, certain juveniles have been locked up in adult prisons along with adult criminals and this reportedly happened in the northern part of the country.

There are only two female-only prisons in Nigeria where only adult women are sent to. One is the Kirikiri Prison located in Apapa, Lagos and the other is the Numan Old Prison, located in Adamawa State. Women who are 18 years or older can be sent to any one of these prisons for various crimes. They may spend months or several years in these prisons awaiting trial.

Security prisons are the main types of prisons we have in Nigeria and they are of three types namely:

Every minimum security prisons are meant for crimes such as fraud, theft and various crimes in the country regarded as non-violent. Medium security prisons were established for dangerous criminals who need to be punished for their crimes, for example armed groups etc. Examples of medium prisons are the Kuje Medium Prison, Abuja and the Kirikiri Medium Security Prison in Lagos.

Maximum security prisons in Nigeria were established for the most dangerous and violent people who have murdered people and engaged in so many violent crimes. The criminals are completely isolated from everyone. Examples of maximum security prisons are the Gashua Maximum Prison and the Kirikiri Maximum Security Prison.

People who are mentally unstable but have committed one crime or the other are kept in psychiatric prisons. These prisons ensure that they get medical help concerning their various psychiatric disorders and that they are rehabilitated as well.

Military prisons are special military detention facilities for people who are serving members of the Nigerian armed forces or those who have served in the military and committed military crimes as well as fundamental human rights violation. An example of a military prison is the Giwa Barracks Detention Facility in Maiduguri, the capital of Borno State.

The leadership structure of the Nigerian Prisons Service is basically divided into two, which are:

The person in charge of the Administrative Structure is the Controller-General of the Nigerian Correctional Service. He is the Chief Executive Officer of the agency and he oversees the day-to-day running of the organization. He is responsible for the formulations and implementation of penal policies in the country. The Comptroller-General of the Nigerian Prisons Service reports to the President and Commander-in-Chief of the Armed Forces of the Federal Republic of Nigeria through the Minister of Interior. He takes direct responsibility for policy implementation in the agency.

The Directorates under the supervision of the Comptrollers-General are specialized divisions tasked with coordinating specific areas of prison administration. These Directorates include:

THE COMMAND STRUCTURE OF THE NIGERIAN CORRECTIONAL (PRISONS) SERVICE

There are four levels of command in the Nigerian Prisons Service. The command structure at the top is the National Headquarters of the NPS located in Abuja and it is divided into eight (8) zones with each zone having State Commands under it. All eight zones are headed by Assistant Comptrollers-General of Prisons while the State Commands are headed by Comptrollers of Prisons. The prison is the last unit of the structure.

RANKS AND SALARY STRUCTURE OF THE NIGERIAN CORRECTIONAL (PRISONS) SERVICE 2023

The salary structure of the Nigerian Correctional Service (NCoS), which was formerly known as the Nigerian Prisons Service (NPS) is determined by the Consolidated Paramilitary Salary Structure, CONPASS. The CONPASS salary structure makes sure that paramilitary agencies and  organizations and their service members are given allowances and bonuses to add to their basic salaries

On the average, the yearly salary that a Nigerian Correctional (Prisons) Service worker is paid this 2023, ranges between ₦800,000 – ₦1 million per year, and the estimated monthly salary stands at ₦50,000. These salaries for prison workers in Nigeria are paid based on their ranks and educational qualifications.

THE SUPERINTENDENT OF PRISON (SP)

The salary of the superintendent of prison is structured in accordance with CONMESS 02. CONMESS is the consolidated salary structure for medical workers. The required academic qualification of applicants for this rank are BSc, MBBS/MD/ MDS (Medical). Equivalent degrees received in officially recognized universities are also accepted.

THE DEPUTY SUPERINTENDENT OF PRISON (DSP)

The salary of the deputy superintendent of prison is structured in accordance with CONHESS 09. CONHESS is the consolidated salary structure for health workers. The academic qualification for this rank must be obtained from an officially recognized university

THE ASSISTANT SUPERINTENDENT I (ASP I)

The salary of the assistant superintendent of prisons I is structured in accordance with CONPASS 09. The required academic qualification of applicants for this rank is BSc. or Master’s degree in Humanities, Architecture, Engineering, Radiology, etc The degree must be obtained in an officially recognized university.

The salary of the assistant superintendent of prisons II is structured in accordance with CONPASS 08. The required academic qualification of applicants to this rank is the first degree in Humanities or Psychology; Public Health or Social Sciences; or Social Works, etc. The degree must be obtained in an officially recognized university.

The salary of the senior inspector is structured in accordance with CONPASS 08. The required academic qualification of the applicant for this rank is HND in Humanities, Psychology, Public Health or Social Science/Social Works, etc. The certificate must be obtained from officially recognized colleges or polytechnics.

The salary of the inspector of prison is structured in accordance with CONHESS 06. The required academic qualification for this rank are degrees in Nursing. Registered Midwives or Registered Nurses or both can apply for this position. The qualification must be obtained from an officially recognized educational institution.

The salary of the assistant inspector of prison is structured in accordance with CONPASS 06. The academic qualification for this rank is OND/NCE (General Duty) received at an officially recognized educational institution.

PRISON ASSISTANT I (PA I)

The salary of the prison assistant II is structured in accordance with CONPASS 04. The academic qualification for this rank are the GCE (ordinary), SSCE or its equivalent, NECO or its equivalent, no fewer than 5 credits in maximum of 2 sittings. There must be credits in English or Trade Test (grade 2). This includes Mechanics, Plumbers, Masons, Auto Electricians, Carpenters etc.

The salary structure of the prison assistant II is structured in accordance with CONPASS 03. The requirements to applicants are the GCE (ordinary), SSCE or its equivalent, NECO or its equivalent, no fewer than 3 credits in maximum 2 sittings. There must be credits in English or Mathematics. Alternatively, the Trade Test (grade 3). This includes Mechanics, Plumbers, Masons, Auto Electricians, Carpenters, etc.

Whenever you hear anything about the Nigerian Correctional Service, bear in mind that it is not a new organization but the former Prisons Service in the country. This name change is effective and fully functional, and it was brought about in order to conform with the dynamism and standards of other Correctional Services the world over.