In this post, Nigerian Guide will discuss about the various Naval Command Bases in Nigeria, which are also known as the Nigerian Navy Command Centres. 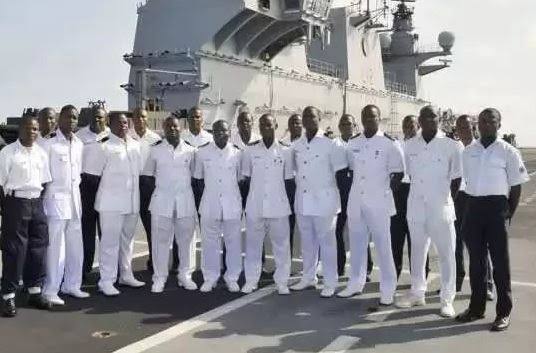 Every one of these naval military bases in the country take orders from their principal officer who is the Chief of Naval Staff (CNS) and as we proceed, we shall discuss about the various navy command centres in details and their locations in the country.

This is the full list of the naval command bases in Nigeria. These naval command centres are integral to the various functions of the Nigerian Navy. The command structure of the Nigerian Navy (NN) comprises of 9 branches at the Naval headquarters and 5 commands of which 3 are operational military commands and 2 are training and logistics commands. These are the main command bases through which the Nigerian Navy operates and without them, it will not be out of place to say that there will not be any Naval presence and activity in the country.

All the command bases listed in this article are directly under the Nigerian Navy Headquarters, through which full command of the NN is exercised. We will now look at every single naval command centre in the country in detail.

At its helm is the Chief of the Naval Staff (CNS) who is the principal military officer of the Navy in Nigeria. The CNS exercises full military command of the Nigerian Navy and he reports directly to the Chief of Defence Staff, who reports to the Minister of Defence and the Defence Minister ultimately reports to the President, who is the Commander-In-Chief of the Armed Forces of Nigeria. The Chief of Naval Staff has 7 staff branches in addition to the Office of the Navy Secretary. The staff branches include: Policy and Plans, Training and Operations, Administration, Naval Engineering, Logistics, Accounts and Budget, and Safety and Standards. All these branches are headed by Principal Staff Officers of the rank of Rear Admiral.

The Naval Headquarters (NHQ) directly heads 3 operational commands in the country as earlier stated and they are: the Western Naval Command, the Eastern Naval Command, and the Central Naval Command. Other command bases headed by the Nigerian Navy headquarters are: one training command, one logistics command and multiple autonomous units in the country. These several autonomous units of the Nigerian Navy are: Naval Ordnance Depot (NOD), Naval Doctrine and Assessment Centre (NDAC) and Navy Holdings Limited (NHL). The autonomous units and support facilities enable the NN to maintain the fleet and personnel for sustained operations.

The headquarters of the Western Naval Command is located at Apapa in Lagos State. It spans the sea and coastal areas from the Nigeria/Benin border at Longitude 002 degrees 49’ East to Longitude 006 degrees East in Delta State, from the Nigerian coastline to the limit of the country’s exclusive economic zone.

The units under the jurisdiction of the Western Naval Command of the NN in the country include:

The Eastern Naval Command is the second operations command of the Nigerian Navy with its headquarters situated in Calabar, the capital territory of Cross River State. The ENC spans the entire sea area from Longitude 006 degrees East in Delta State to the Nigeria/Cameroon border at Longitude 008 degrees 30’ East, and from the Nigerian coastline to the limit of the country’s exclusive economic zone.

The Command has the following units under its jurisdiction:

The Central Naval Command (CNC) is the third operations command of the NN, established in February 2012 with its headquarters at Brass, Bayelsa State. Being a new command without any offices or structures on ground in Brass, a command’s temporary headquarters commenced operations as a HQ (Annex) CNC at Yenagoa in March 2012 with the first wave of officers and ratings. The Command’s Area of Responsibility (AOR) extends from the area before River Benin entrance at Longitude 005 00′ East to River Santa Barbara entrance at Longitude 006 30′ East covering a coastal distance of about 156nm.

The coastal states covered by the Command are Bayelsa and Delta states, while the inland states in the Area Of Responsibility include Edo, Kogi and Anambra States. Based on the CNC established AOR, all the existing naval bases and establishments located in the states within the AOR became part of the Central Naval Command.

The benefits of establishing the CNC include but not limited to the following:

The Command has the following units under its jurisdiction:

Others are the Command Academic Training Officer (CATO), CABO, CAO, CINTO and CPM.

The units under NAVTRAC are:

The Logistics Command is headed by a Flag Officer Commanding of the rank of a Rear Admiral and its headquarters is located in Oghara, Delta State. The FOC is directly responsible to the Chief of the Naval Staff on the implementation of logistics policies. The Command has 4 Depots located in Lagos, Port Harcourt, Sapele and Calabar. The Depots handle material and POL supply to the Fleet and Bases.

There are 3 Fleet Support Groups (FSGs) namely; FSG (West), FSG (East) and FSG Central in Lagos, Calabar and Warri respectively. There is also a Motor Vehicle Maintenance Group and a Helicopter Support Group (HSG) both located in Lagos. Additionally, plans are on the way to establish a Work Services Groups (WSG) and an Underway Replenishment Group (URG) in the future.

The autonomous units are those units which require prudent management and high-level control that need not be duplicated or represented at the lower hierarchy. These units help to maintain the fleet and personnel of the Nigerian Navy and it reports directly to the Chief of Naval Staff. The autonomous units consist of Naval Ordinance Depot (NOD), Naval Doctrine and Assessment Centre (NDAC) and Navy Holdings Limited (NHL) and there are 9 subsidiaries of the NHL which includes: