This post is about at the NSCDC ranks and salary structure in Nigeria this 2023. The Nigerian Security and Civil Defence Corps (NSCDC) is one of the top paramilitary agencies in Nigeria and their ranks and salary scale is always a hot topic of discussion especially among potential officers of the agency. We shall also be looking at the history and functions of the Nigerian Security and Civil Defence Corps (NSCDC). If you have been looking for information on this security agency, then this article is just what you need. Be informed that the NSCDC is also one of the top security agencies in Nigeria. 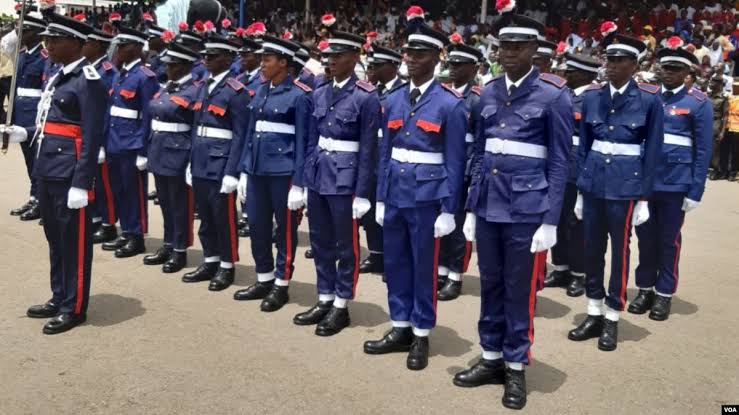 NSCDC: OVERVIEW OF THE AGENCY

The Nigeria Security and Civil Defence Corps (NSCDC) is a paramilitary Federal Government security agency in Nigeria and its history can be traced to May 1967 when it was officially established by the Federal Government of Nigeria, with the act of the National Assembly. The act establishing the Civil Defence in Nigeria was amended in 2007, to enhance the statutory duties of the corp. The Civil Defence Corps, formally known as the Nigeria Security and Civil Defence Corps, is a top a government security agency of the Federal Republic of Nigeria that is commissioned to provide measures against threat and any form of attack or disaster against the country and her citizens. This paramilitary security outfit is statutorily empowered by lay Act No. 2 of 2003 and amended by Act 6 of 4 June 2007.

The NSCDC is empowered to institute legal proceedings by or in then and of the Attorney General of the Federation in accordance with the provisions of the constitution of the Federal Republic of Nigeria against any person or group of persons that are suspected to have committed an offence, maintain an armed squad in order to bear fire arms among others to strengthen the corps in the discharge of its statutory duties. The Nigerian Civil Defence Corps was first introduced in May 1967 during the Nigerian Civil War in Lagos, the then Federal Capital Territory of the Country in order to sensitize and protect the lives and property of every civilian in the capital. As at the time it was formed, it was known as the Lagos Civil Defence Committee.

The Lagos Civil Defence Committee later evolved into what is known as the NSCDC today in 1970. On establishment, the Civil Defence Corps was mandated to carry out some educational and enlightenment campaigns in and around the Lagos Capital Territory in order to sensitise members of the civil populace on enemy attacks and how to protect themselves from danger as most Nigerians living in and around Lagos territory at that time had little or no knowledge about war and its implications. The security outfit deemed it very necessary to educate the masses through electronic and print media on how to guide themselves during air raids, bomb attacks, identify bombs and how to dive into trenches during bomb blast.

In 1984, the Corps was transformed into a National security outfit and in 1988, there was a major restructuring of the Corps that led to the establishment of Commands throughout the country, including Abuja, and the addition of special functions by the Federal Government. On June 28, 2003, an Act to give statutory backing to the Nigeria Security and Civil Defence Corps passed by the National Assembly was signed into law by Chief Olusegun Obasanjo, GCFR, the former President and Commander-in-Chief in of the Armed Forces, Federal Republic of Nigeria.

FUNCTIONS OF THE NIGERIA SECURITY AND CIVIL DEFENCE CORPS (NSCDC)

RANKS IN THE NIGERIA SECURITY AND CIVIL DEFENCE CORPS (NSCDC)

As aforementioned, ranks n the NSCDC are attained via promotion or upon obtaining an additional qualification. Each rank reports directly to the one superior to it and the Commandant-General of the Nigerian Civil Defence Corps is reports to the President and Commander-in-Chief of the Armed Forces of the Federal Republic of Nigeria, who is his appointer.

The salary structure of the Nigerian Civil Defence Corps (NSCDC) is based on the levels and ranks of the officers. The salary scale is set by the Consolidated Paramilitary Salary Structure (CONPASS).

The following are the various ranks and the corresponding salaries of the officers of the NSCDC in Nigeria this 2023: