Nancy Isime is a beautiful Nigerian model, actress, TV presenter, celebrity and media personality. She ventured into modelling very early in life and that led her to pageantry where she won the Miss Valentine International beauty pageant in 2009. In 2011, she began her acting career when she featured in the TV series Echoes.

Since her debut in acting, Nancy Isime has since appeared in several films and is known for presenting gossip show “The Squeeze” and technology show “What’s Hot”. In 2016 she replaced Toke Makinwa as the presenter of the popular show Trending on HipTV. 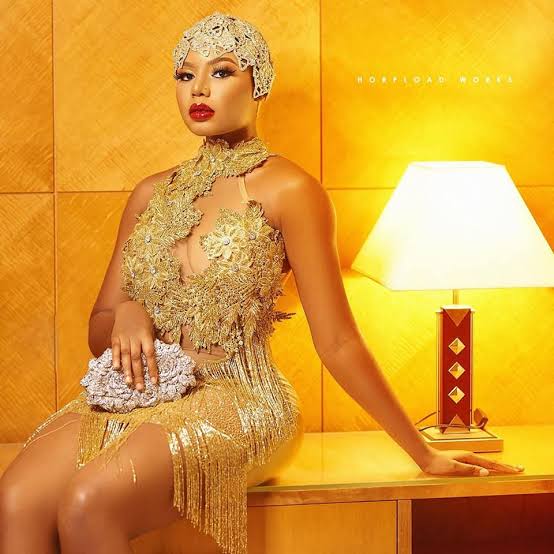 Nancy Isime was born on December 17, 1991 in Edo State, South-South Nigeria but was brought up in Lagos State, the richest state in Nigeria currently and the nation’s commercial capital. She is from the Esan tribe in Edo State and is a famous Nigerian celebrity.

Nancy Isime had her primary and junior secondary education in Lagos State before going back to Benin City, the Edo State capital to complete her senior secondary school education. Upon her successful completion of primary and secondary school education respectively, she proceeded to the University of Port Harcourt for her basic Course and later attended the University of Lagos where she earned a Diploma in Social Work after studying for two years.

During her active years in modelling, Nancy Isime was highly sort after. In 2009, she emerged victorious in the Miss Valentine International beauty pageant and followed that up with a second place finish in the Miss Telecoms Nigeria beauty pageant. During her active modelling career, Nancy Isime worked for the likes of House of Marie, Ade Bakere, Adebayo Jones, Zizi Cardow, Shakara Couture, Konga Online, to mention but a few.

Nancy Isime as widely reported in sections of the media, talked about her modelling career thus:

She ventured into acting at some point in her life and made her acting debut in the TV series “Echoes” in 2011. She appeared in several films in 2014 and has not looked back ever since; appearing is so many movies till date that keeps you glued to your screens and have you sitting at the edge of your seats.

Isime is a top Instagram celebrity as well, sharing captivating pictures of herself about fashion, work and her workout routines. One striking feature about her apart from her beauty is that she loves to rock low cut hairstyles, this has been her “trademark” for a number of years now.

Nancy Isime is also a television presenter, popularly known for presenting gossip show “The Squeeze”, technology show “What’s Hot” and backstage segments of MTN Project Fame season 7. In 2016 she replaced Toke Makinwa as the presenter of the popular show “Trending on HipTV” and she is still working as a TV presenter at the popular entertainment channel Hip TV. In October 2019, she co-hosted 13th edition of The Headies award with Reminisce. The award ceremonies was held at the Eko Convention Centre, Victoria Island, Lagos.

In 2016, Nancy Isime was voted City People Entertainment Award VJ of the Year and in 2019, she won City People Movie Awards as Best Supporting Actress (English).

The details of her awards and recognition are as follows:

Currently, Nancy is single and there has been no known person around her as her boyfriend or partner. She may be in a relationship but chooses to keep things private. Not much information is known about her relationship status, whether she has been in and out of relationships or has been previously engaged or not. What is known in many sections of the media is that she is not married.

Also, information about Nancy Isime’s family life is scarce on the internet. The names of her parents and her siblings, if she has any, are also unknown. What we know is that she is a happy, free spirited and delectable actress and TV presenter, doing what she loves most and living her life to the fullest in the process.

Presently, in this 2023, Nancy Isime is worth $2 million. Her source of wealth coming from her acting jobs as well as her role as a presenter at Hip TV and the host of The Nancy Isime Show. She also makes money from hosting top celebrity events and shows in the country.

The following are some of the movies that Nancy Isime has acted in. They include: