This article is about the top 10 most popular music record labels in Nigeria currently in this year 2023. You may have been wondering which music labels in Nigeria are currently ranked as the biggest and best, not to worry about that as we have set out to answer your questions in this post, so what we’d like you to do is to sit back, relax and read through this information that has been comprehensively written just for you. 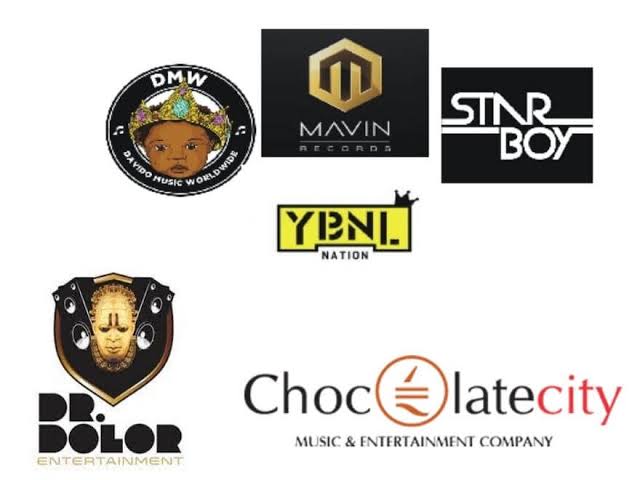 Record labels in Nigeria have made significant development in recent years, as evidenced by the growing number of up-and-coming artists thorough-bred by these music companies to the delight of all their fans. These up-and-coming musicians are making waves in the Nigerian music industry, which benefits the various record labels to which they belong. Take, for example, Joeboy, Fireboy DML, Rema, to mention but a few; you will definitely agree with us that these guys are doing a good job for their various music record labels.

The following are the 10 best, biggest and most popular music record labels in Nigeria this 2023:

DMW Records is undoubtedly one of Nigeria’s biggest record labels currently if not the best, owing to the huge success that several members of the label have had in recent years. DMW, which stands for Davido Music Worldwide is owned and chaired by David Adeleke, most popularly known by his stage name, Davido, a Nigerian ace vocalist. Members of this high ranking Nigerian music record label include a number of prominent and well-known artists.

Second on our list of the richest, largest, most popular, and most successful record labels in Nigeria today is Mavin Records. This Nigerian music company is a leading record label founded and funded by Don Jazzy, a Nigerian A-list music artist and legendary record producer. Mavin Records was established on May 8, 2012. Korede Bello, Dr SID, D’Prince, Di’Ja, Johnny Drille, Ladipoe, DNA Twins, Rema, and Crayon are among the numerous notable artists in the Nigerian music industry today. Tiwa Savage was a part of this label until she left.

Starboy Entertainment is a record label in Nigeria that currently ranks as one of the country’s largest and most successful. It was founded in 2013 by Nigerian pop singer Ayo Balogun, better known by his stage name, Wizkid. As soon as he left Banky W’s Empire Mate Entertainment, he started this label. He has so far groomed a large number of artists from his label.

When it comes to popularity and labels with the most successful artists in the music industry in Nigeria today, YBNL Nation Music Record, fully known as Yahoo Boy No Laptop, is at the top of the list. Because of how they have helped a lot of underprivileged singers from the streets and turned them into stars, YBNL Nation Records is frequently referred to as “common men” or “street record label”. Olamide Badoo, a Nigerian music singer, owns and manages the record label.

Dr. Dolo Entertainment is also one of Nigeria’s richest, largest, most popular, and most successful music record labels today, with Teni Apata, widely known as Teni Makanaki, being one of the record label’s most notable members. Osadolor Nate Asemota, better known as Dr. Dolor, is the founder of Dr. Dolor Entertainment.

Penthauze Music is led by popular artist Chibuzor Azubuike, better known as Phyno, who has won multiple awards, released four studio albums, and signed endorsement deals with Life Lager beer, Monster, and Tom Tom. Penthauze featured Runtown, Shugaboi, and Flipside on its 2011 lineup. Storm Rex was signed to the label in 2014, and she became the label’s only female talent.

With the song “Camera Out”, the label as a whole made its debut (2011). Runtown, on the other hand, dropped out of the label in 2013. Phyno’s debut album, “No Guts No Glory”, was released under the label. PentHauze released 2019 singles “the Bag” and “Agu” after signing Nuno, Rhatti, and Cheque. PentHauze currently ranks as one of the most popular music labels in Nigeria today.

DM Records, owned by Nigerian music legend Timaya, is one of the best and most successful music record labels in the country currently.

Ubi Franklin launched Made Men Music Group in 2010. He worked as Julius Agwu’s assistant before launching Made Men Music Group. Also before becoming a show promoter, he worked with AY Makun and other artists. Franklin would then manage Iyanya, who would go on to become the first recording artist for Made Men Music Group before leaving to join to Mavin Records in 2010. Tekno, Emma Nyra, and Selebobo joined the label in 2014, and it has since grown to become one of the biggest, best and most popular music labels in Nigeria today.