This article is about the biography and net worth of Mercy Eke this 2023. Mercy Eke is a Nigerian celebrity, media personality, video vixen, enterpreneur and actress who hails from Imo State, one of the Niger-Delta States in the south-eastern geopolitical zone in Nigeria. She is famous for winning the Season 4 of Big Brother Naija (BBNaija), a reality TV show in October 2019, in the process, becoming the first woman ever in the history of the programme to win the show’s ultimate prize. Her fans also refer to her as Mercy Lambo due to her love for Lamborghini and she is also known as the Queen of Highlights. 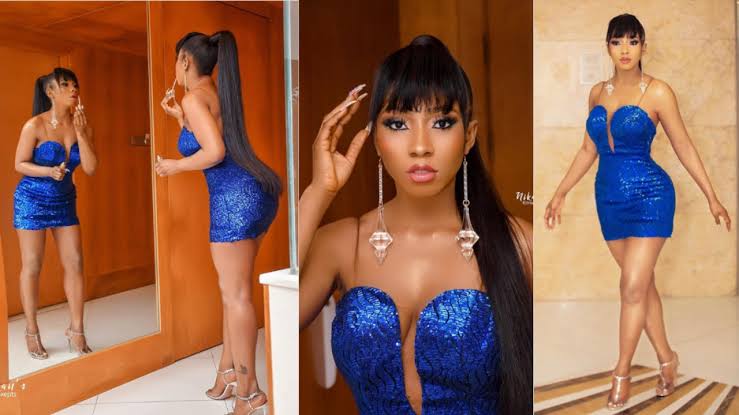 Mercy Eke was born on September 29, 1993 in Imo State. While growing up, she attended the Egbu Girls Secondary School in Owerri and after completing her secondary education, she proceeded to the Imo State University, where she graduated with a Bachelor’s degree in Business Administration in 2014. As a video vixen, Mercy Lambo appeared in the music video for Davido and Ichaba’s single “Baby Mama”.

Mercy Lambo also appeared in the music video for Airboy’s “Nawo Nawo”. She has also worked with Rudeboy. Mercy Eke before attaining wide media recognition for winning BBNaija auditioned to be part of the contestants of the programme four times prior to no avail. She finally got her breakthrough and the rest they say is history, winning the Pepper Dem Season and becoming the first woman to do so.

During her three-month stay in the Big Brother Naija house, Mercy Lambo faced stiff competition from some of her fellow housemates, chiefly Tacha, Seyi, Omashola and Frodd but saw off that competition in style by being declared winner of the reality TV show and going home with the prize money of a staggering ₦60 million effectively cementing her status as a celebrity in Nigeria and beyond.

She was awarded a cheque of ₦30 million and also went home with other incentives worth another ₦30 million such as a classy SUV from Innoson Vehicle Manufacturing Company Limited, an all expense paid trip for two to Dubai sponsored by TravelBeta, a home make-over by Scanfrost, a one-year supply of Pepsi and One Africa Fest VVIP experience, one-year supply of Munch it and Indomie noodles, and an Oppo smartphone.

On 30 June 2019, Mercy Eke began her journey into reality TV stardom by entering the BBNaija house. During the three-month period, she commanded a wide audience following that eventually had a major influence on her becoming the winner of the reality TV show. While in the house, public opinion were split between her and her main female rival Tacha about their different personalities and views about life and other things that generally affected the BBNaija show.

This female rivalry continued to heat up to the point that led to an altercation between her and Tacha, which eventually led to the disqualification of Tacha from the BBNaija house, giving her a massive boost in her quest to be declared winner of the show.

In October 2019, Mercy Eke won the BBNaija reality show, polling highest in the number of online votes cast by the millions of viewers in Nigeria. Mercy, with 41.77%, defeated her closest challengers Mike 19.94%, Frodd 16.46%, Omashola 11.58%, and Seyi 10.25% to emerge victorious. After being crowned winner of BBNaija Season 4 (Pepper Dem Season), Mercy Lambo became a brand ambassador and influencer for many companies and organizations.

In 2020, Mercy Eke commenced her journey as an actress into the Nigerian movie industry popularly known as Nollywood with a role in the movie titled Fate of Alakada. She has also appeared in short skits comedy videos alongside some Nigerian comedians. Mercy Eke the Queen of Highlights received the Africa Magic Viewers’ Choice Award for Best Dressed Female in her eye catching dress that got jaws dropping and tongues talking on March 14, 2020.

Mercy Eke is a brand ambassador for Royal Hair International Limited. She signed an endorsement deal with Mr Taxi, an e-hailing motorbike taxi company to be their brand ambassador on October 31, 2019.

Mercy Lambo signed a contract with the waist-trainer and protein shake company Mapia Tea. She also signed a deal with Royal Electronics. On 29 November 2019. Mercy has a partnership deal with the vodka brand Ciroc and she is the brand ambassador for Just Furniture, a furniture store based in Ikeja, the capital of Lagos State, Nigeria.

In 2019, Mercy became a brand ambassador for the sanitary brand Craft Methods and in 2020, she signed an endorsement deal with Unique Motors, a Nigerian Motor Vehicle Company in Nigeria to become their brand ambassador.

Mercy Eke is a popular celebrity in Nigeria as well as one of the most beautiful in the entertainment industry. This has made her to be a widely followed personality on social media particularly on Instagram.

If you love Mercy Lambo, the Queen of Highlights and you want to follow her on social media, these are her various social media handles.

Mercy Eke was in a relationship with fellow former BBNaija housemate Ike. The relationship started right from their time as housemates in the BBNaija TV reality show of 2019 (Pepper Dem Season), and it became really strong with the passage of time.

With all the public attention focused on their love story, they decided run a TV reality show titled “Mercy and Ike” on DSTV to let Nigerians in on the happenings in their private life and this served as a confirmation of their relationship. In 2020 however, the couple broke up as a result of certain irreconcilable differences.

Mercy Eke, also known as Mercy Lambo is worth about $4 million this 2023. Her primary source of wealth coming from her her major investments and various endorsement deals as well as her social media handles, Instagram most especially. She is one of the the most successful and most relevant BBNaija winners ever, and has a massive following in Nigeria, Ghana and some other African countries. Mercy is very hardworking and enterprising, and it is little wonder that her net worth is what it is today.

Mercy Eke is the proud owner of a 4-bedroom mansion in Lekki which reportedly cost ₦30 million. Upon buying the property, she shared the news with her many followers on Instagram. She has an impressive collection of cars in her fleet.