In this article, we shall be looking at the meaning of Nigerian Coat of Arms as well as other relevant information that you need to know. The Coat of Arms of Nigeria is a well-known image that embodies the pride of the country. Every nation has its own coat of arms, which is typically a heraldic pattern that denotes a particular person, family, state, or other entity. Despite the fact that how these symbols are presented varies from one entity or country to the other around the world, those who place great significance on them understand their deep meanings. 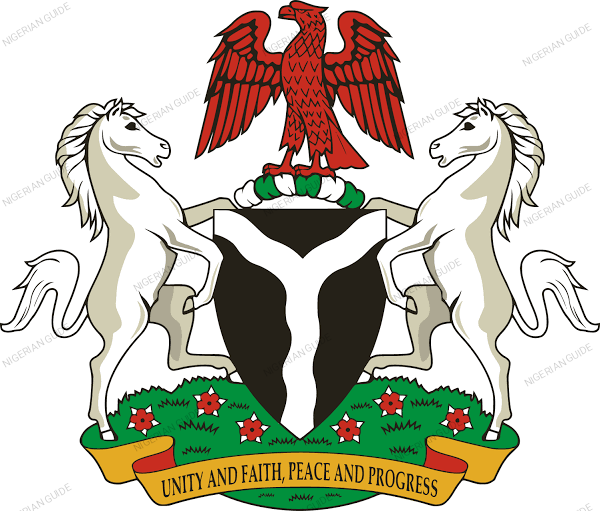 One of the emblems that stands for national unity, political authority, and state power is the Nigerian Coat of Arms. It is our national emblem, and every Nigerian and caring person around the world understands its great significance. To the very existence of our country and to each and every person who identifies as a Nigerian patriot, our coat of arms is a symbol that is extremely significant.

In 1975, the Federal Government legally accepted the Nigerian coat of arms. Each of the country’s governmental subdivisions had its own coat of arms before it was adopted. This is due to the nation’s then-current federal system of government, which let constituent states to have their own flag, coat of arms, and anthem. However, they were prohibited from creating their own currencies or armies.

Unity, and faith, peace and progress are represented by the Nigerian Coat of Arms. Nigeria was created by the amalgamation of several ethnic group and tribes. Nigeria required a distinctive symbol to represent its diversity while preserving its unity as it prepared for independence; as a result, we have a singular national emblem that represents this.

Although the designer of the Nigerian Coat of Arms is unknown, it is widely believed that it was developed at the same time as the rest of the country’s national symbols. For example, the current national anthem, Arise O Compatriots, was composed by the Nigerian Police Band under the direction of Benedict P. Odiase, and the lyrics were written by five people, including P. O. Aderibigbe, John A. Ilechukwu, Dr. Sota Omoigui, Eme tim Akpan, and B.A. Ogun. The national flag was designed by Michael Taiwo Akinkunmi.

One of the most potent representations of Nigerian authority is the nation’s Coat of Arms. These symbols are used as stamps to a seal by those in positions of authority, such as the President, Vice President, President of the Senate and the Honourable Speaker of the House of Representatives, albeit with minor colour differences.

Heraldry, a system that scholars say dates back to the 11th century, governs the design and use of coats of arms. A shield, crest, helmet, and two attendants are just a few of the images found on a coat of arms. Additionally, it includes the motto, which is typically found at the base of the sign. The Nigerian Coat of Arms is a distinctive heraldic composition made up of seven characteristics, each of which represents a virtue that the nation possesses. Here is a detailed explanation of the elements that make up Nigeria’s Coat of Arms.

The red eagle which perches on the black shield in the Nigerian Coat of Arms represents the strength of the nation.

The dark shield in the Nigerian Coat of Arms symbolizes the nation’s rich soil. The country has fertile soil that can support a plethora of cash crops, from which the people living in this part of the world have benefited since the dawn of time.

A Y-shaped wavy white pall that can be clearly seen in between the dark shield on the Coat of Arms of Nigeria symbolises the the meeting of the Niger and Benue Rivers at Lokoja, the Confluence town and capital city of Kogi State.

Standing at the left and right side of the Black shield is two horses. They both represent Dignity, which is a fundamental principle in any nation.

You can see flowers if you look at the base or bottom of the Nigerian Coat of Arms. These flowers, called Costus spectabilis, were included to the Coat of Arms since they may be found all around the nation. They represent the beauty of the country.

The red eagle is perched on the wreath that is directly above the dark shield of Nigeria’s Coat of Arms. The twisting green and white ribbon that can be observed on our Coat of Arms is known as The Wreath and it symbolizes the agricultural potentials of the country.

The baseband is a ribbon bearing the nation’s motto which is, “Unity and Faith, Peace and Progress”.