As we list all types of vegetation in Nigeria and the zones where they can be found, you will understand better why certain crops thrive in certain environments and perform poorly in others. You will also understand why certain foods and animal species are peculiar to certain places and regions in the country. These vegetation zones in Nigeria also have major influences on the type of weather and climate conditions of certain geographical locations, and this in turn determines the type of people inhabiting their locations in the long run and adapting fully to the demands of their environment. 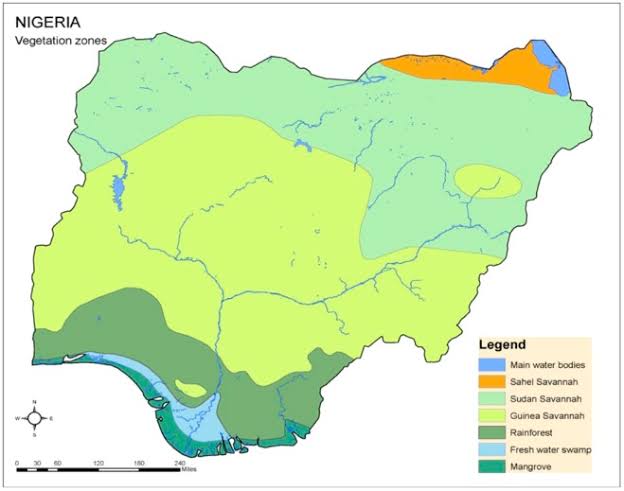 In Nigeria today, there are different types of vegetation that nature has bestowed on the country. All these help to regulate the flow of numerous biogeochemical cycles, most especially those of water, carbon, and nitrogen. Vegetation in the country is also very helpful in maintaining energy balances. Vegetation deals with the plant species, also known as the flora which are resident in a particular geographical area or habitat. Their presence as we have stated earlier, determines to a large extent the climatic conditions of an environment over a long period of time.

In summary, vegetation belts in Nigeria, as with those of other countries, highlight the inter-relationship between climate and plants. As we move from east to west, north and south of the entire country, we can see that all the geopolitical zones in Nigeria are characterized by a transition from one vegetation belt to another. Every one of these vegetation zones are important for the smooth operation of the ecosystem. Having said all that, we shall now take a look at all types of vegetation that we have in Nigeria.

LIST OF MAJOR VEGETATION TYPES IN NIGERIA AND THEIR LOCATIONS

Below are the major vegetation types in Nigeria and the zones where they can be found:

Nigeria is blessed with an abundance of tropical rainforests. These rainforests where very tall trees are densely populated and it rains either all year long or during the wet or rainy season. Tropical rainforests in Nigeria are very wet places, and they receive more than 2000mm of rainfall every year.

Their temperatures are usually between 20 degrees Celsius and 35 degrees Celsius. Trees in the tropical rainforest regions in Nigeria are evergreen and they are so tall that they form a continuous canopies at the top, giving shades at the bottom. Rainforests are made up of three layers.

The top layer or canopy is made up of giant trees which grow to heights of 75 metres or more. The middle layer is made up of middle branched tall trees and can grow up to 30 metres high. The lower layer is the last layer with trees that hardly grow higher than 10 metres.

The tropical rainforest in Nigeria is located in the southern part of of the country, especially in the Niger-Delta region.

The Guinea savanna vegetation is characterized by tall, high grasses and has an average rainfall between 1000mm – 1500 mm. It is the largest vegetation belt in Nigeria and its characteristics include the following:

Guinea savanna covers most parts of Nigeria, some of which include Kaduna, Oyo, Enugu, Anambra, Edo, and Ondo States, to mention but a few.

The Sudan Savanna spans the entire North of the country. It comprises of short grasses and trees in this vegetation type are far fewer than what is obtainable in the Guinea Savanna. This vegetation belt receives rainfall of 500mm – 1000mm every year, meaning that the amount of rainfall it receives is lower than what is obtainable in the tropical rainforests and the Guinea savanna.

The Sahel Savanna is mainly situated in the north-eastern part of the country. States where the Sahel is located are usually very dry, with desert environments, with little or no rainfall and this affects crop cultivation.  Only tough plants which are adapted to desert life can survive in this vegetation belt.

The Sahel savanna is made up of grasses which are extremely short. Plants species which can be found in this vegetation belt include Acacia raddiana, African myth, Ngibbi, Leptadenia to mention but a few. Camels are animals mostly suited to this type of environment as they have extreme water retention abilities.

Salt water swamp is found in the coastal regions of the country. This vegetation type can be found in areas such as Sapele in Delta State Lekki and Badagry in Lagos State and other coastal areas in the country. Salt water or mangrove swamp areas form as a result of fresh water from rivers meeting with the salt water from the Atlantic ocean, forming the brackish swamp.

The salt water then flows into the creeks and lagoons. Various mangrove vegetation in Nigeria is sustained due to the condition of the Saline Water. As a result of the salt being extremely salty in this vegetation type, plant cultivation and growth is unsuitable. Swampy areas with little or no salt concentrations in the soil are excellent for rice cultivation.

As the name implies, fresh water swamp consists of lots of freshwater. The vegetation comprises of freshwater that comes from the inland rivers and rainfalls and it spans States such as Cross River, Niger Delta, Imo, Benin and Ogun. This means that this vegetation type can be found around the Niger-Delta region. Raffia palm is one plant that thrives in freshwater swamps. Oil palm as well, under the right conditions.