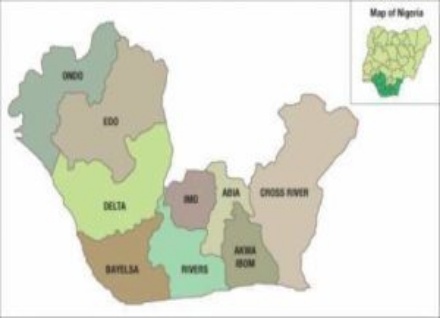 Initially, the Niger-Delta Region consisted of only three States which are: Delta, Rivers and Bayelsa States respectively but in the year 2000, six other States, namely: Akwa Ibom, Cross River, Ondo, Edo, Imo and Abia were added by the then President, Olusegun Matthew Aremu Obasanjo to the existing three to bring the region to a total of nine States because of their crude oil producing abilities.

Below is a list of the nine (9) States that make up the Niger-Delta region in Nigeria today:

Akwa Ibom State is located in the South-South geopolitical zone in the country. The State presently ranks as the highest crude oil producing State In the Niger-Delta Region. It is also the highest oil producing State in the whole of Nigeria and one of the smallest, if not the smallest State in the country after Lagos. The current population of the State stands at about 5 million people and the capital of the State is Uyo Capital Territory. Akwa Ibom State is very famous for crayfish business in Nigeria with the town of Oron being the headquarters of the best crayfish sourced in the country.

Rivers State used to be the largest producer of crude oil in the country before Akwa Ibom took over. The State is very rich and is located in the South-South geopolitical zone in Nigeria. Even if it has lost its crown as Nigeria’s highest oil producing State, it comes third on the list and no other State can rival it for this bar Akwa Ibom and Delta States. The capital city of Rivers State, Port-Harcourt, is a very important city in Nigeria economically.

Rivers State has two oil refineries, giving it the status of a major oil refining State in Nigeria. Little wonder when you look up Nigeria’s 36 States and their slogans, Rivers prides itself as the Treasure Base of the Nation. The State is one of the most populous states in the country with a population of over 5 million people. Ethnic groups that can be found there include: Ikwerre, Okrika, Upobo, Kalabari or the Ubani, etc.

Delta State is the second largest oil producing State in the country and it is located in the South-South part of the Niger-Delta region. The State is known as the big heart of the nation. It is also one of the richest states in Nigeria with its capital city situated in Asaba, on the other side of the River Niger just before you cross into Onitsha, Anambra State and the entire Igboland.

Delta State, along with Edo State, were collectively known as Bendel State, and the State has a major refinery in the country located in Warri, one of its most important cities. Some of the most widely spoken languages in Nigeria are spoken in Delta State.

Bayelsa State is one of the six South-South States which form part of the Niger-Delta region. The State is home to Nigeria’s former President, Goodluck Ebele Azikiwe Jonathan. Bayelsa State is also very rich in terms of crude oil production and its capital city is Yenagoa. It was in Bayelsa, Oloibiri previsely that crude oil of commercial quantity was first discovered in Nigeria in 1956. The State is one of the least populated in the country. It is also the State with the least number of Local Government Areas in Nigeria (8 LGAs).

Cross River State is the fifth South-South State in this list of 9 Niger-Delta States in the country. It is also among the oil rich States in the country and its capital is Calabar, a very beautiful city in Nigeria with good road networks and a serene atmosphere. Cross River State is blessed with numerous natural resources, tourists sites such as Obudu Cattle Ranch and Tinapa Resort. The State has a population of over 3 million people.

Edo State is the last South-South State that makes up this list. The State also has an abundance of crude oil and it used to be known as Bendel State along with Delta State. Its capital city, Benin City is a very famous city in West Africa as it was home to the legendary Benin Empire. Edo State has a population of more than 2.2 million people. Major ethnic groups in the State include: Esan, Igarra, Etsako/Afemai and the Okpamheri to mention but a few.

Abia State is one of the two South-Eastern States that make up this list of States in the Niger-Delta region of Nigeria. The State is oil rich and is home to many native Igbo Speakers. The Capital of the State is Umuahia but the city with the most important economic value to the State is Aba which is very famous nationwide for its shoe making business. Abia state has a population of over 2.8 million people. It is one of the smallest States in Nigeria.

Imo is known as the Eastern Heartland. It is one of the two States from South-East geopolitical zone in Nigeria that forms part of the Niger-Delta region, the other being Abia State as aforementioned. The State is home to a population of over 4 million people and have Owerri city as it capital. Like Abia State, Imo is a predominantly Igbo Speaking State.

Ondo State is the only State from the South-Western part of the country that forms part of this list and it completes this list of 9 States that make up the Niger-Delta region. Ondo is predominantly a Yoruba speaking State with the Ijaw people forming a minority ethnic group. It has a population of over 3.4 million people and Akure is its capital city.