In this post, we will enlighten you on the Igbo speaking States in Nigeria also known as the South-Eastern States, and provide a comprehensive list to that effect. Just as we have done with the Yoruba speaking states in Nigeria, we will also list and explain in detail all the states in the country where the Igbos are very largely concentrated, where they call home. Religion in Igboland is mostly Christianity. 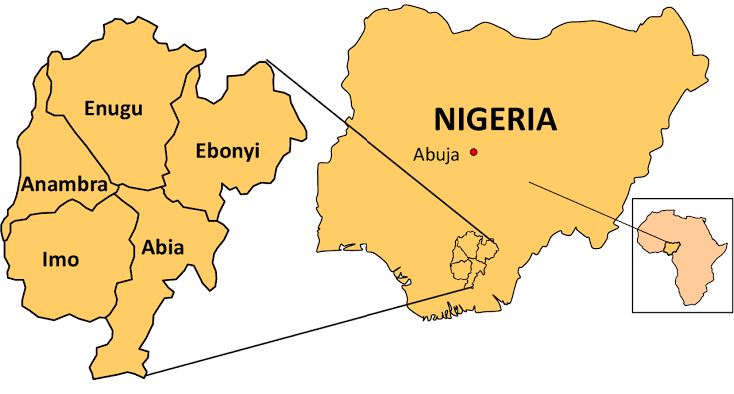 The Igbo people are one of the major ethnic groups in Nigeria. They can be mostly found in the South-East geopolitical zone of the country and due to this, every land in that part of the country where the Igbos originate and are settled in is known as Igboland. The entire vastness of all Igboland is also known as the Land of the Rising Sun as it is believed that the Sun rises first in the East and sets in the West. One characteristic trait of every Igbo person is their never say die attitude which helps them to be very industrious; that ability to create wealth out of nothing has always been something that has been passed on from generation to generation. Igboland is where you will find the majority of people who speak the Igbo language, which is one of the most popular spoken languages in Nigeria.

As you well know, the three major ethnic groups in Nigeria are: Igbo, Hausa and Yoruba and every one of these Nigerian peoples and cultures are mostly found living in large communities which is their native abode in specific regions in the country even though they migrate to other parts of the federation and are free to live and work in any part of the country. Igbos are concentrated in the East or South-East, Yorubas to the South-West and Hausas to the North.

The Igbo people are among the most organized people in the country and on the continent at large. They are also among the most educated and their unique business sense, with all due respect to other ethnic groups and tribes in Nigeria, is second to none. The effects of the Nigerian Civil War are still felt in Igboland till this day but with resilience and determination, the Igbo Nation has been able to overcome all that to stand strong. They make up about 29 per cent of the entire population of Nigeria and they have produced more billionaires in the country than any other tribe.

Below is a list of all South-Eastern States in Nigeria, otherwise known as the Igbo Speaking States:

Imo State is the richest state in the South-East of Nigeria and home to many native Igbo speakers. The state is known by the slogan “Eastern Heartland” and it is believed that no matter the dialect of Igbo language that you speak, the Imo Igbo is the central Igbo, what all Igbo people call Igbo Izugbe and it the central Igbo is native to the people of Owerre (Owerri) and Umuahia (formerly a city in Old Imo State but now the capital of Abia State). Imo State got its name from the Imo River, one of the major rivers in Nigeria.

The capital of Imo State is Owerri and it also doubles as the largest city in the state. Imo State has produced notable politicians in Nigeria, such as Sam Mbakwe, former Governor of Old Imo State; Evan Enwerem, former President of the Senate; Emmanuel Iwuanyanwu, Founder of Iwuanyanwu Nationale (Now Heartland Football Club); Emeka Ihedioha, former Deputy Speaker of the Nigerian House of Representatives; and Samuel Anyanwu, Former Senator of the Federal Republic of Nigeria representing Imo East Constituency.

Imo State is one of the richest states in Nigeria and an oil producing state. The state is also one of the nine Niger-Delta states in the country and it is also blessed with an abundance of mineral resources. The State has within it 163 oil wells at 12 different locations making it a host top petroleum companies such as Chevron Corporation, Addax Petroleum, Agip and Royal Dutch Shell.

Anambra State is along with Imo State, the oldest Igbo state in Nigeria and it is arguably the most popular of all South-Eastern states. The state has a very large concentration of native Igbo speakers living within it and it is a very important state in all of Igboland. It is believed that the Igbo race began in the town of Nri (with Igbo-Ukwu as its capital) and Aguleri, who are part of the Umueri clan in Anambra State. Anambra State is a seaport state due to its proximity to the River Niger and Onitsha is its most important city.

Anambra State is home to the largest number of billionaires in Nigeria  as well as the most important indigenous vehicle manufacturing and assembling company, Innoson Motors situated in Nnewi, another very important City in the State. During the Nigerian Civil War, the town of Uli in present day Ihiala Local Government Area was a very important town in Igboland because it was in this town that the Biafra troops built their airstrip for take off or landing of aircraft mostly at nights.

The State got its name from the River Anambra, one of the longest rivers in Nigeria and it is also an oil producing state. Notable people from Anambra State include Nnamdi Azikiwe, First President of Nigeria; Chuba Okadigbo, Former Senate President of Nigeria, Dora Akunyili, Former Director-General of NAFDAC and Former Minister of Information and Communication; Chukwuma Soludo, Former Governor of the Central Bank of Nigeria; Peter Obi, Former Governor of Anambra State and Former Vice Presidential Candidate under the PDP.

Abia State is another Igbo Speaking State and it was carved out of Imo State in 1991. The Capital of Abia State is Umuahia, another town, apart from Owerri that is known to speak the central Igbo language. The major city in Abia State is Aba, home to the nationally and internationally famous shoe manufacturing industry which keeps getting better and better with the passage of time.

Abia is one of the two Igbo oil producing states that are located in the Niger-Delta region of the country, the other one being Imo State. The famous Enyimba International, a football club that has gained both local and international fame is located in Abia State, Aba precisely. Notable Nigerians of Abia origin include Michael Okpara, Second Premier of the Eastern Region; Bright Chimezie, a popular Nigerian Musician; Michael Emenalo, former Nigerian footballer and former Football Technical Director at Chelsea Football Club and AS Monaco; Ben Iroha, former Nigerian footballer; Eni Njoku, Nigerian Botanist and Educator to mention but a few.

Enugu State is one of the best Igbo States with good roads and a serene atmosphere to live and work in. The state was carved out from Anambra State in 1991, it houses the famous University of Nigeria with campuses in Nsukka and Enugu, the State capital. UNN is one of the five most reputed universities in Nigeria.

Enugu State is famous for an abundance of coal and it is no surprise that it is known by its slogan, “Coal City State”. The Capital City, Enugu was the capital of the Eastern Region after Nigeria got her independence from Great Britain in 1960. Enugu was also the capital of the short-lived Republic of Biafra, giving it a status as the “capital of Igboland.” After Enugu was captured by the Nigerian armed forces, the Biafran capital was moved to Umuahia. Owerri was the last capital of Biafraland before it fell.

Important cities in Enugu State include Enugu, Nsukka, Agbani and Awgu and prominent schools in the state apart from the University of Nigeria, Nsukka include Enugu State University of Science & Technology, Institute of Management and Technology, The Federal Cooperative College, Oji River; Enugu State College of Education Technical, Enugu to mention but a few. Some notable people from Enugu State include the following: Chiwetel Ejiofor, an international film actor; Zain Asher, CNN Newscaster and sister to Chiwetel; Ken Nnamani, Former President of the Nigerian Senate; Ike Ekweremadu, Former Deputy President of the Senate; Flavour N’abalia, Nigerian Musician, to mention but a few.

Ebonyi State is the last but not the least state on this list of Igbo speaking states. The state was carved out from parts of Abia and Enugu States in 1996. Its capital and major city is Abakaliki. The State is one of the fastest developing states in the south-east with good road networks in the capital city. Other notable cities in the state include Afikpo, Onueke, Onicha to mention but a few.

Notable Nigerians from the State include Akanu Ibiam, Former Governor of the Eastern Region; Anyim Pius Anyim, Former Senate President of Nigeria to mention but a few.

In all, there are five purely Igbo speaking states in Nigeria and these five make up what is known as Igboland. Apart from the five original south-eastern states, there are also native Igbo speakers in parts of Delta, Edo, Rivers and Benue States. These people make up the minority ethnic group in their states. Some people from Cross River and Akwa Ibom States also speak Igbo fluently and they understand the in and out of the language.