This article contains comprehensive information about the biography and current (2023) net worth of Kingsley Chinweike Okonkwo, popularly known as KCee. He is a popular Nigerian singer, songwriter, celebrity and fashion icon who hails from Uli, Anambra State. KCee is the elder brother to popular Nigerian billionaire owner of Five star music, E-money 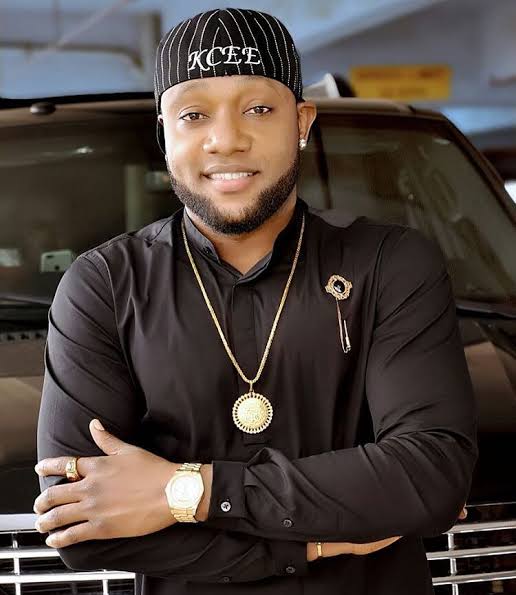 Kcee was born in Ajegunle, a modest area in Lagos State on April 18, 1979. He is the son of a DJ. His parents though modest, saw Kcee through his primary education in Ajegunle and his secondary education at Central High School, Isolo. Kcee was not born with a silver spoon in his mouth as he had to struggle to make ends meet. While growing up, he recounted what it was like growing up in the ghetto and he said that it was very tough and everyone had to struggle to survive, putting aside laziness and pursuing their dreams.

It was this zeal that took him far in life, knowing his humble beginnings meant he had to keep focus on his dream or die in the ghetto without making his mark on the sands of time, he pulled himself up and kept pressing forward. As a ghetto child, he understood first hand what it meant to aspire to succeed because he did not get everything he wanted on a silver platter so he decided in his mind that he was going to be famous and he set about doing just that.

While still very young, he wanted to be a professional footballer and he strived to play for the now defunct Julius Berger Football Club of Lagos and a later club called Puma. However, his career path changed when he joined a church choir and developed a strong liking for music. This was where he met his friend Presh and they formed the hip hop group, Kcee Presh. Kcee continued in music for twelve years with his long time friend Presh.

As stated earlier, they both met in a church choir, where they became choir members and struck a really great friendship which eventually led them to forming their own music group together with some of their friends. The said friends, Domino and Emmy, later parted ways with Kcee and Presh. Kcee’s decision to become a musician did not go down well with his father as he vehemently opposed the ambitions of his son and encouraged him to pursue a career in Medicine or Law. Kcee however, stuck with music and was able to convince his father to support and encourage him.

Kcee would later attend the University of Nigeria, Nsukka and bag a degree in Theatre Arts. He kept on making music, starting out as a rapper before eventually deciding to become a singer. The friendship of Kcee and Presh started in 1999 and as they continued to grow in the music industry, they both entered for the maiden edition of Star Quest in 2002, a TV reality show organized by Star Lager, under Nigerian Breweries. Their entry into the reality show/talent hunt proved really successful as they both won the show which established them as a hip hop duo in the Nigeria entertainment industry.

After winning Star Quest, Kcee and Presh signed with Kennis Music, the top music record label in Nigeria as at that time and continued to produce music. Later in their career, they decided to move on from the aforementioned music label to establish their own, which they named KP Records. KP Records was later renamed Blingz Records and under this record label, they released the album, No Time with the leading track from this album called Shokori bobo in 2008.

The duo continued to make music and won a few recognition along the way until 2011 when they parted company and went their separate ways to further their careers independently. Kcee is presently the principal musician and one of the decision makers of the Five star Music record label. The company organises the Uli music festival in Anambra State anually, with its maiden edition in held in 2018. In 2013, Kcee rose to prominence as a solo music artiste with the release of his debut album Take Over, with his hit single Limpopo wowing Nigerians.

With this, his popularity among many people in the country soared and he has since gone on to release other well received songs that have graced the Nigerian airwaves. Limpopo music video got him nominated for Next Rated Artsiste and Song of the year at the Headies music award organized by Hip TV. The video was also nominated for Most Gifted Dance Video at the Channel O music award later in 2013. Kcee has worked with top music artistes such as Harrysong, Skiibii, Davido and Akoo Nana. KCee is currently making waves with his new hit album, Cultural Praise.

As stated in the first paragraph of this article, Kcee and the business mogul Emeka Okonkwo, also known as  E-money are related by blood. They are siblings from the same parents and while many are confused on who is older between them, it will interest you to know that Kcee is the elder of the two. Kcee is the top talent behind the Five Star music label while E-money is the CEO of the brand. E-money has many businesses apart from owning a record label as he is into oil and gas, real estate, and shipping. His flamboyant lifestyle has led people to dub him Arab money, in addition to the already popular nickname, E-money.

Kcee is married to Ijeoma Oduah-Okonkwo, and their relationship is not very publicised on social media as he is a very private person when it comes to his personal life. It is said that they have been married for close to nine years now. Kcee and Ijeoma are blessed with two children, a boy and a girl. However, not much is known about them, as he keeps them off the drama of social media and public events.

KCEE NET WORTH AND INVESTMENTS

The net worth of KCee currently in this 2023 is estimated to stand at about $10 million, which is over ₦4 billion in Nigerian Naira; and being one of the most influential musicians in Nigeria, his wealth will continue to rise. Currently, Kcee is one of the richest and most influential singers in the country.

In 2013, Kcee signed a multimillion dollar deal with MTN. He also signed another mega endorsement deal with the telecommunications giant and Magnum in 2015. He was appointed peace ambassador of the federal republic of Nigeria during the administration of former President, Goodluck Jonathan, by his wife, and former first lady, Patience Jonathan.

Kcee reportedly owns two mansions, one in Lagos State and the other in Uli, Anambra, Nigeria from where he hails from. He is also the proud owner of a number of cars, some of which include a Toyota Land Cruiser Jeep worth ₦30 million, a Cadillac Escalade worth ₦29 million, a Mercedes Benz G-Wagon worth ₦35 million, a BMW 7 series worth ₦28 million, and a Range Rover sport with a customised plate number worth ₦26 million.