This is the amazing story of an aspiring Golden Eaglets Star on the rise. Meet Iwuajoku Boluwatife Adams, a young 18 year old modern left back who is capturing the hearts of top scouts in the Nigeria Football Federation through his electric pace and mesmerizing skills on the ball. 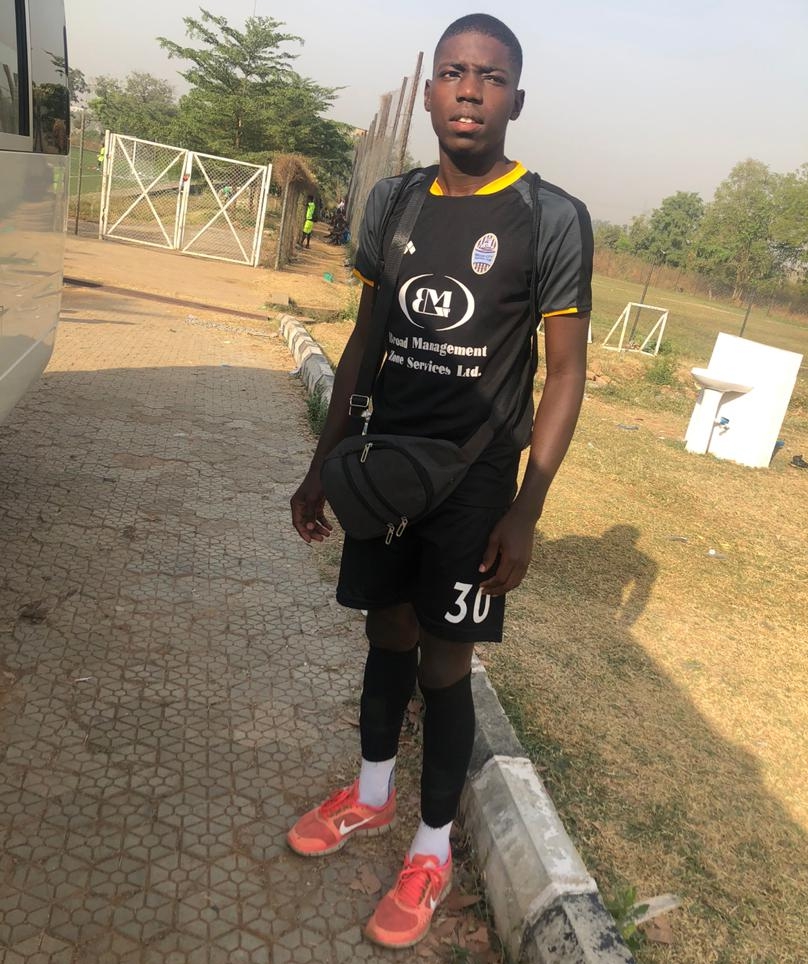 Following his Lagos Based Broadcity FC invite for football trial in Abuja by the Nigeria Football Federation (NFF), he has been able to showcase what he can do within a short time, earning him the admiration at the ongoing U-17 level screening in the Federal Capital Territory. His dream one day is to play in the famous Green and White shirt that has brought us glory on the global stage on five different occasions.

Having never played for a professional football team, and with his only experience coming from playing at one of the football academies in Lagos State upon the successful completion of his secondary school education, it is interesting to see why this lad is such a special talent.

Apart from being blessed with excellent natural football sense, the sheer force of will that this superstar in the making possesses is second to none and it is this determination to climb to the very summit of Nigerian football at his age level and possibly beyond that to potentially being capped by the Super Eagles someday that has driven him this far, being the best among his peers during the entire duration of their trial period. Taking it one step at a time, he has set his sights at first being enrolled into the legendary Golden Eaglets team of the Federal Republic of Nigeria, and who knows? Maybe other successes may follow.

Iwuajoku Boluwatife Adams, despite being on a lower fitness level than his peers who had been in camp for some weeks before his arrival at the trial ground in Abuja, quickly caught the eye when given the chance to showcase what he could do on the pitch of play. The officials and technical crew were so impressed that they enquired about his details, taking down his name in the process, and assigning him a number, inviting him to come back again the following day.

For a player so young as him, he has been described by those who have seen him take to the field of play as having electric pace, being able to bomb forwards and defend excellently when tracking back to his defensive duties, and having thunder in his boots, likening him to the legendary Nigerian footballer, Teslim “Thunder” Balogun, one of the all time best Nigerian footballers ever. This in itself is not bad at all for a 16 year old. He is indeed the dream full back for any top side.

Boluwatife is a footballer that has the type of strength that only those above his age possess. Still on trial at the Golden Eaglets camp, he is going to be a mainstay for the Golden Eaglets and possibly the Super Eagles of Nigeria in the years to come if he is given the green light to join the original players in the team as a bona-fide member of the squad. He can rewrite his story and the story of Nigerian football if given the all clear to turn up for our nation in the famous Green and White shirt.

Iwuajoku Boluwatife Adams can be a true superstar and potentially a legend of the beautiful game as a Nigerian International if his talent is harnessed and put to good use in our national team. He has what it takes to succeed at the highest level and it is our belief that he will truly shine for the Golden Eaglets if he is if called up and not allowed to go the way of others who merely had a dream but were not allowed to live that dream through nepotism in the country.