In this article, we shall look at the history of the different types of constitutions we have had in Nigeria to date. A constitution is a written document of any country that contains all the laws that guides and superintends over the conducts of the citizens and people resident in that nation. It spells out the roles of government and the citizens of a country and ensures that no one goes against any of the rules and regulations stated in the laws of the land. A constitution also guides the decisions of government, defines the sovereign powers of a country, and guarantees individual civil rights and liberties, superseding every other law of a country or state. 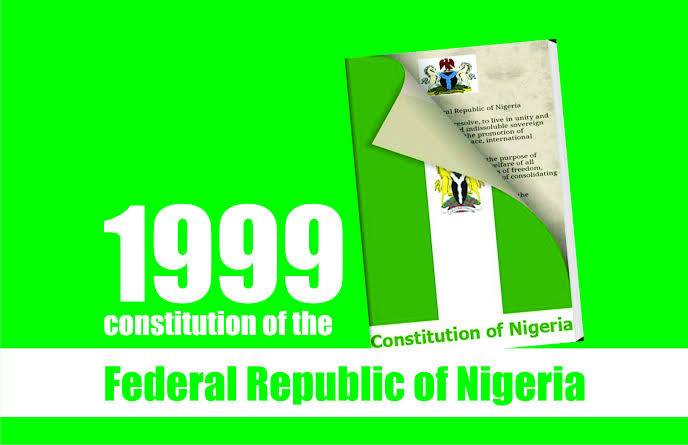 CONSTITUTIONAL DEVELOPMENT IN NIGERIA: THINGS YOU SHOULD KNOW

Constitutional development in Nigeria has been in place since the year 1914 and this continued to change or evolve over the years until 1979 when considerable additions were put into our supreme, binding document several years after the Nigerian Civil War. The addition of content to the Nigerian Constitution which is a very difficult process continued in 1999 which led to certain amendments that are still in force to this day. To date, the 1999 constitution of the Federal Republic of Nigeria is our most current constitution and it is still very effective.

In 1861, after Lagos fell to the British and was made a separate colony from the rest of Nigeria, the colonial government set up a legislative and executive council and in 1862, the Colony of Lagos and other British colonies in the Gold Coast (Now Ghana) were placed under the authority of a Governor-General who ruled from Sierra Leone.

In 1874, Lagos and the Gold Coast were declared individual colonies and in 1886, Lagos colony had its own Governor, as well as its own Legislative and Executive Councils. Lagos colony continued as a separate British political territory until 1906 when the Colony of Lagos and the Protectorate of Southern Nigeria were united, effectively empowering the Legislative Council of Lagos to make laws.

Instead of the Legislative Council, an advisory body, known as the Nigerian Council, was accepted to make laws for the country. This council comprised of thirty members of which seventeen were officials and thirteen were non-officials. Four of the non-officials were assigned by the Governor of Nigeria to introduce shipping, commercial, banking, and mining interests. The Calabar Chamber of Commerce, Chamber of Mines, and Lagos Chamber of Commerce had only one member each.

The Clifford constitution was conceived in 1919, when the colonial Governor of Nigeria, Sir Hugh Clifford, after assuming office was pressured by the West African Congress, led by Casely Hayford, to make written documents that will serve as supreme laws for the country, something being practiced in some West African nations. As a result of this, Nigeria got her own constitution in 1922 and it was named the Clifford Constitution, After the Governor at that time.

The Clifford Constitution was the first to introduce the concept of voting in Nigeria. This ensured that the first voting process was held in the legislative council with four slots of which Lagos got three and Calabar got one. However, the criterion for voting was that only those who earned a minimum of 100 pounds had the right to vote and this became an expensive venture for many Nigerians.

The constitution of 1946, also known as the Richard’s constitution was passed as a result of the enactment of the Westminster Style Parliamentary Constitution in the country. The constitution ensured that power was reserved in the hands of the Governor of Nigeria and his appointed Executive Council. It was named after Sir Arthur Richards, the Governor at that time because he was responsible for its enactment.

The Richard’s Constitution ensured that Legislative Council was expanded and empowered to deliberate on matters affecting every part of the country. It also established other legislative houses called the houses of assembly which were located in each of the three regions of the country so as tend to the matters arising at all the regions and to advise the lieutenant-governors in those regions.

The Richard’s constitution also introduced the federal principle which recognized the importance of the nation’s diversity. The federal principle ensured that deliberative authority was delegated to all the regions of the country from the centre. This constitution promoted regionalism instead of federalism and it was suspended in 1950 because every region in the country wanted greater autonomy which opposed the federal central rule.

The Lyttleton Constitution was named after Oliver Lyttleton. Anthony Enahoro of the Action Group proposed the need for this constitution with one eye on Nigeria becoming independent by 1956. The representatives of Northern Nigeria felt at that time that they were not ready for independence and moved to oppose it and threatened to break away from the country.

For this reason, Oliver Lyttleton, a colonial secretary at that time, suggested that a conference be held in London to discuss and settle a lot of issues. The outcome of that conference formed the basis of the Lyttleton Constitution in 1954. The Lyttleton Constitution established a federal system, which comprised of Northern region, Eastern region, Western region, and Southern Cameroons, with the Federal capital territory firmly established in Lagos.

The constitution abolished the West African court of appeal; it however established the Nigerian Supreme Court and a number of regional high courts. The constitution made provision for the regions to govern themselves and the western and eastern regions started self-governance in 1957. Two years later, the north began self-governance. Southern Cameroon however opted out of Nigeria through a referendum.

As Nigeria gained independence from Great Britain on October 1, 1960, the country retained the Queen of England, Elizabeth II as Head of State of Nigeria. The Queen was represented by Dr. Nnamdi Azikiwe, who was the last and only Nigerian Governor-General, while Sir Abubakar Tafawa Balewa became the Prime Minister.

A constitution was enacted in 1960 and its purpose was to completely remove foreign influence in Nigeria especially in its government. This constitution drew inspiration from the 1954 constitution but with a number of changes. Provision for citizenship acquisition was made in the new constitution, constitution amendment was also provided for. Nomination formed the basis for appointing judges for the courts and the highest court of appeal in Nigeria according to the independence constitution was the Privy Council.

The republican constitution also recognized the Supreme Court as the highest court of appeal in Nigeria, and gave the Prime Minister powers to appoint judges. It also increased senate membership from 44 to 56 and the house of representatives was increased 305 to 312. This was brought about by the creation of the Mid-western state.

In 1993, during the third republic, the 1993 constitution was enacted so as to establish democratic rule but it was not fully implemented because of the military coups and counter coups which led to the return of the country to a military rule until 1999.

THE PRESIDENTIAL CONSTITUTIONS OF 1979 AND 1999

This presidential constitution of 1979 was championed by General Olusegun Obasanjo, who at that time was Head of State of Nigeria. He constituted a 49-member constitution drafting committee which was headed by F.R.A Williams. The constitution was amended by Justice Udo Udoma and it was instituted on October 1, 1979.

This effectively ended the parliamentary system of government and ushered in the presidential system, making the President both the Head of State and Head of Government. The constitution also determined that electorates should choose the President. The senate membership was increased to 95 and the House of Representatives’ membership was increased to 450.

The 1999 constitution was able to restore democratic rule to Nigeria after several years of military rule and it is the current constitution in use. Since enactment, it underwent two amendments in January 2011. These amendments were sanctioned by the then President Dr. Goodluck Ebele Jonathan.