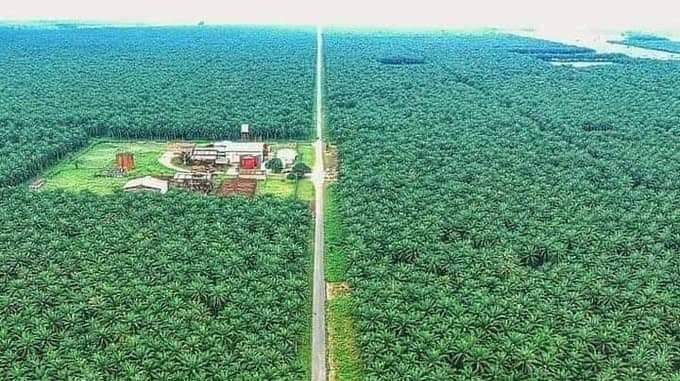 The following are the major palm oil producing States in Nigeria this 2022:

One of Nigeria’s most important palm oil producing States is Akwa Ibom. This State is also one of the richest States in Nigeria located in the Niger Delta region in the South-South geopolitical zone of the country. The oil palm plant is a tropical perennial crop that thrives predominantly in the tropics, and Akwa Ibom, being a tropical State, favours the growth of this very important cash crop in Nigeria. As a matter of fact, Akwa Ibom State has a large number of palm oil production sites and refineries, all of which have significantly contributed to the area’s palm oil production output. Apart from palm oil, the State is renowned for having a healthy deposit of mineral resources such as glass, sand, limestone, to mention but a few, all of which are complimented by the State’s petroleum resources, which rank first in terms of output in the country at large.

Cross River State, which is located in Nigeria’s South-South geopolitical zone, contains vegetation that supports the production of palm oil. Calabar is the capital City of the State, which shares a border with Cameroon. The inhabitants of Cross River State are renowned for their hard work and love of farming; and because the State is very rich in crude oil, the State isn’t left out when it comes to other sources of revenue generation. Cross River State generates over 200,000 metric tonnes of palm oil and has over 360,000 hectares of land set out particularly for palm oil cultivation, including local farmers for massive production of the crop.

Rivers State is another State that has an abundance of natural resources and is surrounded by water. The land and vegetation are ideal for oil palm farming and the State has been ranked among Nigeria’s leading palm oil producers. Rivers State is one of the country’s most populated States, and crude oil is the State’s main source of revenue. However, aside from crude oil, there are other things that generate revenue for the State and the country at large, of which palm oil production is but one. The main palm oil production areas in Rivers State are concentrated in the Etche and Ikwerre local government areas of the State.

Abia State is the main producer of palm oil in the South Eastern part of the country. The State is well-known for palm oil production, and according to data acquired from the ministry of agriculture, Abia state produces about 190,000 metric tonnes of palm oil annually, with a large amount of palm kernel, putting it in fourth place among the top palm oil producers in Nigeria currently. Abia State also produces cashew, plantain, cocoa, rubber, and a variety of other crops, all of which have helped to enhance the State’s Internally Generated Revenue (IGR).

Edo State also ranks among the highest producers of palm oil in the country today. It is blessed with favourable climatic conditions that ensures great crop yield and the Edo State government recently commenced the Edo Oil Palm Initiative by mapping out 51 hectares of land to start the scheme. This was done before of the increase in palm oil production in the State in recent years.

Ondo State is a Yoruba speaking State that ranks among the highest palm oil producing States in Nigeria today. Majority of the State’s internally generated revenue is gotten from agriculture of which oil palm farming plays is significant. Apart from being a large palm oil producer in Nigeria today, Ondo State is also well known for the cultivation of agricultural produce such as vegetables of all kinds, fruits, cassava, coffee, maize, rice and yam.

This list of largest palm oil producing States in Nigeria will not be complete if we do not mention Delta State in it. The State is blessed with the climatic conditions that favour the cultivation of oil palm and if you move almost all round the State, you will see an abundance of palm oil trees scattered throughout Delta. The Delta State Government has also been very supportive of the cultivation of this cash crop to boost the economy and this is very evident in the provision of 1.2 million hectares of land for palm oil production, with the project being supported by the Central Bank of Nigeria (CBN) which also favours job creation for the youths of the State.

Bayelsa State also has oil palm playing a leading role in boosting their economy and this is evident in the State boasting of having an abundance of semi-mechanized oil palm mills operating within it.

Anambra State is also a ranking palm oil producing State in Nigeria today and this is helped by the fact that the State is situated in the tropical rain forest vegetation zone of the country. The Government of Anambra State also encourages farmers within the State with great initiatives on how best to ensure a great crop yield to boost the economy of the State and maintain its status as a leading palm oil producer in the country.