This article focuses on Nigeria’s highest-paid military forces currently in this year 2022. You may have wondered which arm of the Nigerian Military receives the greatest pay, and you may have even looked it up online, which is why you have come to this page. You need not worry since you have arrived at the right place, and we will inform you as to which branch of our military forces receives the highest pay. Stay with us for a moment and we will tell you whether it is the Nigerian Army, Nigerian Navy, or Nigerian Air Force. 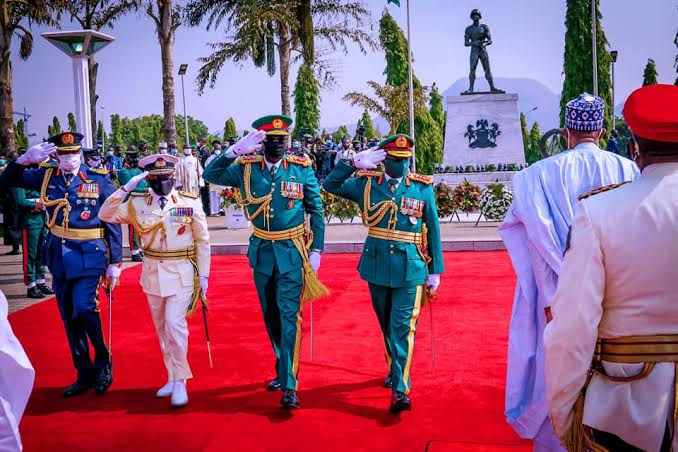 In order to find out which of our military forces is the highest paid in Nigeria today, we will compare their monthly wage structures so that you can determine for sure which military branch of the country has the greatest pay. We have thorough information on all salary structures of the Nigerian armed forces as mentioned in the links above for each one, but we will condense it in this article as a sort of comparison so that you can receive first hand information on which of our military outfits is best paid. Let us get started without further ado.

The following are the highest paid military forces in Nigeria currently in this year 2022:

The Nigerian Army, which is made up of multiple army divisions, is the major component of our armed forces. During wartime, the Nigerian Army is responsible for safeguarding Nigeria’s land boundaries and ensuring our territorial integrity on the ground. The following is the monthly compensation scale for all Nigerian army officers, from the lowest ranking officer to the highest ranking officer:

The Nigerian Navy (NN) is a branch of the Nigerian Armed Forces tasked with defending the country at sea. The Nigerian Navy is in responsibility of protecting our territorial waterways, and it is organized into a number of command centres that assure its smooth operation throughout the Federation. The following are the current monthly wages for all Nigerian Navy officers, from the lowest ranked officer to the highest ranking officer:

We do not currently have information on the salary scale for Nigerian Navy ranks such as Chief Petty Officer, Petty Officer, Leading Rating, Able Rating, and Ordinary Rating

The Nigerian Air Force (NAF) is the branch of the Nigerian Armed Forces responsible with air defence of the country, as its name implies. It is made up of various air force bases scattered across the country, most of which are located within the grounds of Nigeria’s major airports, and its personnel are highly educated in air combat to safeguard Nigeria’s territorial integrity. From the lowest ranked officer to the highest ranking officer in the Nigerian Air Force, the monthly wage structure is as follows: