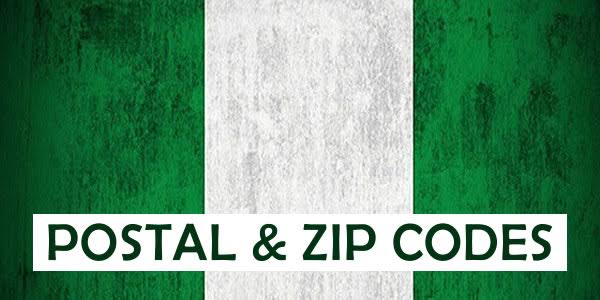 Postal code or postcode is a unique code or group of numbers in Nigeria, usually six numbers, all written together without being spaced, that are used as certain types of indicators in order to deliver mails and parcels to the right place. A postal code helps post offices to deliver parcels to the right address correctly without making mistakes that usually delays the delivery of a parcel by more weeks or months. As earlier stated, postal codes in Nigeria are a sequence of numbers which state perfectly the location a mail is delivered to.

Postal codes are also known as Zip codes In the United States. This is their own unique number combination that helps them deliver parcels from place to place effectively in their country or from their country to anywhere overseas, and that is why when filling forms online from the United States, instead of asking you for postal code, they ask for zip code. Don’t be discouraged, they are the same and can serve the same purpose, only that the term “zip code” is peculiar to the United States.

As earlier stated, postal codes in Nigeria comprise of six digit numbers; the first three digits being the regional set of numbers, that is, the district for the outgoing sorting; while the second three digits symbolize the delivery location, usually an urban area or a post office. Be informed that no single postal code works for all areas within Nigeria, meaning that if you have always thought that 23401 or 110001 applies to the whole of Nigeria, your assumptions are wrong as the postal codes for every state in the federation are very different.

The development of the use of postal codes was encouraged in order to prevent post offices from doing too much work as a result of the increasing complexity of postal deliveries due to the ever increasing population in the country as well as the increase in the number of buildings in many states of the federation over the years.

Initially, what is now known as postal codes in the world started as postal zone numbers but around the 1930s, the thought of expanding and extending this zonal numbering beyond most major cities so as to cover small towns came to the fore. The current postal code system was introduced in 1932 by the Union of Soviet Socialist Republic (USSR) and even if it initially faced some problems, more countries continued to embrace it from 1941 till date and it has been a global success.

If you want to know the postal code for your state, this information below has provided every state post code or zip code so that whenever you are required to state or give it, especially during online transactions, you will do that comfortable without breaking much sweat trying to guess. The information below is given so that you can find the one for your state and memorize it.

LIST OF POSTAL CODES IN THE 36 STATES IN NIGERIA

This is the full list of postal codes in Nigeria’s 36 states. Find below the postal code suited to your area and keep it in memory. You do not have to know everything by heart, just the postal code for your state of residence will suffice.