This article contains the full list of army divisions in Nigeria this 2023. The Nigerian Army (NA) is the largest component of our nation’s military which is in charge of overseeing the defence of the country’s territory on land. This core part of the Nigerian armed forces is responsible for land warfare and its history is very much intertwined with the history and governance of our great nation. 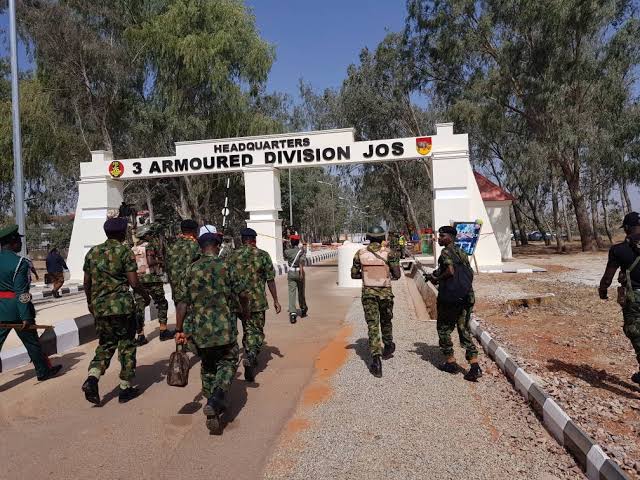 The Nigerian army has over the years distinguished itself in peace keeping missions in other countries of the world and it is duly recognized as one of the strongest military forces in Africa. The NA is governed by the Nigerian Army Council (NAC) and it is the main military component of our armed forces involved with fighting insurgency and terrorism in the country.

This land branch of the Nigerian military comprises of several divisions and according to Wikipedia, an army division is a large military unit or formation that is made up of 10,000 – 25,000 soldiers. Army divisions are led or commanded by Major-Generals and they can also be said to be a group of army brigades and regiments. In the Nigerian Army, as it is with many other armies in the world, a division is larger than a brigade which in turn is larger than a battalion.

The following is a comprehensive list of all Army Divisions in Nigeria this 2023:

The 1st division of the Nigerian Army was established in 1967 during the Nigerian civil war. This division is headquartered in Kaduna and it ensures that the North-Western geopolitical zone in the country is well secured. It also ensures the security of every border located around its Area of Responsibility. The 1st division is a mechanized infantry with affiliated combat support and combat service support units. It is made up of the following:

The 2 division is headquartered in Ibadan, the Oyo State capital. This division is made up of a mechanized infantry with affiliated combat support and combat service support units and it is charged with the responsibility of securing its Area of Responsibility (AOR) covering the South Western flank of Nigeria and also ensuring that the borders located in its AOR are secured. Components of the 2 Division of the Nigerian Army include:

The 6 Amphibious Division of the Nigerian Army was established in 2016. It is one of the newest divisions in the NA with its headquarters located in Port Harcourt, the Rivers State capital. It is saddled with the responsibility of securing the Niger Delta or coastal region of the country as well as the oil and gas assets and infrastructure located there. The 6 Amphibious Division of includes the following:

The 7th Infantry Division was established in 2013 and headquartered in Maiduguri, Borno State for the sole purpose of fighting the Boko Haram terrorism rocking the North-East. It secures the North-Eastern States of Adamawa, Maiduguri and Yobe. Its formations include the following:

The 8 Division was established in 2017 and its headquarters is located in Sokoto. It was also formed as part of the strategic plan by the Nigerian Army to boost military operations against terrorists in the northern part of the country. The 8 Division was established in order to secure Sokoto, Kebbi and Katsina States in order to check the activities of Boko Haram in the north.

81 Division of the Nigerian Army is headquartered in Lagos as a replacement for the old Lagos Garrison Command which had been in existence since the colonial era. This Division which replaced the Lagos Garrison Command (LGC) was established in 2000 and it is charged with the responsibility of securing its Area of Responsibility (AOR) covering Lagos and Ogun States, which are economic nerve centres of the country. The 81 Division also ensures that the borders located in its AOR are secured. The division is a mechanized infantry with affiliated combat support and combat service support units

82 Division of the Nigerian Army is headquartered in Enugu and it was formed in 1975.  This Division is charged with the responsibility of securing its Area of Responsibility (AOR) covering the South Eastern and South Southern flanks of Nigeria and also ensuring that the borders located in its AOR are secured.  The division is a composite division with affiliated combat support and combat service support units.