This article is a comprehensive compilation of the full list of all universities in Anambra State this 2022. We previously brought to you the list of universities in Imo and Lagos States, and we thought it wise to bring to you all top tertiary schools in Anambra State to serve as a guide considering the number of students who from the south eastern part of the country would love to study at some of the best schools in this geopolitical zone of Nigeria. 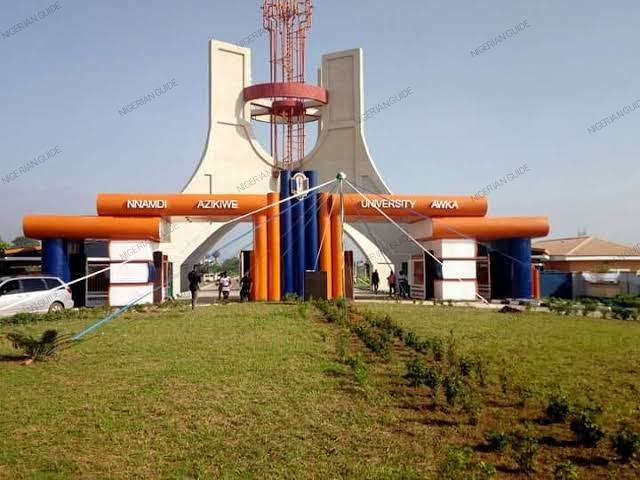 All these universities are properly discussed in great detail below. Kindly continue reading to find out more.

The following is a comprehensive list of all universities, whether federal, State or private, located in Anambra State, Nigeria this 2022:

Nnamdi Azikiwe University is a federal government university, and it is located in Awka, the Anambra State capital. This university was established on the philosophy that knowledge should be propagated and disseminated to individuals without let or hindrance. Teaching and Research are at the core of the university’s activities. Nnamdi Azikiwe University came into being as an offshoot of the defunct Anambra State University of Technology (ASUTECH). ASUTECH which was established through Law No. 7 of 30th July 1980 by the Government of the old Anambra operated as a multi-campus university, with campuses in Abakiliki, Enugu, Awka, and Nnewi.

In 1991, following the split of the old Anambra State into Anambra and Enugu States, the Awka and Nnewi campuses of the former ASUTECH were constituent into Nnamdi Azikiwe University by the Anambra State Edict No.5 of November 26, 1991. Nnamdi Azikiwe University was taken over by the Federal Government by Decree No. 34 of July 15, 1992. The enabling law of the University empowers the Senate to, inter alia, make provisions for:

The 2006 Amendment Law also provided that Alor Campus would house the University Administrative Headquarters because of its centrality to the other Campuses. However, Alor Campus did not take off, even though the enabling law prescribed its establishment. Meanwhile, the two Faculties of Law and Management Sciences are located at Igbariam Campus of the University.

However, in 2010 the College of Medicine and Teaching Hospital being constructed at Amaku General Hospital, Awka received legal backing as the State House of Assembly passed an amendment act to situate a third campus of the University a three campus structure at Uli (Anambra South), Awka (Anambra Central) and Igbariam (Anambra North).

Tansian University, unlike most other tertiary institutions of higher learning, was founded not to earn a name for itself or to amass material fortune, but to fulfill an inner need to educate youngsters and prepare them for the difficulties of a changing world. To accomplish this, the Father-Founder, Very Rev. Msgr Prof. John Bosco Akam, began the development process from kindergarten to secondary school education, as well as institutions for the poor and physically challenged, which explains why he is known as the Father of Enlightenment and the Legend of Education.

Prof Akam established Tansian University, which is named after Blessed Cyprian Michael Iwene Tansi, a unique African First Nigerian to be beatified. The main emphasis of the Tansian philosophy is to make a Licensed by the Federal Government under the close supervision of the National Universities Commission (NUC) on May 17th, 2007, Tansian University is determined to actualize its vision of being a dynamic institution with the noble philosophy of inculcating sound, high quality education, without compromising any moral issue.

Since inception, the University has continued to offer relevant academic programmes designed to produce highly qualified graduates that will be acceptable locally and globally and young men and women imbued with love of universal truth for the benefit of mankind. So far, they are consistently pursuing excellence and effectiveness in teaching with a view to producing knowledgeable and skilled graduates equipped to make positive contributions towards the resolution of societal ills. Tansian University is located at Umunya, Anambra State, with another campus situated at Oba.

Paul University, established in 2009, is a private Christian university owned by the Church of Nigeria (Anglican Communion). The school is located in Awka, the Anambra State Capital, and it is accredited by the National Universities Commission of Nigeria (NUC). In a variety of fields of study, Paul University offers courses and programmes that lead to officially recognized higher education degrees. Students at Paul University have access to a variety of academic and non-academic facilities and services, including a library and administrative services.

Legacy University, Okija is one of the eight private universities approved in 2016 by the Federal Government of Nigeria. Legacy University got the approval of the Federal Executive Council on November 2, 2016, and on the 22nd of November the same year, the University obtained license from the National Universities Commission, (NUC). Legacy University is located within a serene environment at Okija in Ihiala Local Government Area of Anambra State. It has a land mass of over 100 hectares. The university is located in Ubahumonum village, a distance of about 20 kilometres from Onitsha, along Onitsha-Owerri express way. The University is precisely located at about 3 kilometers off the Onitsha-Owerri expressway.