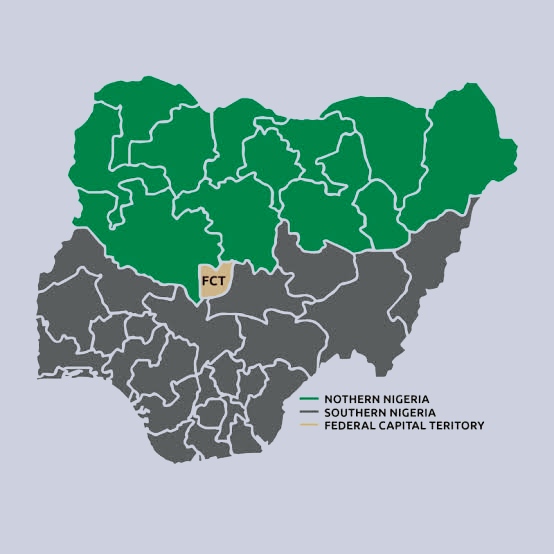 In the year 1960, Nigeria gained independence from Great Britain and became a Republic in 1963. From that time on, the country has been divided into States of which the North has the most number of States. From the time Nigeria got her independence from the colonial rule of the British, the country has been divided into regions, although, during the colonial rule, Frederick Lugard declared the Protectorate of Northern Nigeria at Ida, Kogi in 1897, this protectorate lasted till 1914 when it was amalgamated with the Protectorate of Southern Nigeria and the Lagos colony to become the Colony and Protectorate of Nigeria.

In 1967, seven years after Nigeria’s independence, 12 States were created all over the federation by the then Head of State, General Yakubu Gowon and Northern Nigeria was divided into the North-Eastern State, North-Western State, Kano State, Kaduna State, Kwara State, and the Benue-Plateau State, each with its own Governor. As the years went by, from these initial 6 northern States, other States that currently make up what is today, Northern Nigeria have been carved, and they occupy most of the land that makes up the entire country.

The following is a full list of all 19 States that make up the Northern part of Nigeria this 2022:

The full list of all the nineteen (19) States that make up the Northern part of Nigeria are briefly discussed below with their various dates of creation stated.

Adamawa State, which was formerly known as Gongola State, forms part of the full list of all northern States in Nigeria. It is the first State in northern Nigeria in alphabetical order, and it is situated in the north-eastern part of the country with Yola as its capital city. Gongola State became known as Adamawa State after Taraba State was carved out of it in 1991.

Bauchi State is yet another one of the 19 States that make up the northern part of Nigeria. Its capital and largest city is Bauchi. This northern State was established on February 3, 1976 from the former North-Eastern State. Bauchi State used to be part of what is now known as Gombe State.

Benue State is located in the North-Central geopolitical zone of Nigeria. It was carved out of the now former Benue-Plateau State on February 3, 1976 by General Murtala Muhammed. Benue State, whose slogan is the “food basket of the nation” and rightly so, is popular for the abundance of food crops found in it. Its capital city is Makurdi and the State is home to the Tiv, Idoma and Igede people.

Borno State is a northern State in Nigeria that is located in the North-East. It was carved out of the former North-Eastern Region on February 3, 1976 with its Capital and largest city being Maiduguri. Borno State is home to the Kanuri people.

Gombe State is another State that is located in the North-Eastern part of the country with its capital and largest city being Gombe. This northern Nigerian State was carved out of Bauchi State on October 1, 1996 by the then military Head of State, General Sani Abacha.

Jigawa State was carved out of Kano State on August 27, 1991 when the Federal Military Government under the General Ibrahim Babangida regime announced the creation of nine additional States in the country bringing the total number of States then to thirty. The announcement was given a legal backing through the State Creation and Transitional Provisions Decree No. 37 of 1991.

Kano State was created on May 27, 1967 by the Federal Military Government as one of the successors to the former Northern Region. Its capital and largest city is its namesake Kano, which is one of the most beautiful cities in Nigeria. Kano State is located in the North-Central part of the country and its Emir, the Emir of Kano is one of the first class Kings in Nigeria.

Katsina State was created out of Kaduna State on September 23, 1987, by the Federal Military Government under the General Badamasi Babangida regime. Its capital and largest city is Katsina. The main occupations of the people are farming, traditional handicrafts and animal husbandry. Maize, millet, guinea corn, cassava, irish potato, yams and beans are the major food crops, while cotton, tobacco, sugarcane, soya beans and groundnuts are the major cash crops.

The State is also one of the major producers of tomatoes, pepper and onions in the Country. Apart from crop farming, the State is one of the major producers of livestock such as cows, sheep, goats and camels. Hausa and Fulfude are the most widely spoken languages of the people. Islam is the predominant religion, even though there are still few known families living in homesteads that practice Christianity and traditional religion.

Kebbi State was created on August 27, 1991 out of Sokoto State. It is located in North-Western part of the country and its capital and largest city is Birnin Kebbi. The State shares borders with Sokoto State, Niger State, and Zamfara State.

Kogi State was established from parts of Kwara and Benue States on August 27, 1991 by General Ibrahim Babangida. Kogi State is made up of the Igala, Kabba, Ebira and Kogi Division of the former Kabba Province. It is the most centrally located State in the country and shares boundaries with the Plateau, Niger and the Federal Capital Territory (FCT), to the North, Benue and Anambra States to the East and on the West, it is bordered by Ondo, Kwara, Edo and Enugu States. It is popularly known as the confluence State because River Niger and River Benue meet at the its capital, Lokoja.

Kwara State was carved out of the Northern Region on May 27, 1967 by General Yakubu Gowon. Its capital and largest city is Ilorin. Kwara is predominantly a Yoruba speaking State and is located geographically in the South-Western part of Nigeria but is politically known as a North-Central State. Other ethnic groups and tribes that are found in6Kwara State include the Nupe, Bariba, and Fulani people.

Nasarawa state was created on October 1, 1996 from Plateau State by General Sani Abacha. It State shares boundaries with Kaduna State to its north, Abuja to its west, Kogi and Benue States to its south and Taraba and Plateau States to the east. Its capital and largest city is Lafia.

Niger State was created the then North-Western State on February, 3, 1976 by the then regime of General Murtala Mohammed. It has Minna as it’s capital. Other major cities are Bida, Kontagora, and Suleja. Located in the Middle Belt of Nigeria, Niger State covers 76,363 square kilometres. The State is known as the Power State because of the location of Kainji Dam, one of the most important dams in Nigeria that generates hydro-electric power for the country.

Sokoto State was created on February 3, 1976 from the North-Western region. Its capital and largest city is Sokoto which was also the capital of the former North-western State. Sokoto State in its present form came into being in October 1996 when Zamfara State was created by the then Head of State, General Sani Abacha.

Taraba State was created on August 27, 1991 when the Babangida Military Administration carved it out of the defunct Gongola State. The State derives its name from River Taraba and is made up of sixteen (16) Local Government Areas and two Special Development Areas. These areas constitute administrative units in three geopolitical zones with a total population of about four (4) million people. Its capital and largest city is Jalingo.

Yobe State derives its name from the Yobe River. It was carved out of the old Borno State on August 27, 1991, by the then Federal Military Administration led by General Ibrahim Badamasi Babangida. Yobe has a political structure comprising of 17 local government areas and 178 wards. It also has 14 emirate councils. Its capital is Damaturu. The State covers an estimated area of 47,153 square kilometers and shares borders with Borno State to the east, Gombe State to the south, Bauchi State to the west, Jigawa State to the north-west, and has an international border to the north with Niger Republic.

Zamfara State was carved out of Sokoto State on October 1, 1996 by the then regime of General Sani Abacha. It’s capital and largest city is Gusau. Situated in the North Western flank of Nigeria, Zamfara State occupies 39,762 square kilometres.