In this article, we shall be looking at the full list of all national parks in Nigeria this 2022. According to Encyclopaedia Britannica, a national park is an area set aside by the government of a country for the preservation of the natural environment. National parks may be set aside for the purposes of public recreation and enjoyment or because of its historical or scientific interest. In Nigeria today, our national parks are established mainly to conserve wildlife with a large portion of the natural environment remaining largely the way they are without human interference. 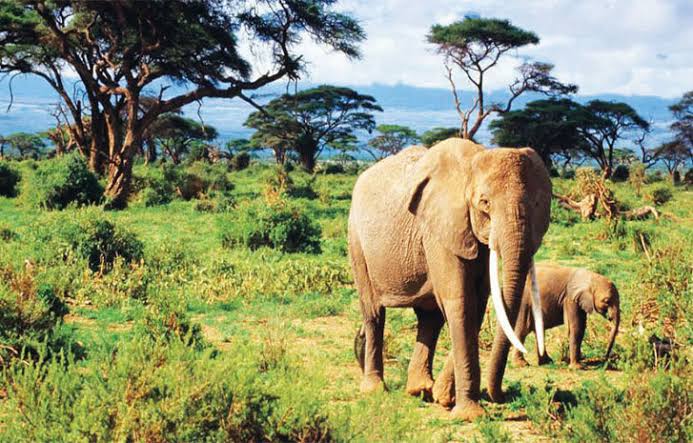 The national parks in Nigeria are some of the best tourist destinations one can visit so as to get educated and informed about certain animal species while interacting with nature at its breathtaking best by taking in all the view of the beautiful landscapes, and every other spectacle mother nature has in store for visitors and tourists at these venues. If you need comprehensive information about Nigeria’s national parks and game reserves, and you also want to know where they are located, you are at the right place and this article will help point you to the exact information you are looking for.

Before we proceed, kindly note that all National Parks and Game Reserves in Nigeria are under the supervision of the Nigeria National Park Service (NNPS), which is an organisation that is saddled with the responsibility of preserving, enhancing, protecting and managing vegetation and wild animals in the national parks of Nigeria. The NNPS is a Federal Government parastatal under the Federal Ministry of the Environment, and it is headed by a Conservator General. With that in mind, let us now proceed with details of all national parks in Nigeria today.

Below is the list of all eight (8) national parks in Nigeria this 2022 and their locations in no particular order:

The Chad Basin National Park is located within the ancient Kanem-Borno Empire which is in present day Borno and Yobe States respectively, in the North-Eastern geopolitical zone of Nigeria. This ancient Empire was established before the 10th Century A.D, and it was one of the most well known and politically organized Empires comparable to its contemporaries of Songhai and Mali Empires in Africa. The Borno Empire of old developed mainly within the Conventional Basin of the Lake Chad which Chad Basin National Park is now situated.

The Empire played a leading role in the growth and expansion of the Trans-Saharan Trade, Arabic and Islamic Learnings, Scholarship and diplomatic ties with Countries such as Egypt, Saudi Arabia, Turkey, Libya, Morocco and Spain. As a result of the Continental Trade, Islam was first introduced to what is today known as Northern Nigeria around the 11th century A.D through the Borno Empire. One of the noticeable relics of the material culture of the ancient Borno Empire which is still outstanding is the Rabeh’s Fort at Dikwa.

The Fort would later serve as a Military Operational Base for the French, German and British Colonial Troops during the colonization of West Africa at different times in the early 1900s. The Fort at Dikwa was eventually declared a National Monument on April 23, 1959, a year before Nigeria gained Independence from Great Britain. The culture of the local communities surrounding the Park is fundamentally Arabic-Islamic in nature as a result of the long interactions between the Arabs, the Kanuris and the Shuwa-Arabs during the Trans-Saharan Trade, amongst others.

The infiltration of the European colonizers into the then Borno Empire has to a certain extent influenced the local peoples’ way of life at various socio-economic, political and religious levels. Borno Empire which is now known as  Borno and Yobe States respectively, is still very famous for its famous Durbar; a grandiose royal festival of horses, camels, Procession of Princes and Princesses in regal attire, assorted war weapons, leadership and military hierarchy and martial music, with likely origin from North Africa, or even as far as India.

As aforementioned, the Chad Basin National Park is located between the two States of Borno and Yobe, and it spans a total land area of 2,258 square kilometres. The Park is composed of mainly three sectors which are located apart from one another with one Sector, Chingurmi-Duguma situated in Borno State while the other two Sectors, known as Wetlands and Bulatura Oases are located in Yobe State.

The Cross River National Park, as the name implies, is located in Cross River State, one of the 9 Niger Delta States in Nigeria that is located in the South-South geopolitical zone in the country. The park spans a total land area of about 4000 square kilometres of mainly primary moist tropical rainforest ecosystem in the North and central parts, and montane mosaic vegetation on the Obudu Plateau. It is our nation’s last Great Rainforest Reserve, and the closest to the Mangrove Swamps on the coastal region.

Together with the Korup National Park in the Republic of Cameroon, the Cross River National Park is an important biotic reserve which contains one of the oldest rainforests in Africa. It is also one of the 25 United Nations acclaimed biodiversity hot spots in the World. The Park exists in two distinct, non-contiguous divisions; Oban and Okwagwo with rich biodiversity.

The Gashaka-Gumti National Park is located in the mountainous region of North-Eastern Nigeria close to the international border with Cameroon, and immediately to the north of Mambilla Plateau. It is one of the largest and most spectacular of all the eight National Parks in Nigeria and it sits between Adamawa and Taraba States respectively. The Park shares its bothers with Faro and Tchabal Mbado National Parks in the Republic of Cameroon. The Geshaka-Gumpti National Park in Nigeria experiences varying pleasant weather conditions depending on one’s location within the Park.

These range from tropical dry humid, tropical moist humid in the lowlands to sub tropical highland weather on the high plateau around Chappal waddi, Sabere and Fillinga. Within the Park is domiciled some historic sites, one of which is the pre-1918 German fort and garrison top of Gashaka Hill once used as a watch tower by the German military expedition to that area. Graves of some fallen German soldiers could still be seen dotted around the Fort. Also, there is an English fort near Gashaka village built by the British Frontier Force who overthrew the Germans to gain the Mambilla pass which is a narrow corridor that gave access into Cameroon through the Mambilla Plateau in yesteryear.

The Kainji Lake National Park is Nigeria’s first National Park, and it was established by the merging of two former game reserves: Borgu and Zugurma in 1976 and the legal instrument setting it up was promulgated in 1979 (that is, Decree 46 of 1979).the The park was subsequently reconstituted under Acts 36 of 1991 and 46 of 1999 now Cap (act) 65 of 2004 which established additional National Parks in the country. Kainji Lake National Park is located in the northwest central part of Nigeria and it sits in between Niger and Kwara States respectively; it is located 500km from Lagos and 385km North-East of Abuja, the Federal Capital Territory.

This park is an effectively protected National Park with a total area of 5340.82 square kilometres separated into two distinct non-contiguous sectors namely Borgu sector with an area of 3970.02 square kilometres and Zugurma sector with an area of 1370.80 square kilometres respectively. The Climate exhibits wet and dry seasons from April to November and November to April respectively, and the mean annual rain fall is 1100mm – 1200mm, about 200 days. The Kainji Lake Park is a typical inselberg landscape with round hills wide pediments/plains separating them and incised river channels slopping down towards the River Niger valley. Some of the Rivers in the Park include: Oli Menei, Doro and Manyara Rivers to mention but a few.

The Kamuku National Park is located in Birnin Gwari, Kaduna State. The Park sits on a total land area of about 1,120 square kilometres and it features a typical Savannah Woodland vegetation. The Kamuku National Park shares the same ecosystem and boundary with the luxuriant Kwiambana Game Reserve in Zamfara State, separated only by a natural boundary-the River Mariga. Thus, the Park distinctly represents one of the best remaining blocks of the Sudan-Guinea Savannah vegetation in the country’s protected area system. The Park is blessed with rich biodiversity and it is a place that you should check out if you are a tourist or a traveller.

The Okomu National Park, with the slogan “The pride of our natural heritage” is the smallest of the eight (8) National Parks in Nigeria. The Park is a rainforest ecosystem gazetted from the former Okomu Forest reserve in 1935. Today, the Park is a good habitat for numerous endangered flora and fauna species. It is located in Edo State.

The Old Oyo National Park derives its name from the ruins of Oyo-Ile (Old Oyo) the ancient political capital of the Yoruba Empire. The Park comprises of two previous Native Administrative forest Reserves, the Upper Ogun (1936) and Oyo-Ile (1941) Forest Reserves. These unique ecosystem and historical relics were converted to Game Reserves in 1952 and finally upgraded to the present status of a National Parks. The Old Oyo National Park is domiciled on a total land area of 2,512 square kilometres, and is located in Northern Oyo State. This park is blessed with abundant wildlife and biodiversity and if you happen to visit it, you will be held spell bound by the amazing things nature has blessed us with.

The Yankari National Park is a very large wildlife park that is situated in Bauchi State, the North-Eastern part of Nigeria. This Park sits on land that spans a total area of about 2,244 square kilometres, and is the home of many natural warm water springs, as well as a wide variety of plants and animals. The Yankari National Park was originally created as a game reserve in 1956, but was afterwards designated the largest national park in Nigeria in the year 1991. It is one of the most popular tourist attraction sites in Nigeria and it is very crucial in the development and promotion of tourism and ecotourism in Nigeria.