In this article, Nigerian Guide has compiled a comprehensive list of FRSC ranks and salary structure this 2023. We will enlighten you our esteemed readers on how much Federal Road Safety Corps, FRSC pays its workers per month. 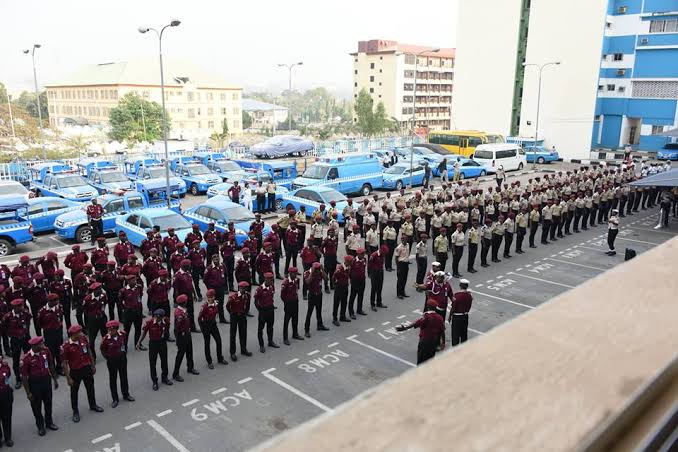 All ranks are headed by the Corps Marshal, who is the Chief Executive of the Federal Road Safety Corps, FRSC. Other salary structures like that of the Nigeria Police, Nigerian Army, Nigerian Navy, Nigerian Air Force to mention but a few are also available for your perusal.

The Federal Road Safety Corps, FRSC, is the principal federal government paramilitary agency in charge of maintaining traffic rules and regulations in the country and this is done in collaboration with other relevant security agencies like the Nigeria Police Force to make sure that traffic laws are upheld and offenders are brought to book. Her motto is “Safety First”.

The Corps was established in February 1988 by the Federal Government of Nigeria through Decree No. 45 of 1988 as amended by Decree 35 of 1992, referred to in the statute books as the FRSC Act cap 141 Laws of the Federation of Nigeria (LFN). This law was passed by the National Assembly as Federal Road Safety Commission (establishment) Act 2007.

The Federal Road Safety Corps, FRSC is statutorily placed under the Presidency with the Office of the Secretary to the Government of the Federation (SGF) as the Supervising Authority. The Governing Board has the responsibility of Policy Making, and Administration of the Federal Road Safety Corps. The FRSC Management is however, empowered with the day to day running of the Commission under the Corps Marshal and Chief Executive.

FUNCTIONS OF THE FRSC IN NIGERIA

The following are the functions of the Federal Road Safety Corps, FRSC, in the country:

The following are the various ranks in the Federal Road Safety Corps (FRSC):

For the commissioned and most senior officers, this is the order in rank from the highest to the lowest:

FOR NON-COMMISSIONED OFFICERS AND JUNIOR MARSHALS

For the non-commissioned officers and junior marshals, this is the order in rank from the highest to the lowest:

FRSC SALARY STRUCTURE IN NIGERIA 2023: WHAT THEIR OFFICERS ARE PAID

The FRSC salary structure is according to the Consolidated Paramilitary Salary Structure (CONPASS) which governs all salaries of paramilitary agencies in Nigeria. It should be noted the getting a job with the FRSC is something most graduates in the country look forward to because the agency is one of the highest paying paramilitary outfits in Nigeria. Sometimes, it may be difficult to get federal paramilitary jobs but when one eventually lands any like the FRSC, the career path is already defined and if one knows what they’re doing, they will see themselves rise up the ranks.

As is the case with other paramilitary agencies in Nigeria, salaries depend on one’s academic qualification and the more you have, the better your monthly take home pay. With this also, you are in a good position to rise up the ranks in the Commission. University graduates in the FRSC earn higher than their counterparts from the polytechnics and the pay is further reduced for those with only school certificates, therefore if you want to earn more, you are advised to get more academic qualifications to boost your salary.

Getting information about FRSC salary structure is not easy as the information is not all that readily available on the internet but Nigerian Guide dug deep to put this information up. While this was done, we couldn’t get the salary range for the Corps Marshal or any of the senior ranking/commissioned officers but we still got information on the salaries of the non-commissioned officers and junior marshals, and we believe that this will be useful information for anyone interested in knowing what the FRSC pays.

These are the current salaries per year of FRSC officers in Nigeria this 2023:

Also, the following are the salary ranges for every entry level/entry point rank of the Federal Road Safety Corps, FRSC with the required academic qualifications: