This article is about the biography and current (2023) net worth of Nigerian business mogul, Emeka Okonkwo, widely regarded as E-Money. This billionaire celebrity is an entrepreneur, investor, and the founder and funder of Five Star Music, a popular music record label in Nigeria. He is also into many other businesses, spread across the oil and gas, as well as the shipping sector in Nigeria. E-money hails from Uli, a popular town in Anambra State, Nigeria. He is the younger brother to popular Nigerian singer, KCee (Cultural Praise crooner). 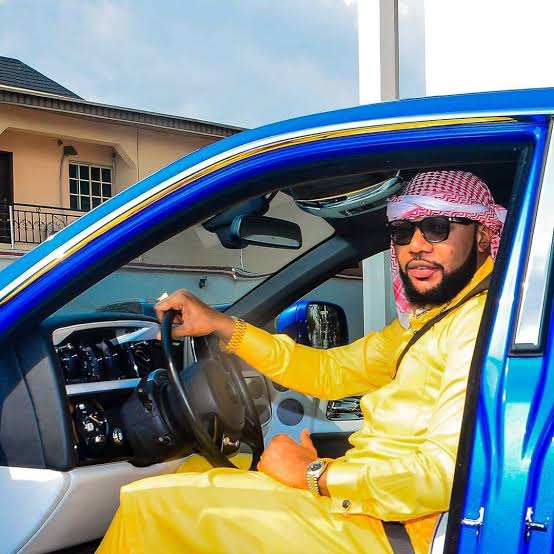 E-money was born on February, 18, 1981 and he was brought up in the Ajegunle area of Lagos State. His nickname became very popular and stuck with him after he began showing off his lavish lifestyle on social media. As a result of this, he is often widely dubbed ‘Arab Money’ by his fans as he is overly generous. He was never this affluent in terms of wealth, as his humble beginnings in Ajegunle, a place where a considerable number of poor people in Lagos State are concentrated, greatly proved to be an obstacle of some sort that almost hindered him from achieving everything that he now has.

E-money struggled so much in his early days and had practically nothing but his determination to succeed saw him rise to such a level that his net worth is the envy of many around him today. According to him, things turned around for good on his way back from his traditional wedding to his wife. His good fortune began when on their way home, he received a call that he had been awarded a contract of $2 million dollars as at that time.

E-money’s lavish lifestyle is very well documented. Popular among his flamboyant lifestyle is the launching of his machine gun, a money spraying device at the Quilox birthday party of Fuji music legend, K1 the Ultimate. He has since used the device at other high profile events such as the wedding of Ogenyi Onazi, a Nigerian professional footballer and at Actor, Mike Ezuoronye’s sister’s wedding.

Emeka Okonkwo is happily married to Juliet Okonkwo, and together, they have three children, all boys. He met her in 2003 when he was still struggling to make ends meet as a young man and she was very supportive of him. She would visit him at his poor neighbourhood in Ajegunle and they would go through a lot together. He found her qualities very rare and this made him very fond of her. He chose to remain faithful to her and eventually married her. The union has since grown from strength to strength.

Presently, E-money is the Chief Executive Officer of Emmy Cargoes, a company that was established in 1997, and was known as Borisa Nigeria Limited as at that time. He is also the owner of the popular Five star music brand that has produced best selling music artists like KCee, Harrysong, and Skiibii. He is also a major player in the maritime and petroleum industry in Nigeria as well as in real estate. Five star music is the most popular investment owned by E-Money. The company is located in Lagos State in the South-Western geopolitical zone of Nigeria, and it was established in 2010 but the record label came into the limelight in 2013 when its principal artist KCee released his hit song Limpopo.

Harrysong was signed by the record label 2013 and he recorded great hits with the label. He was in charge of the label’s voice training and directing of music videos for the brand. His popular hit song, Reggae Blues resonated well with the Nigerian populace on its release. Harrysong, however, left Five star music due to “unresolved differences” between him and the management of the brand to float his own record label, AlterPlate which has been in existence since 2016.

Skiibii, was signed to the record label in 2014 and he proved to be a success of his own with hit tracks like Ah Skiibii, London, Sampu and a host of others. He left the company three years later to pursue his own dreams of being a top musician independent of Five Star Music.

The estimated net worth of E-money this 2023 stands at a whopping $55 million. He owns a gold furnished mansion which is worth in the excess of ₦250 million in Omole Estate, Ikeja, and another in Lekki, both in Lagos State, Nigeria, as well as many landed properties. E-money also owns an assorted fleet of cars which includes a Mercedes Benz Sprinter worth about ₦30 Million and a 2017 Lexus LX 570 jeep worth over $90,000 dollars which is in excess of ₦39 million when converted to our local currency in Naira.