Pascal Chibuike Okechukwu, popularly known as Cubana Chief Priest, is an entertainer, show promoter, millionaire businessman and the owner of Club Xhrine in Owerri. His night club was established in December 2020 in the aftermath of his resignation from Cubana Group as the General Manager. 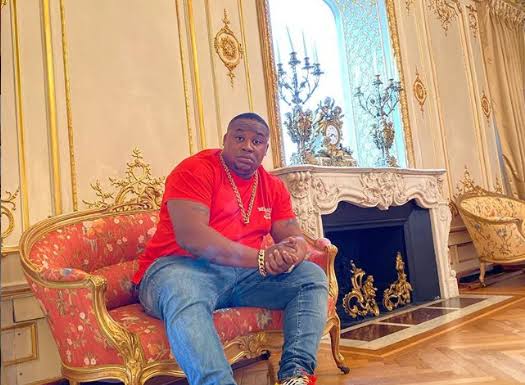 Cubana Chief Priest was born on March 26, 1982, in Umuhu Okabia, Orsu Local Government Area of Imo State. He is the second son of his parents. His formative years were in Imo State where as a child, he developed the passion for music as well as becoming a celebrity in the Nigerian entertainment industry.

He would later go on to join his father in Aba, Abia State to learn shoe making. Cubana Chief Priest made his first million as a shoe maker during his school days at the Federal Polytechnic Nekede (FEDPONEK), Owerri, even as he was chasing a career as a musician in the entertainment industry.

He grew up idolizing popular Nigerian music heavyweights like Lagbaja, Sound Sultan, to mention but a few. Due to certain unforseen circumstances, his career as a musician could not materialize, nevertheless, he determined to forge a career path as an entertainer, and show promoter which he has done to great success in recent years.

Cubana Chief Priest is successful today as a result of his determination, vision and hard work, which has made many in the country to recognize him as a celebrity in the Nigerian music industry and he is a force to be reckoned with in the nightlife club business. As a result of his show promoting prowess in the country, he has a following of more than 1 million followers on Instagram.

He has worked with a number of top music celebrities in Nigeria such as Wizkid, Davido, Burna Boy, to mention but a few and he gives preferential treatment to Davido whom he singles out as one of the people that changed his life. He has also worked with other celebrities such as BBNaija 2019 winner Mercy Eke, who he actively campaigned for during the reality tv show and after her win, he hosted her at his hotel in Owerri to a massive fan turn out.

Cubana Chief Priest was one of Mercy Eke’s major sponsors at the BBNaija 2019. Towards the end of the reality TV show, he stated that he owed Mercy five mouth watering endorsement deals when she left the house, whether she won it or not.

Mercy eventually won the Pepper Dem edition of BBNaija show and smiled to the bank with a ₦30 million cash prize, in addition to a brand new G80 SUV, a full set of home electronic appliances, an all-expense-paid trip for two to Dubai as well as another trip for two to watch a European Cup final of choice all worth an additional ₦30 million, ensuring that in all, she went home with a ₦60 million grand total.

Cubana Chief Priest was among the most vocal and strongest supporters and campaigners of Mercy while she was in the house. His campaign for mercy was so strong that people thought he bought her the victory at BBNaija 2019. After Mercy won the reality TV show, both parties fell out when it was alleged that Cubana Chief Priest demanded a favour from Mercy which she could not assist with.

Their friendship hit rock bottom after he deleted all her photos from his Instagram account and unfollowed her when she got an audio Moet Hennessey endorsement deal which allegedly turned out to be untrue according to trusted sources from the media. They have since put their differences between them and continued to be friends ever since.

Cubana Chief Priest is an accomplished businessman and a millionaire. He owns an array of cars in his fleet some of which include Rolls Royce Phantom, Range Rover, Mercedes G-Class, BMW, to mention but a few. He also owns landed properties running into several millions of naira in his native, Imo State, as well as in Lagos and Abuja.

The specifications for some of the cars in his collection such as his Rolls Royce Phantom, Range Rover, Mercedes C-Class, Toyota Prado include the following:

The Rolls Royce Phantom is an expensive car. This vehicle is truly pure class, something many people wish they had but not many can afford, its features include:

The features for Cubana Chief Priest’s Ferrari are as follows:

This jeep is a full-size, four-wheel drive really comfortable and classy car that is in the Toyota Land Cruiser mould. Cubana Chief Priest’s Prado jeep is based on Toyota’s J150 platform. It consists of ladder frame chassis, two-speed transfer boxes and rear beam axles. The J70 platform has a front beam axle while the J90, J120, and J150 platforms all have front independent suspension respectively.

This is a really classy car in Cubana Chief Priest’s fleet and it has the following features:

Being a celebrity, you are sure to expect Cubana Chief Priest to keep acquiring more automobiles in the nearest future. He lives a lavish lifestyle as can be seen on his social media accounts, flying around the globe to some of the top travel destinations in the world such as Dubai, Malaysia, the United States of America, etc., for vacations with family and friends. He is happily married and is blessed with two children, currently. His two children, Chukwuebuka and Obinna, reside in his Owerri mansion but travel frequently.

Cubana Chief Priest and Hushpuppi, one of the richest yahoo boys in Nigeria were at loggerheads on social media in early 2019 after Cubana exposed Hushpuppi that the luxury cars he always flaunts online were never bought by him, adding that they’re on rentals. Cubana Chief Priest has also exchanged words with some of his haters on social media, who have attacked him at one point or the other for his lavish style.

Currently, this 2023, Cubana Chief Priest is worth $20 million which when converted to our local currency, stands at about over ₦13 billion Naira. Most of his wealth coming from his chain of businesses as well as his event promotions.