Do you intend to do a court wedding in Nigeria but are unsure of how to proceed? Not to worry, we will show you how to get married in court in Nigeria this 2023 in this article. Although the traditional wedding and the church wedding, or “white wedding” as some may refer to it, are still the most popular types of weddings in Nigeria today, it is not uncommon to see people choose court weddings because they believe that getting a legal document from the local courts ensures that the marriage is completely valid and more solidified than the other types of weddings that we are accustomed to. 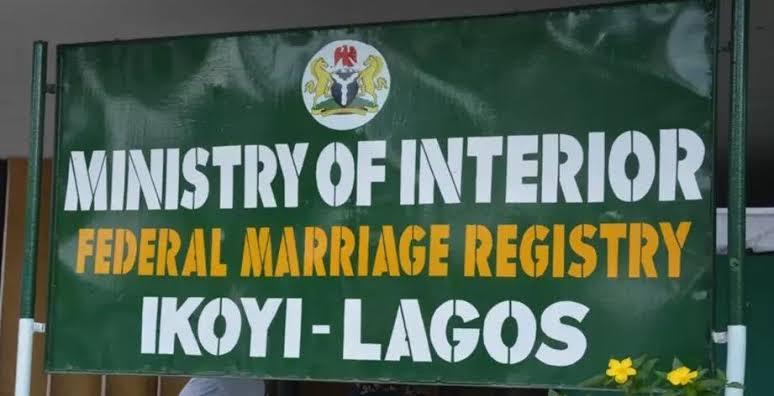 The Federal Ministry of Interior oversees the authorized marriage registries, which are the best places to go if you want to get married in a Nigerian court of law. As a result, getting married in one of the country’s marriage registries is legal, and your union with your spouse will be officially recognized by the State. In Nigeria, this is referred to as a “court wedding.”

In order to get married in court, the first step is to go to any of the marriage registries in the country and ask questions about the procedure. According to the Marriage Act, Chapter 218 of the Laws of the Federation of Nigeria, 1990, court marriages are legally protected. You will be instructed on what to do in light of this when you eventually arrive at any of the federal marriage registries that are close to your place of residence.

There are twelve (12) Federal Government recognized marriage registries in Nigeria and these are the only valid institutions that are licenced by the FG to conduct court weddings in the country. Despite the fact that in recent times, many local government areas all over the 36 states of the country now have their own registries, the only recognized marriage registries by law are the 12 and any other additions to them will be made solely by the Federal Government of Nigeria as empowered by the constitution.

Below is a full list of the 12 Federal Government recognized marriage registries in Nigeria:

GUIDE ON HOW TO GET MARRIED IN COURT IN NIGERIA 2023

The following are the step by step processes on how to get married in court in Nigeria this 2023:

STEP 1: AGREEMENT BETWEEN THE COUPLE

The couple would need to have been in a relationship for a while before anything else to get to know one another better. Once this has been determined and they decide they want to get married in a courtroom, they can go to the federal marriage registry of their choice, preferably the one that is closest to where they live, to inform the court of their plans.

The couple will need to obtain a notice indicating their intent to marry when they arrive at the federal marriage registry. This document is often referred to as “Form A,” or “Notice Form.” The couple is then required to fill out all the necessary information on this form, including their name, age, address, occupation, and marital status, to name a few.

Once the Notice Form has been duly filled and about to be submitted, the couple is to submit along with it two (2) coloured passport photographs. Once this is done, the form will be posted on the Notice board at the registry for a period of 21 days. This notice is also entered into a book known as the Marriage Notice Book which may be inspected during office hours without a fee.

Upon expiration of the notice, the couple is expected to pay a prescribed fee. The amount a couple pays depends on the marriage registry they approached, after which the registrar issues them a “Form C” if they meet certain criteria such as:

Once both parties have fully satisfied the above criteria, the registrar signs a declaration or a marriage  licence/affidavit and issues it to the couple signifying that he has passed them fit to marry. This licence is not the marriage certificate.

STEP 3: SWEARING OF AFFIDAVIT BY THE INTENDING COUPLE

The couple about to wed is expected to swear an affidavit before the registrar or a minister of a legally recognized church. During the process of swearing affidavit, the registrar would read out the following requirements and explain the penalties involved.

If the couple about to wed violates any of the rules which include:

This will lead to prosecution of any party found guilty and the person may be jailed for up to a period of five years. One of the most common violation is that of one of the claimants being married and failing to properly dissolve his/her previous marriage before entering into a new one but if there is no breach of the rules, the registrar signs a declaration or affidavit to show that the couple understands the implications under the laws of the Federal Republic of Nigeria and have met and satisfied all that they are required to do.

STEP 4: ISSUANCE OF CERTIFICATE TO THE INTENDING COUPLE

Once the necessary consent to the marriage has been gotten, the Minister will proceed with the giving of notice, he will also issue the certificate, and grant his/her licence, known as “Form D”. This Form D allows for the celebration of a marriage between both parties named in such licence.

Once the legal authorization has been granted, the couple will then choose a wedding date that is to be within three (3) months from the date the marriage notice was first placed with the registry.

This step is the most important step as it is the day of the wedding. On this day, the couple comes along with their family and friends as witnesses to finalize the marriage ceremony and become legally married. Because of the fact that many other couples are usually present at the venue for the same reason the same day, the court wedding ceremony is usually not longer than thirty (30) minutes. During the proceedings, the registrar would print the marriage certificates in duplicate and with counterfoils as in the “Form E”.

The certificate will then be signed in duplicate by the officiating minister, by the parties, and by two or more witnesses to the marriage. The minister having also signed his name to the counterfoil will deliver one certificate to the parties, and within seven days, thereafter file the same in his office. Every registrar will then register the marriage in a book called the Marriage Register Book, and every certificate of marriage is filed in his office according to the “Form F”. After this has been done, the marriage is recognized by the law as legal.