This article is about the biography of Dim Chukwuemeka Odumegwu Ojukwu who was a divisive figure in the political landscape of Nigeria. Ojukwu was Born on November 4, 1933 in Zungeru, Niger State, in the now defunct Northern Region of Nigeria, to Sir Louis Phillippe Odumegwu Ojukwu, one of wealthiest men in the country at that time, and a top businessman from Nnewi in what is now known today as Anambra State. 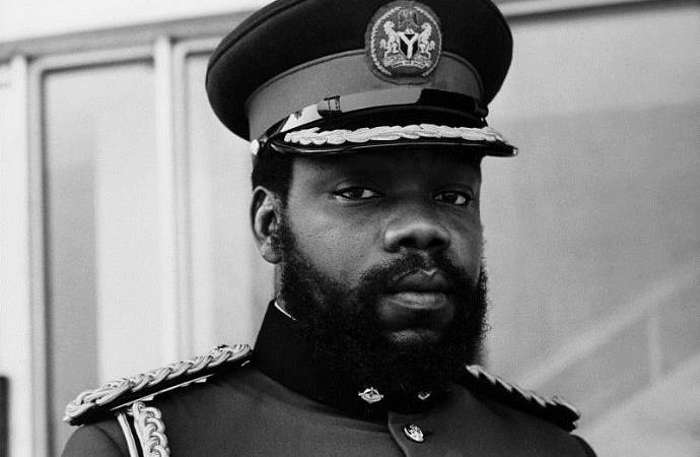 He was military governor of the eastern region from 19th January, 1966 – 27th May, 1967; and the first President of Biafra from 30th May, 1967 – 8th January, 1970. During his years of active military service, he was a Lieutenant-Colonel in the Nigerian Army, and a full General in the Biafran Army following the years when he switched sides from Nigeria to the now defunct Republic of Biafra in the Nigerian-Biafran Civil war.

Chukwuemeka Odumegwu Ojukwu began to make people take note of him even as a child when he expressed his displeasure at the attitude of one of his colonial teachers back in the day at his secondary school, King’s College, Lagos for what he perceived as being disrespectful to a black woman because of the colour of her skin. This singular act would later land him in trouble with the central authorities and in order to prevent any further confrontations with the colonialists, Chukwuemeka Odumegwu Ojukwu was sent abroad by his father to complete his studies.

While in England, he studied History and bagged a Master’s degree in the course at Lincoln College, Oxford University. By the time he completed his studies in the United Kingdom, he decided it was time to return back to Nigeria. This he did in 1956 and on his return, he was expected to take up a role in the family business which his father had expanded but to the disappointment of his dad, he decided to pursue other things, first landing an administrative officer role in the Eastern Nigerian Civil Service where he was posted to a town called Udi.

Not satisfied with his job profile in the Civil Service, Chukwuemeka Odumegwu Ojukwu decided it was time quit, and having done that, he set his sights at joining the Nigerian Army. This singular action made him stand out as one of the few Nigerian graduates who joined the military at that time. Joining the military, he did not foresee what was in store for him in his future but it sure made the world take notice when years later, he would lead his people in a secessionist movement away from Nigeria due to what he perceived as a deliberate attempt by the federal military government of the day to systematically wipe out his people from the surface of the earth through the evil means of genocide.

After he enrolled in the Nigerian Army, he made sure not to let his aristocratic upbringing get into his head, and was very humble, taking in all the lessons and trainings he received, which were going to be very valuable to him in the future. While at this, his father was still not in support of his decision, hoping that he would still have a change of heart once he saw how difficult life in the military could be. His early military career saw him posted to Kano, while there, he noticed the corrupt practices in the army.

This was as a result of the politics which was being played to fill in the roles that would be vacated by colonial officers just as Nigeria was about to be independent of Great Britain in 1960, and after which she became a Federal Republic in 1963, but fell to her first ever military rule in 1966 due to corrupt practices in the Nigerian political setting. The various events that led to the bloody military coup d’etat in the country which occurred on January 15, 1966 was as a result of the poor conduct of politicians in their pursuit of power at all costs and by any means.

The crisis reached its boiling point when there was dissatisfaction in the military about how the country was being run by its civilian leaders, engaging in corrupt practices with reckless abandon. Ministers were enjoying very affluent lifestyles and taking public funds for their personal gain at the expense of the citizenry.

Thus in 1966, Major Patrick Chukwuma Kaduna Nzeogwu and four other army officers, also majors, carried out the first military coup in Nigeria. They assassinated the Premier of the Western Region, Chief Samuel Akintola, the first and only Prime Minister of Nigeria, Sir Abubakar Tafawa Balewa, the Premier of the Northern Region, Sir Ahmadu Bello, and other prominent Nigerians. The coup was however foiled by the top hierarchy in the army.

Chukwuemeka Odumegwu Ojukwu, having learnt of this, called officers under his command to swear their allegiance to Major-General Johnson Thomas Umunnakwe Aguiyi-Ironsi, the most senior officer in the Nigerian army, who subsequently assumed power as the first military head of state of Nigeria. Ironsi’s first acts as head of the federal military government was to appoint four officers who would be governors over the four regions of the country at that time.

Emeka Ojukwu was appointed military governor of the Eastern Region, Hassan Usman Katsina was named military governor of the Northern Region, Francis Adekunle Fajuyi was set over the Western Region while David Epode Ejoor governed the Mid-western Region. After the first military coup in the country was foiled and the top hierarchy of the military stepping in to stabilise the political state of the country, Nigeria was thrown into a state of civil unrest particularly in the North as a result of the assassination of two of their most powerful leaders in Balewa and Ahmadu Bello.

This gave birth to hostilities towards people from the Southern part of the country who were living in the North as at that time. The southerners became easy targets of various attacks by the northerners, leading to the deaths of several people of southern origin, particularly those from the south-east, as well as the loss of valuable property.

This continued and those in the eastern region became very agitated, attempting to respond in kind to what the northerners had done but Chukwuemeka Odumegwu Ojukwu would not let that happen, discouraging them from retaliating and calling for peace instead. What was to follow would be unexpected and shocking.

The unexpected happened on July 28, 1966, when a group of Northern soldiers staged the second Nigerian military coup also known as the counter coup. The soldiers were led by Lieutenant-Colonel Murtala Muhammed and they termed this the July rematch, a response to the earlier coup of January in the same year. Other notable participants in the counter coup are Theophilus Danjuma and Martin Adamu.

Since the first coup was carried out by mostly Igbo officers who killed top northern leaders, the second coup was in response to that and it started out as a mutiny in the Nigerian Army, involving many northern military officers. The coup targeted Igbo officers in the army and this led to the assassination of Nigeria’s first military Head of State, Major-General Aguiyi-Ironsi and Lieutenant-Colonel Adekunle Fajuyi who was at that time hosting Ironsi in Ibadan.

The counter coup produced Lieutenant-Colonel Yakubu Gowon as Head of State after he was appointed by the coup conspirators to take over the federal military government. Ironsi’s deputy, Brigadier Babafemi Ogundipe, who was more senior in military rank to Gowon was snubbed by the coup conspirators in favour of Gowon’s ascendancy after four days of talks. Ogundipe was later sent to London as Nigeria’s High Commissioner.

REASONS FOR THE COUNTER COUP

The reasons for the July 1966 counter coup stemmed from the following:

In the eastern region, news filtered in of what was going on in the north. This led to restiveness arising from the pogrom. Calls were made to respond to the massacres in the north, Igbos were encouraged by their relatives to return to their homes in the east, various efforts to calm the tensions proved abortive and Nigeria was getting closer and closer to a full blown civil war. Ghana intervened and organised a conference on January 5-7, 1967 termed the Aburi Peace Conference for the leaders of the aggrieved regions in the country to meet and restore peace to the nation.

This conference was organized in Aburi, Ghana at the request of Lieutenant-General Joe Ankrah, the Head of State of Ghana at that time. Thus, this was the first official meeting of all members of the Supreme Military Council. Due to the nature of the counter coup, Ojukwu refused to attend any SMC meeting within Nigeria, for security reasons, so meeting in Ghana, a neutral ground was the best option.

At Aburi, it was settled that the conference was the only way to prevent the breakout of a looming civil war and that it was best to embrace peace and solve Nigeria’s political issues diplomatically. Peace was the last chance to save Nigeria from impending anarchy and it turned out that all parties involved agreed to this but on returning to the country, the situation of things did not change, it instead grew worse as the hostilities between the North and the South-East continued.

SECESSION OF BIAFRA AND THE NIGERIAN CIVIL WAR

Enugu witnessed the arrival of many headless bodies from the north and Ojukwu, true to his words to secede if the eastern region was pushed out of Nigeria, did just that. The Aburi accord was not kept so on May 30, 1967, Ojukwu took the eastern region out of Nigeria, seceding from the rest of the country and declared the region a Sovereign State which he called the Republic of Biafra.

His actions led the Head of State of Nigeria at that time, Gowon on July 6, 1967 to declare war on Biafra and and attack it. The war lasted for thirty months (two years and six months) from July 1967 – January 15, 1970. Ojukwu led Biafra with grace and was supported by some foreign nations which recognized the young nation’s sovereignty.

After several months of fighting and being stretched to its limit, Biafra could not hold on anymore as the Nigerian forces, backed by the help of some of the world’s great powers, notably Britain and the Soviet Union used every means possible, including food blockades to overwhelm Biafra, thus forcing the young nation to surrender.

On January 9, 1970, Ojukwu handed over the details of the surrender to his deputy, Major-General Philip Effiong, and fled to Cote d’Ivoire to seek political assylum which the then Ivorian President Felix Houphouet-Boigny granted him. After the surrender, Gowon declared “No Victor, No Vanquished”. Ojukwu remained in exile, in Cote d’Ivoire, settling there and setting up successful businesses that would benefit him all through his stay there.

He could not return to Nigeria until 1982 when the President, Shehu Shagari granted him political pardon. On his return to the country, he joined the ruling National Party of Nigeria and contested and lost the Nnewi Senatorial elections.

He continued to be a man of influence in the country until his death on November 26, 2011 in London after a brief illness. He was accorded the highest military accolade and a funeral parade on February 27, 2012 in Abuja. His remains was buried at his compound in his home town Nnewi, Anambra State on March 2, 2012.