In this post, Nigerian Guide brings you the Biography and Net Worth of Anthony Joshua this 2023 plus other interesting details about him that you may not have known. 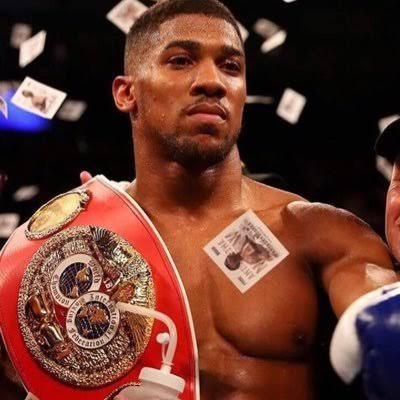 Anthony Oluwafemi Olaseni Joshua (full name), is a British born Nigerian professional boxer. He is a two-time unified heavyweight boxing champion of the world, holding the WBA (Super), IBF, WBO and IBO titles simultaneously. This he first did between 2016 and June 2019 before reclaiming all four titles again on December 7, 2019 in Saudi Arabia.

He was born in Watford, Hertfordshire, England on October 15, 1989 and from the date, you can deduce his age. Anthony Joshua is the son of a Nigerian-Irish father, Robert Joshua, and a purely Nigerian mother, Yetunde, also known as Yeta Joshua (Nee Odusanya). He has three siblings, two sisters and a brother, namely Janet, Loretta and Jacob. He is of Yoruba origins and the Yoruba Language is one of the most popular spoken languages in Nigeria.

In his early years, Anthony Joshua spent some time in Nigeria, attending Mayflower Secondary School, Ikenne, Ogun State, before returning to the United Kingdom with his mother after his parents divorced when he was just 12 years old to continue his education at Kings Langley Secondary School. These are the two colleges he attended before proceeding to become a boxer.

While growing in Meriden Estate, Garston, Hertfordshire, Joshua was fondly addressed as ‘Femi’ by his friends and former teachers, due to his middle name ‘Oluwafemi’. Prior to becoming a boxer, he was very competitive in football and athletics.

Anthony Joshua began his amateur boxing career in 2007, at the age of 18, and he is considered a late starter in the sport. He joined the Club, Finchley ABC in Barnet, North London, where he won his maiden Haringey Box Cup in 2009.

In 2010, Anthony Joshua won the Great Britain Amateur Boxing Championships and was named Amateur Boxer of the Year by the Boxing Writers Club in 2011. At the 2011 World Championships, he won a silver medal and a year later in the 2012 Summer Olympic Games held in London, he won gold.

Anthony Joshua became a professional boxer in the summer of 2013. His first heavyweight boxing match was against Italy’s Emanuele Leo on October 5, 2013 which he won by Technical Knock Out (TKO) in the first round.

By 2014, he reached an impressive record of 9-0 with a victory over Russia’s Denis Bakhtov for the WBC International Heavyweight Title. Anthony Joshua won the Commonwealth heavyweight title in September 2015, and three months later, he followed it up by winning the British heavyweight title.

In April 2017, Joshua defeated Wladimir Klitschko to defend his IBF heavyweight title. Following it up with a 7th round knockout victory over Alexander Povetkin in September 2018. Joshua’s record by late 2018 stood at an impressive 22 wins and 0 losses.

Talk of a rematch between Joshua and Klitschko started making the rounds soon after in which Klitschko stated that he needed time to review his situation before agreeing to a rematch.

On August 2, 2017, Joshua revealed he would need to start a three-month training camp that would commence on August 22, 2017, if he was to fight a rematch with Klitschko on 11 November, the fight never happened as Klitschko announced on his website and social media channels that he was retiring from the sport of boxing. This effectively ended the possibility of a Joshua v Klitschko rematch. Joshua later fought with Alexander Povetkin in 2018 and won.

In December 2018, Anthony Joshua was due to face Dillian Whyte in a heavyweight match in Wembley. This was to be a heavyweight rematch that Joshua had first won, earning £3 million at that time.

There was a back and forth issue about the match as Whyte claimed to have heard rumours that Joshua was planning to cancel their Wembley date and instead fight American contender Jarrell Miller at Madison Square Garden, in New York City.

The back and forth issue on the Joshua v Whyte fight continued when on January 12, 2019, Whyte revealed that he had turned down a ‘severe lowball’ offer from Joshua to fight him in a rematch.

Whyte however, did not reveal the amount of money he claimed to have been offered by Joshua to fight him, the controversy continued when Whyte further claimed that Joshua did not want to fight him, as he had known since September 2018 that he would be fighting in April 2019, yet did not make any offers.

On February 1, it was becoming highly unlikely that Joshua would still fight Whyte at the Wembley Stadium, leading Whyte to proclaim that the Joshua fight ‘was dead’ and he was to look at other options, including a potential fight with Dominic Breazeale.

Jarrell Miller, following the abandonment of the Joshua v Whyte fight stated his intentions to fight Joshua and on February, 8, 2019, terms were agreed for Joshua to defend his unified heavyweight titles against Miller (23-0-1, 20 KOs) on 1 June at Madison Square Garden in New York City, effectively marking Joshua’s US debut.

The Joshua v Miller fight became the highest grossing pre-sale in the arena’s boxing history. The launch presser began to heat up right from the start after Miller shoved Joshua during their first face off. It eventually settled down and both parties took to their seats. From there on, it was a back and forth verbal exchange, before Miller stormed off the stage.

Joshua stayed and answered any remaining questions from the media. It was reported that Joshua would earn £19.3 million ($25 million) for his US debut. Another report claimed Joshua was to earn an estimated $32 million. Miller on the other hand, was to receive a career-high pay packet of $4.875 million due to his deal with DAZN which would include two more bouts on DAZN worth $3 million.

On April 17, 2019, both camps confirmed the Voluntary Anti-Doping Association had informed them that Miller had tested positive for the banned substance GW1516. The test results were from a random VADA-conducted urine test Miller submitted to on 20 March. Further tests taken on 31 March proved positive for EPO, HGH and GW1516 again, hampering any chances of his fight with Joshua happening.

Andy Ruiz Jr. (31-1, 20 KOs) put his name forward to replace Miller and challenge Joshua for the unified heavyweight titles on 1 June 2019. On 22 April, Ruiz confirmed his team had meeting scheduled with promoter Eddie Hearn, officially putting himself in the running.

Terms were agreed within a week. On May 1, with one month to go before the fight night, the matchup Joshua vs. Ruiz was confirmed and announced to take place at Madison Square Garden in New York City exclusively on DAZN in the United States.

Ruiz was to earn around $7 million (£5.36million) for the fight. On the match night, Anthony Joshua dropped Ruiz Jr. in the third round, for the first time in the challenger’s career. Ruiz Jr. beat the count, and scored his own knock down moments later. Joshua was down again towards the end of the round in a massive turn around.

At the time of stoppage Ruiz Jr. was leading the fight 57–56 on two scorecards and Joshua was leading 57–56 on the other. It is considered to be one of the biggest upsets in the history of boxing.

On December 7, 2019, a rematch in Saudi Arabia took place, Joshua beating Andy Ruiz Jr. unanimously on points and regaining all four of his heavyweight titles.

Anthony Joshua is not yet married but he is a father. He has a son with his ex-girlfriend, Nicole Osbourne in an on-and-off relationship. His son’s name is Joseph Bayley Temiloluwa Prince Joshua.

Anthony Joshua is not a knight but an Officer of the Most Excellent Order of the British Empire (OBE), a title conferred on him by Charles, Prince of Wales, on behalf of Her Majesty the Queen, Elizabeth II on December 20, 2018, for his services to the sport of boxing as well as his achievements.

Apart from boxing, Anthony Joshua loves games like Chess, which enables him to improve his tactics, something that has become a key potential and valuable skill which has been evident in his victories in the boxing ring. He has also shown keen interest in football and athletics.

In 2009, Anthony Joshua was placed on remit, based on a depiction of violence and an electronic tag was set on his ankle after his release.

He was halted by the police and booked for over speeding in 2012. Hidden in his car were Class-B drugs. He pleaded guilty at court and was sentenced to 12 months without pay and a suspension from the Great Britain boxing squad.

Anthony Joshua invested in a Members-only fitness gym in 2016 which commenced operations in January 2017. He did this in collaboration with the instigators of BXR along with some other health personnel, BXR boxers and boxers of the MMA.

His cousin, Ben Lleyemi is also a full-time boxer, as both both Joshua and Lleyemi made their professional boxing debuts in 2013.

Anthony Joshua’s net worth this 2023 currently stands at about $150 million in US dollars. He is up there as one of the richest boxers in the world and his net worth is significantly positively impacted by many of his investments, bonuses, endorsement and sponsorship deals with top brands like Beats Electronics, Jaguar, Hugo Boss, British Airways, Under Armour and Audemars Piguet.